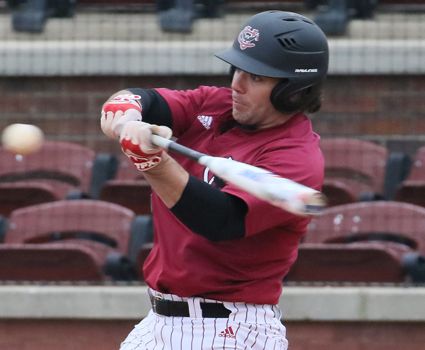 LEBANON, Tenn. – Richard Carter hit a pair of two-run homers and Cumberland pounded out 13 hits in a 9-3 victory over Lyon College in the opening contest of a three-game series Friday at Ernest L. Stockton Field-Woody Hunt Stadium.

The two teams finish the series Saturday with a Noon doubleheader.

Carter belted two-run homers in the first and eighth innings and scored three times while Gabe Lares doubled twice and scored two runs for the Phoenix (5-3). Ryan Dickison and Hector Viera each collected two hits for CU as well.

Mike Melendez (1-1) battled through five innings, allowing one earned run on three hits. The lefthander walked five but struck out eight, getting in-and-out of trouble and working around 10 baserunners. He struck out five straight batters in the first and second innings and also avoided a big inning in the fifth despite an error, two walks and a single.

Mitch Langer tossed the final four innings to pick up a save, giving up one run on three hits. The righthander walked one and struck out nine of the 16 batters he faced.

Lyon starter Cole Ragsdale (2-1) suffered the loss, allowing six runs on 10 hits in 7.0 innings. He walked one and struck out three for the Scots, who posted six hits but stranded 10 runners and did not take advantage of six walks by Cumberland hurlers.

Melendez walked a pair of runners in the first and the Scots had runners on first and third with no outs, but Melendez struck out the next two batters and Kyle Allen gunned down a runner at second to end the threat.

Lares led off the bottom of the inning with a double to rightcenter before Carter’s first two-run shot. Nick McGrew started another rally for the Phoenix with a bunt single with two outs and Melendez then walked. Ryan Dickison’s followed with an RBI single to left before another run came across on an error for a 4-0 advantage.

Lares started the second inning with another double, went to third on Carter’s groundout and scored on Josh Croft’s single through the left side.

The Scots got on the board in the third when Trey Spencer led off with a double, moved to third on Kris Kohlstedt’s groundout and came across on an infield single by Kyle West.

In the fifth West reached on a two-out error by first baseman Tyler Yorko and Moore walked. Wooten then singled to left, plating West, and Sitzman also drew a free pass, but Reddick struck out to end the inning without any further damage.

Carter was hit to start the seventh inning for Cumberland and scored on Yorko’s double down the leftfield line.

In the eighth Dickison singled and Hector Viera doubled before a walk to Bo Saunders, but Dickison was thrown out trying to score on a wild pitch. Viera came across on a sacrifice fly by Lares before Carter’s second two-run homer put the home team ahead, 9-2.

Kohlstedt doubled with one out in the ninth for Lyon and pinch-hitter Bradley Marquez followed with another two-bagger, but Langer struck out the final two batters of the game to finish off the victory.