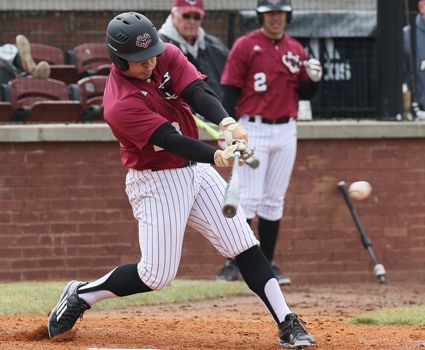 The loss ended a four-game winning streak for Cumberland (7-3), who left five players on base in the first two innings, missing chances to break the game open early. Dickison’s two-run homer in the fifth gave CU a 4-2 edge, but RBI singles from Alfred Cruz and Omar Gomez for TWC in the sixth knotted the game at four.

In the seventh Wardy Polanco led off with a walk and Sully Rios Reyes was hit by CU reliever Caleb Pitts. Marlor Villafana grounded up the middle for what looked to be a doubleplay, but the relay throw from Josh Croft was high, allowing Polanco to score on the play with the go-ahead run.

Ryan Hartman (1-0) picked up the win with four innings of relief for Wesleyan, striking out nine and allowing just two hits. The lefthander did not walk a batter and was the fourth hurler of the day for TWC.

Pitts (0-1) suffered the loss, allowing both batters he faced to reach in the seventh, wasting a good effort from Mitch Langer in his first start. The righthander allowed four runs on six hits in six innings with nine strikeouts. He also walked six, laboring in his final inning.

Dickison and Hector Viera each registered two hits for the Phoenix, with Viera plating Dickison with a two-out single to center in the third after a double from Dickison.

Gabe Lares and Richard Carter each led off the bottom of the first with singles for CU and with two outs, Mike Melendez doubled down the rightfield line, plating a run.

In the second Kyle Allen doubled with two outs before Lares walked and Carter was hit, loading the bases, but Croft flied out to center to end the threat.

Wesleyan plated two runs in the third, starting with a single to left by Gomez. Pedro Barrios also singled with one out and the runners moved up on a passed ball before a walk to Polanco loaded the bases.

Reyes’ ground ball to the left side scored Gomez and Polanco and Reyes stole second and third with Villafana at the plate. On the next pitch after the stolen base and with Langer in the wind-up, Polanco took off for home and slid just under the tag of Allen, swiping the base and putting TWC ahead, 2-1.

Cumberland quickly tied the game in the third when Dickison doubled to rightcenter with two outs, went to third on a passed ball and scored on Viera’s single to right.

Dickison put the Phoenix ahead again in the fifth after a leadoff single by Croft. A groundout and fly left pinch-runner Daijon Whitfield at second base with two outs, but Dickison ripped the first pitch from Diego Ibarra over the wall down the leftfield line, a line drive two-run homer, his first of the year, for a 4-2 CU advantage.

The lead didn’t last long, though, with Villafana leading off the sixth with a free pass. He should have been doubled off on a line drive by Luis Estevez, but Nick McGrew’s throw to first was wild.

Cody Stroud then walked and Cruz singled up the middle, past a diving Croft, plating Villafana. Gomez followed with a ground ball through the hole on the right side, scoring Stroud and knotting the game at four.

Cumberland had one good scoring chance against Hartman, with Viera singling to left with two outs in the eighth and Jarrett Plunkett following with a bunt single, but pinch-hitter Tyler Yorko struck out to end the inning.