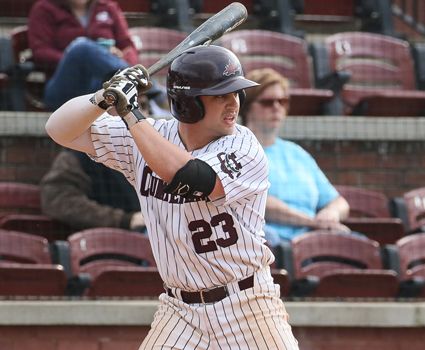 LEBANON, Tenn. – Cumberland scored 11 runs in the fourth inning to win the opener, 11-1, but Judson University plated six runs on three hits, three walks and an error in the sixth to win the second game, 8-4, and split the doubleheader in baseball action here Saturday at Ernest L. Stockton Field-Woody Hunt Stadium.

The Phoenix (10-5) missed a chance to sweep the four-game series from the Eagles (8-8), but Luke Rojas’ two-out, two-run double tied the game at four and he scored from second on an infield single two batters later. Judson plated two more runs on a throwing error and Alex Galik’s RBI single capped the six-run inning for the visitors.

Mark DeYoung (3-0) allowed five runs on five hits in six-plus innings, striking out eight. Alec Berry got the final three outs for his first save, giving up one hit and striking out one.

Tyler Yorko singled, Hector Viera walked and Mike Melendez was hit to load the bases in the seventh and Josh Croft drove in a run with a two-out single to center, but Richard Carter’s line drive to deep center ended the contest.

Rojas went 3-for-5 with two RBIs and Sam Colon scored twice in the win for the Eagles.

Cumberland plated a run in the first in the opener when Melendez walked and Carter followed with a chopper through the hole on the right side, putting runners on the corners. McGrew’s sacrifice fly to rightcenter made it 1-0 after an inning.

In the third Lares drew a leadoff walk and Melendez singled to right. McGrew’s one-out single to center plated Lares and Croft’s hard ground ball to first, knocked down by a diving DeYoung, who saved a double and probably a run, still scored a run for a 3-0 advantage.

The Eagles got on the board in the fourth with a one-out single by Troy Vandenbroek and he stole second. Tyler Behrendt’s two-out single to right scored Vandenbroek, cutting the CU lead to 3-1.

Cumberland sent 17 batters to the plate in the bottom of the inning, plating 11 runs on seven hits and six walks against three Judson pitchers.

Mitch Langer led off with a single and Allen hit a line drive off the glove of the third baseman with one out. Lares walked, loading the bases, and Melendez dumped a single in short leftfield down the line, plating a run. Carter walked, forcing in a run, and wild pitches allowed Lares and Melendez to come across. McGrew struck out swinging but reached on a wild pitch and Carter scored on the play.

Croft drew a free pass and Dickison followed with an RBI single down the leftfield line. Langer walked, loading the bases, and Viera singled up the middle, driving in a run. Allen then collected his second hit of the inning, a single to left, scoring another run.

Daijon Whitfield walked, forcing in a run, and Melendez blooped his second single of the inning to short left near the line to push another run across. Carter’s groundout scored the final run of the inning, though not before the sixth and final free pass of the frame.

Cumberland got two more runs in the fifth, with Parker Cash and Kyle Howard both hit to start the inning. Taylor Dorsey’s grounder to third was thrown away, allowing Cash to score, and Whitfield and Brian Conn were both hit as well, forcing in the final run of the contest.

Cumberland started quickly in the second game as well, starting with a two-out walk in the first to Carter, who went to second on a wild pitch and took third on a throwing error by the catcher. McGrew then lined an RBI single into center and Dickison followed with a two-run homer to rightcenter, his second of the year, for a 3-0 lead after an inning.

Judson’s Conor Grove was hit to start the second inning and pinch-runner Colon went to second on a wild pitch. He scored on Andrew Siegler’s RBI single to left, but a nice backhand play from first baseman Yorko ended the inning without any further damage.

Tevin Brown was hit with two outs in the fourth for the Eagles and Rojas followed with a single to right. Mollett uncorked a wild pitch that catcher Grant House could not find. The ball rolled almost to the Cumberland dugout and Brown scored on the play, cutting the Phoenix lead to 3-2.

Judson broke through for six runs in the sixth inning on just three hits and one big error by the Phoenix, but the frame started with walks to Galik and Siegler. Tanner Kehrer walked with one out to load the bases, but Cruz got Brown to flyout.

Rojas delivered a two-run double to leftcenter, knotting the game at four, and Cumberland’s defense let it down from there. DeYoung was intentionally walked and Ron Sessler grounded to second, but Yorko broke for the ball and couldn’t get back to the bag. Cruz didn’t get there either and Rojas never stopped running from second, scoring on the play.

Justin Kovalsky was hit before a grounder to short by Vanderbroek, but McGrew’s throw sailed over Yorko’s head at first and two runs came across. Galik then singled to left, plating the final run of the inning for an 8-4 Judson advantage.

Cumberland plays a doubleheader at Talladega College on Tuesday at Noon before returning home next weekend to take on Culver-Stockton.