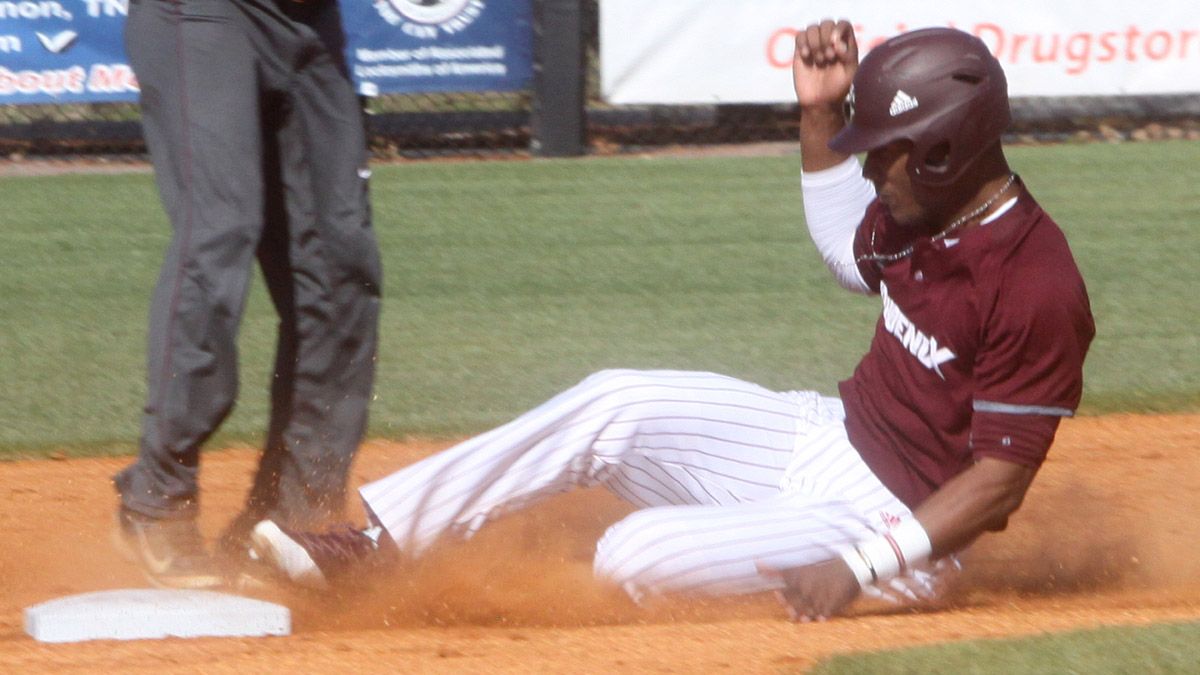 The Lions trailed 4-1 and scored twice in the seventh, but Mitch Langer got a strikeout and then pinch-runner Collin Baber was thrown out trying to score on a ball that got past the catcher. Freed-Hardeman was unable to take advantage of a pair of walks in the eighth and ninth innings, with Curtis Hoppe striking out the final two batters of the eighth and getting out of his own jam in the ninth.

Krajnak and Nick Mira each collected two hits for the Phoenix (3-5), who scored twice in the first and added two more runs in the fourth. Six Freed-Hardeman hurlers allowed eight hits with four walks and five strikeouts.

Smith (1-0) tossed five shutout innings before giving up a solo homer in the sixth, but the redshirt freshman did exactly what head coach Woody Hunt wants from every starting pitcher – limit the walks and keep the team in the game. The righthander allowed seven hits with one walk and two strikeouts.

Hoppe walked two and struck out three to get his first save.

Griffin Siebert posted two hits and drove in a pair of runs with a single in the seventh for FHU (3-4), while Aden Campbell added two hits as well.

Cumberland started quickly with two runs in the first, with Jordan Hunt dropping a single into rightcenter with one out before Krajnak drilled a two-run homer to rightcenter, his third home run of the year.

The Phoenix added to the lead in the fourth with a two-out ground ball single through the left side by Janson Neff. Mira dumped a double down the rightfield line and Bo Saunders fought off a pair of two-strike pitches before driving in both runners with a single to center for a 4-0 CU advantage.

Cumberland threw out a pair of Lions runners trying to take an extra base, with Campbell singling with one out in the FHU fourth. Darcy Moore then doubled down the leftfield line, but Campbell was gunned down easily at the plate on a good relay from Steven Hollis to Hector Morales to Mira.

In the sixth, Chase Young belted a solo homer to right before Campbell singled to rightcenter but was thrown out by Kevin Connolly trying to stretch it into a double.

With Cumberland ahead 4-1 in the seventh, reliever Justin Flores got a groundout to start the frame before walking the bases loaded, though he did pick off one runner but the Phoenix botched the rundown. Siebert drove in a pair of runs, prompting a pitching change, and Mitch Langer struck out Young and made a nice catch and tag on the play at the plate to get Baber.

But Langer lost command in the eighth, getting a flyout before issuing two walks. Hoppe struck out Wes Brooks and Collin McPherson, both looking, to end the threat.

In the ninth Bryce Lester walked to leadoff and Siebert got a free pass with one out, but Young lined out to leftcenter and Quinn Frost popped out to short center to end the contest.

Cumberland hits the road this weekend for a three-game series at Lyon College beginning with a single game Friday at 2 p.m.