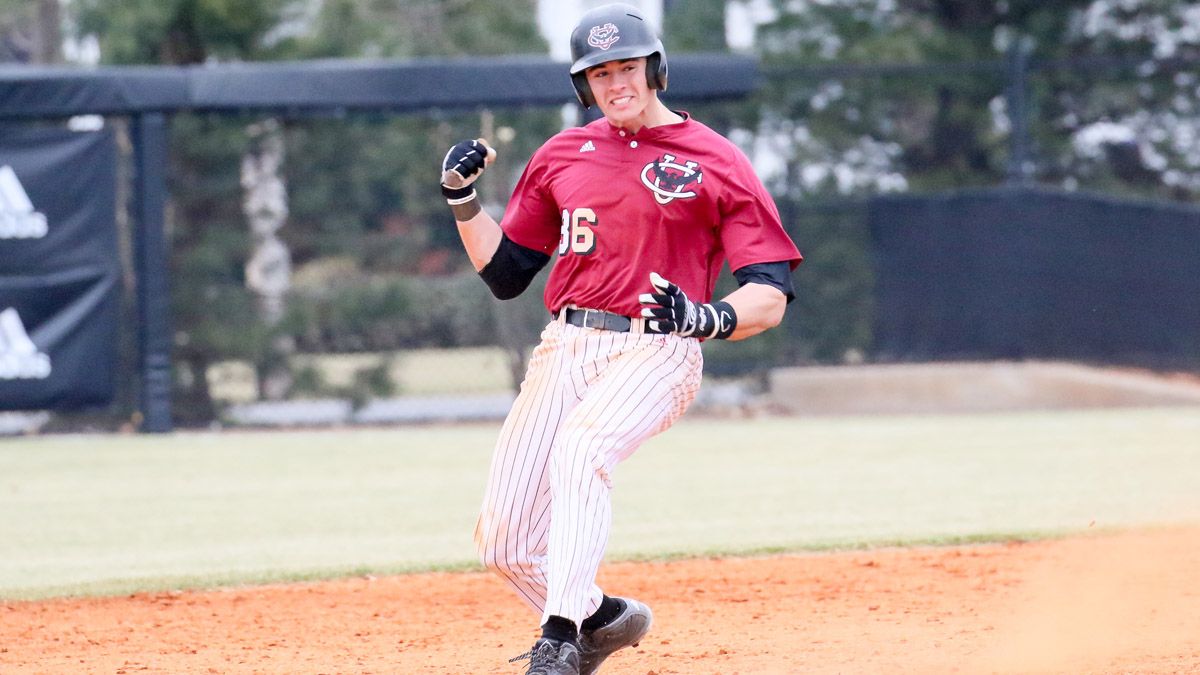 LEBANON, Tenn. – Mitch Langer and Travis Dohr each tossed seven shutout innings to pick up victories on the mound and Cumberland exploded for seven runs in the final two innings of the second contest, posting 1-0 and 10-0 victories over Lyon College in baseball action Friday in Batesville, Ark.

Dohr (2-0) won the seven-inning opener with seven shutout frames, allowing three hits with three walks and eight strikeouts. The righthander worked around an error and a walk in the first inning, retiring 14 of the next 17 batters.

The Scots threatened in the sixth inning after a leadoff double, but Dohr got a groundout and a fly ball before another error and walk loaded the bases, but Logan Reddick grounded back to the pitcher to end the threat. Another error in the seventh by the Phoenix put the tying run on base, but Dohr struck out the final two batters to end the contest.

Hector Morales drove in the game’s only run with an RBI single in the sixth, plating pinch-runner Taylor Dorsey after a two-out single from Nick Mira and a walk to Austin Krajnak. Tyler Tognarine (2-1) suffered the loss, giving up five hits with one walk and seven strikeouts.

Langer (1-1) struck out 13 and allowed just one hit and three walks in seven shutout innings in the second game. The only Lyon hit came with two outs in the first innings. He worked around at least one baserunner in the first five innings before retiring the final seven batters he faced. Evan Flener got a 6-4-3 doubleplay to end the game, tossing the final inning.

The Phoenix plated three runs in the fifth to get on the board before adding seven combined runs in the seventh and eighth. Krajnak posted two hits and three RBIs, Morales and Mira both drive in two runs and Rayden Sierra and Kevin Connolly, the top two hitters in the lineup, combined for four hits and five runs scored. Austin Voeller added a pinch-hit two-run homer in the seventh as well.

Cumberland managed just three baserunners in the first five innings against Tognarine – a single from Krajnak in the first, a double by Morales in the fourth and Bo Saunders reached on an error in the fifth. Caleb Kellogg’s pinch-hit single started the sixth, but Connolly’s bunt attempt turned into a 1-4-3 doubleplay.

Mira singled with two outs and Krajnak walked before the RBI single from Morales pushed the only run of the game across.

Dohr worked around an error and a walk in the first three batters of the game before settling down and giving up a single in the third and fifth innings and a walk in the fourth. The Scots best chance to score came in the bottom of the sixth after CU had just scored.

Will Lindsey led off with a double, but he was thrown out trying to take third on a ground ball to short two batters later by Easton Moore. With two outs Jordan Braswell reached on an error and Keegan Floyd walked, loading the bases, but Reddick grounded back to the pitcher to end the threat.

Conolloy led off the second game with a triple but was stranded there and the Phoenix had just three other baserunners in the first four innings against Lyon starter Cole Jenkins (0-2), who allowed two earned runs on six hits with eight strikeouts in six innings.

Cumberland broke through in the fifth with three runs, starting with a one-out single by Jordan Hunt. Connolly reached on an error by the shortstop, allowing Hunt to take third on the play. Sierra then doubled down the rightfield line, plating the first run of the game, and Krajnak traded places with Sierra, doubling to center and driving in another run. Morales made it 3-0 with a groundout.

Langer was working in-and-out of trouble, with the Scots putting together a single and a walk in the first as well as a walk in the second and fifth innings and hit batters in the third and fourth.

The Phoenix added two more runs in the seventh, with Sierra tripling with one out and scoring on a ground ball by Krajnak that was booted. He stole second and came across on Mira’s two-out single to left.

In the eighth Kellogg walked and went to second on Corey Meikle’s sacrifice bunt. Voeller then belted a two-run homer to increase the lead to 7-0.

Connolly doubled and went to third on a balk before Sierra reached on an error by the first baseman, putting runners on the corners. Krajnak and Morales drove in runs with singles and Mira’s groundout plated the final run of the game.