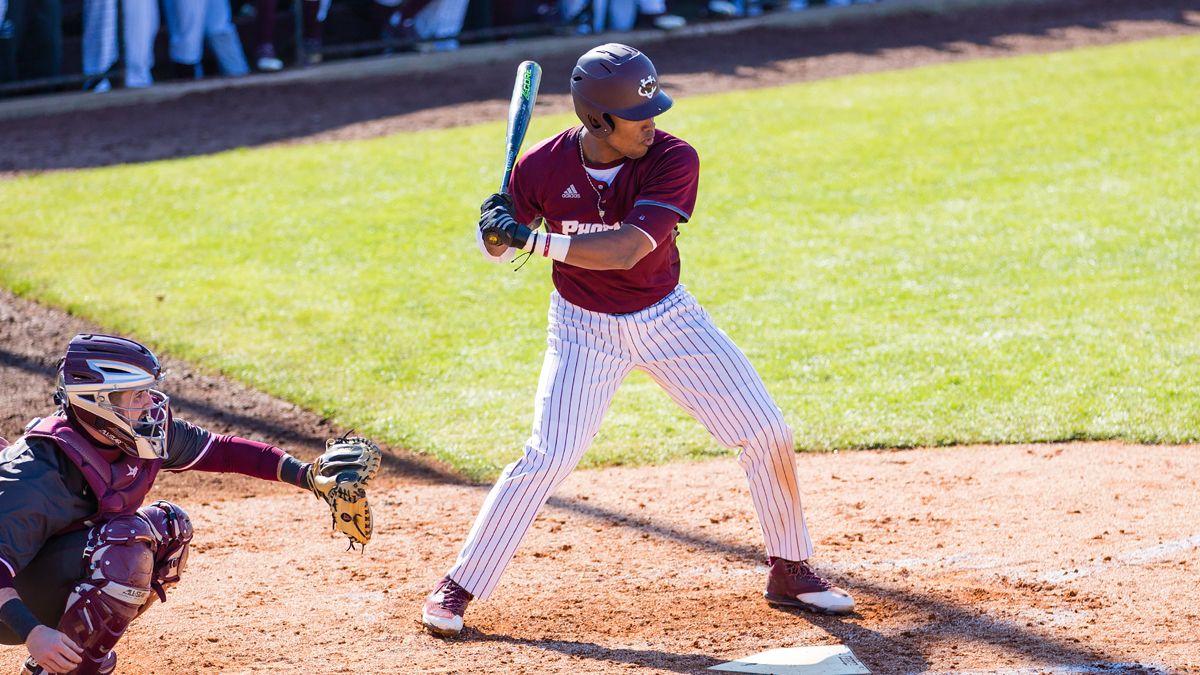 LEBANON, Tenn. – Nick Mira and Rayden Sierra each hit home runs in an eight-run fifth inning in an 11-7 Cumberland victory, but Clarke University scored three times in the seventh in the second game, winning 6-4 to earn a split of the doubleheader in baseball action on a windy Friday at Ernest L. Stockton Field-Woody Hunt Stadium.

With winds gusting over 20 miles-per-hour and blowing straight out to centerfield, the teams combined for 11 home runs among the 34 base hits in the two seven-inning contests. Sierra hit a homer in each game and Austin Krajnak finished with three round-trippers for the Phoenix (7-6), who had their five-game winning streak snapped with the loss in the second contest.

Sierra was 3-for-4 with three RBIs and three runs scored in the opener, including a three-run homer that put Cumberland (7-6) ahead for good in the contest. Kevin Connolly’s two-run blast capped the eight-run fifth inning for CU and he scored twice, while Krajnak posted two hits with a solo homer and a triple and also scored twice.

Travis Dohr (3-0) scattered 11 hits and allowed just three earned runs to remain undefeated on the mound. He walked three and struck out five, retiring 13 of the last 19 batters in the contest after a rough start.

Steven Hollis and Krajnak both homered in the first inning to give the Phoenix an early lead in the second contest and Krajnak added another solo shot in the fifth. The Crusaders tied the game at three with two runs in the sixth, but Sierra’s solo blast gave CU the lead again in the bottom of the inning.

Things came apart in the seventh, with Kevin Hunley tying the game with a solo homer to start the frame. Two singles and a throwing error by CU reliever Jason Wullenwaber loaded the bases for Clarke and Stanley Gawelko’s RBI single and a run-scoring groundout by Austin Gehl put the Crusaders ahead, 6-4.

Clarke starter Tanner Lupton allowed four runs on five hits in six innings, striking out nine, to pick up the win. Austin Clemens tossed a perfect ninth for the save, striking out two.

CU starter Mitch Langer tossed six innings, giving up two earned runs on three hits. He walked four, hit six batters and struck out six. The righthander worked around two hit batters in the second, three walks in the third and a walk and a hit batter in the fourth.

Wullenwaber (2-2) suffered the loss, allowing three runs on four hits in one inning of relief.

Clarke scored four runs in the top of the first in the doubleheader opener on three hits and the aid of two Cumberland errors, starting with a single and stolen base from Tyler Malcook. With two outs Stephan Zanoni walked and Evan Faccenda reached on an error, extending the inning.

Jacob Blunt’s RBI single put the Crusaders on the board and Gawelko followed with a two-run single. Blunt scored on the play on a throwing error for a 4-0 lead after a half inning.

Krajnak hit the first of three home runs on the day in the bottom of the inning, but Clarke came back with two more runs in the second.

Malcook walked with one out and Kevin Hunley drew a free pass with two outs. Zanoni then singled, driving in a run and Faccenda’s single plated another for a 6-1 Crusaders advantage.

In the bottom of the inning Sierra and Caleb Kellogg both singled before an RBI double from Hollis.

Cumberland got another run in the fourth when Sierra doubled with one out and came across on a two-out single by Hollis, cutting the deficit to 6-3.

The Phoenix exploded for eight runs in the fifth to take control of the contest, beginning with a leadoff single by Connolly before Mira’s two-run shot to rightcenter, his first of the year. Krajnak then tripled and scored on a wild pitch to tie the game at six.

Hector Morales followed with a single, stole second and went to third on a throwing error by the catcher. Austin Voeller walked before Sierra’s three-run homer to leftcenter for a 9-6 lead.

Bo Saunders singled with two outs and Connolly followed with his two-run homer, this one to rightcenter, extending the advantage to 11-6.

Malcook accounted for Clarke’s only other run with a solo shot with two outs in the sixth.

The homers from Hollis and Krajnak provided a 2-0 lead to start the second contest, but Faccenda hit a solo shot for the Crusaders to leadoff the second. Krajnak’s second homer made it 3-1 in the fifth, but Clarke tied the contest with two runs in the sixth.

Faccenda singled and stole second to start the frame and came across on a double by pinch-hitter Tucker Mai. The tying run scored on an error, the fourth in the two games for Cumberland.

Sierra put the Phoenix back ahead with a solo homer in the bottom of the inning, but the Crusaders weren’t done.

Cumberland and Clarke conclude their series Saturday with a doubleheader at Noon.