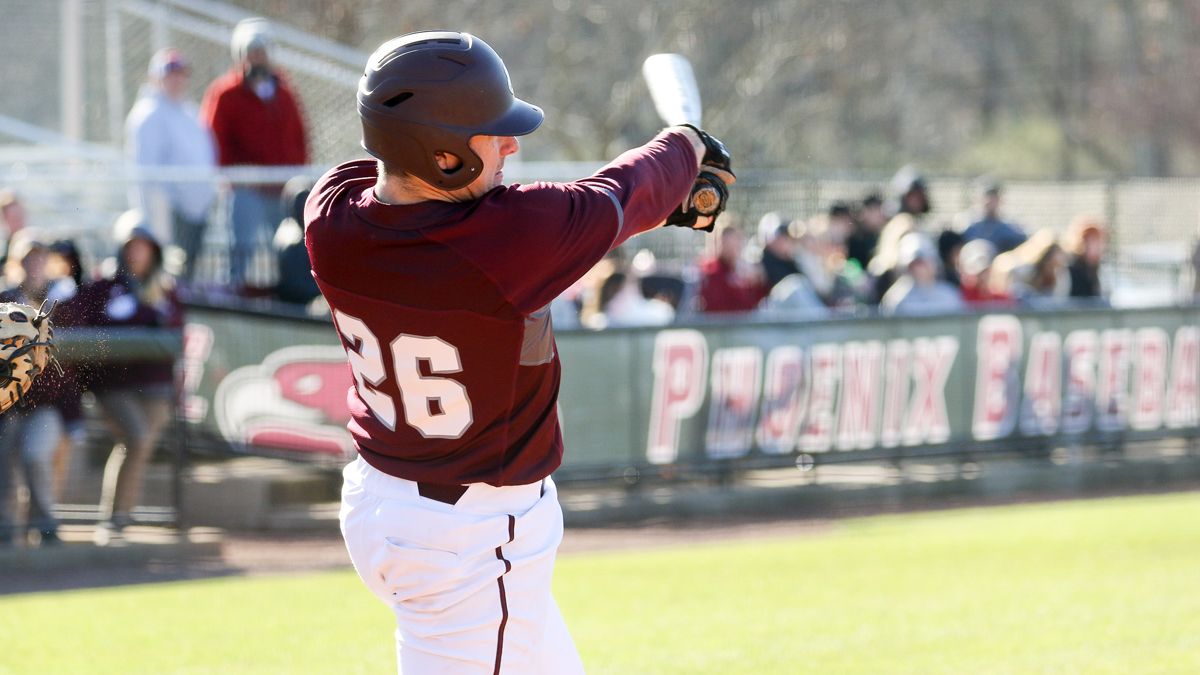 LEBANON, Tenn. – Cumberland scored three times in the fifth and sixth innings, including a pair of RBIs from Jordan Neff and Corey Meikle, salving a split of Friday’s doubleheader with an 8-3 victory over Indiana Wesleyan. The Phoenix dropped the opener, 8-5, to Lourdes University at Ernest L. Stockton Field-Woody Hunt Stadium.

Meikle plated a pair of runs with a single to leftcenter after a run-scoring base hit by Neff in a three-run fifth inning, giving Cumberland a 5-3 edge. CU added three more runs in the sixth, taking advantage of two IWU errors, with the final run coming across on a sacrifice fly by Neff.

The late runs made a winner of Travis Dohr (4-0), who retired 12 of the final 14 Wildcats batters of the contest. The righthander allowed three runs on seven hits with two walks and five strikeouts.

Lourdes plated five runs on three hits and the aid of four walks and a hit batter, scoring all five runs with two outs in the fourth inning to take control in the 8-5 victory. Cumberland loaded the bases with no outs in the seventh but got just one run via a walk.

CU starter Mitch Langer (1-2) allowed seven runs on five hits in 3.2 innings to take the loss in the opener, walking three, hitting two and striking out two. Evan Flener worked the final three innings for the Phoenix, giving up one run on two hits.

Rayden Sierra posted two of the team’s four hits and drove in two runs. Cumberland stranded nine runners in the loss, going just 1-for-13 with runners in scoring position.

Colin Gottschalk (1-0) tossed four innings to get the win for Lourdes, allowing three runs on one hit with three walks. Bill Laranga worked in-and-out of trouble in the seventh, loading the bases with no outs but giving up just one run.

Kyle Sherman drove in three runs and George Pastor had two RBIs for the Gray Wolves in the win.

The Gray Wolves scored twice in the second inning, starting when Glen Crabtree was hit and Noah Hayes walked with one out. Sherman followed with a two-run double down the leftfield line for a 2-0 lead for Lourdes.

The Phoenix responded with two runs in their half of the second when Hector Morales and Sierra were both hit to start the frame. Steven Hollis walked, loading the bases, and Kyle Allen was hit, forcing in a run. A groundout by Bo Saunders plated another run, knotting the contest at two.

Caleb Kellogg walked, stole second and moved to third on a wild pitch in the Cumberland third. He scored on Sierra’s two-out single down the leftfield line for a 3-2 CU edge, but the lead didn’t last long.

In the fourth Lourdes scored five runs on just three hits and the aid of four walks and a hit batter, netting all five runs with two outs in the inning.

Hayes singled with one out and Sherman walked before a sacrifice bunt by Derek Scott pushed the runners to second and third. Jonathan Barker singled down the rightfield line, plating both runners, and Zak Laubscher was hit. A wild pitch moved the runners to second and third and Pastor’s single to left scored two more runs, ending the day for Langer.

Cumberland reliever Justin Flores walked two batters and tossed a wild pitch, allowing the final run of the inning to come across.

The Phoenix got a run back in the fifth when Austin Krajnak singled with one out and scored on Sierra’s two-out triple to rightcenter.

Lourdes added an insurance run in the seventh, starting with a leadoff double from Childress and a single by Crabtree. Sherman’s line drive to rightcenter plated Childress for an 8-4 Gray Wolves lead.

Cumberland loaded the bases with no outs in the bottom of the seventh on walks to Kellogg and Krajnak and Morales was hit, but Sierra struck out before a free pass to Austin Voeller forced in a run.

Hollis popped out and Allen struck out to end the inning and the game, Lourdes taking an 8-5 victory.

Cumberland got on the board in the first inning against Indiana Wesleyan, with Nick Mira drawing a walk and pinch-runner Taylor Dorsey taking second on a sac bunt from Jordan Hunt. Krajnak followed with an RBI single to leftcenter for the early lead.

Brandon Shaffer and Brady West both singled and Caleb Eder walked to start the IWU third inning. With one out Grant Thompson’s sacrifice fly plated a run before a two-run double to leftcenter by Jordan Wharton put the Wildcats ahead, 3-1.

Meikle then singled to leftcenter, scoring both runners for a 5-3 CU lead.

In the sixth Krajnak reached on a throwing error by the third baseman and Sierra reached when the centerfielder misjudged a fly ball. Krajnak scored on the play and Sierra raced around to third. He came across on a wild pitch.

Morales was hit again, stole second and third and scored on the sac fly from Neff for the final run of the contest.

Cumberland plays Indiana Wesleyan at 11 a.m. and Lourdes University at 2 p.m. on Saturday to finish the weekend series against the two teams.