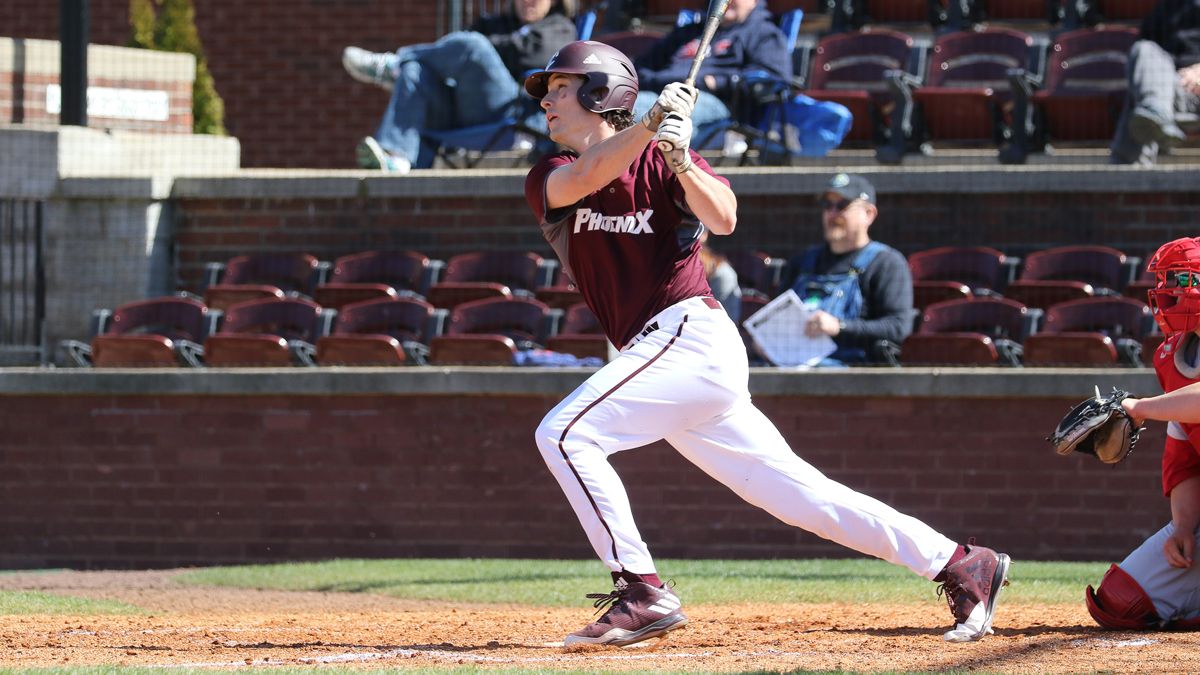 LEBANON, Tenn. – Jason Wullenwaber struck out 10 in six shutout innings and Kevin Connolly doubled and homered, driving in five runs in a 14-0 victory in the first game, but Cumberland dropped the second contest, 10-6, to St. Ambrose in a baseball doubleheader here Monday at Ernest L. Stockton Field-Woody Hunt Stadium.

Wullenwaber (4-2) tossed six shutout innings, retiring the last 14 batters he faced to pick up the victory in the opener. The righthander allowed two hits, did not walk a batter and struck out 10.

Connolly posted a bases-clearing double and a two-run homer in the win and Hector Morales added three hits, part of a 15-hit attack for the Phoenix (13-13). Nick Mira also doubled twice and scored two runs for CU.

In the second game both clubs scored three runs in the first inning but the Bees (4-10) plated runs in five of the seven innings. Greg Wymer, David Gonzalez and Andrew Barreto each drove in two runs and Tanner Ennis and Wymer scored twice apiece as well.

McCabe (2-2) worked in-and-out of trouble but got through six innings for the win. He allowed five runs on seven hits with four walks and six strikeouts. Cumberland stranded a pair of runners in the third and left the bases loaded in the fourth, missing chances to get back into the game after the Bees took the lead.

Steven Hollis put the Phoenix on the board in the first inning of the opener, drilling a hanging breaking ball over the wall in rightfield, his second of the year, for a solo shot and a 1-0 lead.

Sheley worked around an error later in the inning and retired six of seven batters before running into trouble in the fourth.

Morales led off the frame with a single to left and scored on Nick Mira’s double to deep leftcenter. Walks to Kyle Allen and Bo Saunders loaded the bases with two outs and Connolly delivered for CU, lining a double over the head of the centerfielder to clear the bases.

Hollis followed with an RBI triple down the rightfield line and Austin Krajnak doubled to leftcenter, plating another run. Morales singled home the final run of the inning, extending the Cumberland advantage to 8-0.

The Phoenix added three more runs in the fifth, starting with a leadoff double to rightcenter from Mira. He went to third on a balk and scored on a ground ball by Dajion Whitfield that was booted. Two batters later Connolly hammered a two-run homer to left about halfway up the pine trees, his second of the year, extending the lead to 11-0.

In the sixth Krajnak and Morales both singled before a run-scoring single down the leftfield line by Rayden Sierra. Whitfield then singled to left, loading the bases, and Allen plated a run with a sacrifice fly to deep leftcenter. Pinch-hitter Mitch Langer dumped an RBI single into short leftcenter later in the frame for the final run of the game.

The Bees started quickly in the second game, with Zach Hart singling up the middle to start the contest and scoring on a double to rightcenter by Ennis. Wymer then walked and both runners moved up on a groundout before a two-run single to center by Gonzalez gave St. Ambrose a 3-0 lead after a half inning.

Cumberland answered with three runs of its own in the bottom of the inning when Connolly singled to right and stole second. Hollis doubled down the rightfield line to score a run and two batters later, Morales drilled a hanging curve ball over the wall in leftcenter, his third of the year, knotting the contest at three.

In the SAU third Ennis led off with a single to right and Wymer reached on a ground ball to deep short that was bobbled. A ground ball moved the runners to second and third and Barreto’s two-out, two-run single to center put the Bees ahead, 5-3.

St. Ambrose added two more runs in the fourth when Oli Herrera drew a leadoff walk and Matt Baldwin followed with an RBI double down the rightfield line, chasing Smith from the contest. With two outs Wymer doubled to rightcenter, driving in another run, extending the lead to 7-3.

Cumberland got a run back in the fifth after Krajnak reached on a throwing error. The ball went out of play, moving the runner to second, and he went to third on a passed ball. Sierra’s single to left scored Krajnak, but that was all for the Phoenix.

St. Ambrose plated a run in the sixth when Herrera singled to leadoff and Baldwin doubled to right, putting runners on second and third. With one out Wymer’s sac fly to deep rightcenter made it an 8-4 SAU advantage.

Connolly tripled to centerfield with two outs in the bottom of the sixth and Hollis walked. Krajnak’s ground ball went under the glove of the third baseman, allowing Connolly to score, but Hollis was thrown out trying to take third on the play.

Gonzalez walked and Barreto doubled to start the seventh for the Bees and a walk to Zach Kaminski loaded the bases. Herrera flied out down the rightfield line, but Caleb Kellogg’s throw to the plate sailed well over the catcher’s head, allowing a run to score. Later in the inning another run came across on a pickoff throw to second from the catcher.

Sierra accounted for the final run of the game with a solo homer to rightcenter in the bottom of the seventh, his fourth of the year.

Cumberland hosts Talladega College for a doubleheader Tuesday at 1 p.m. before taking on Georgetown College in a three-game series at home this weekend beginning Friday.