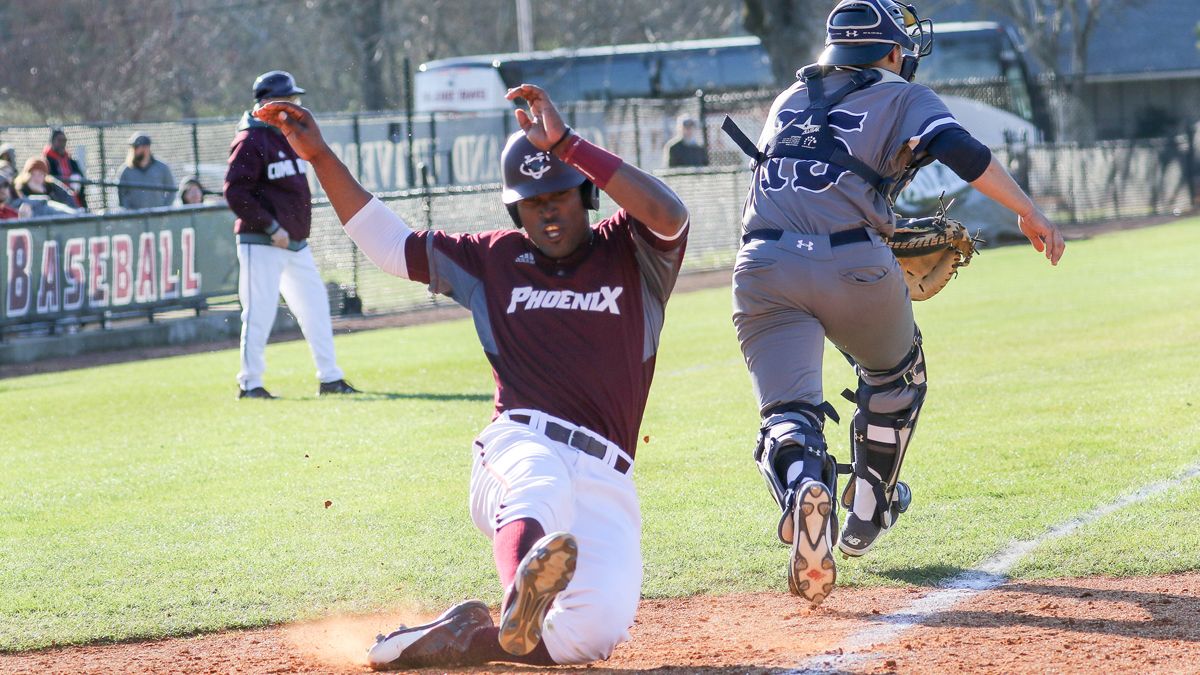 LEBANON, Tenn. – Jackson White earned his first collegiate victory with a complete game and Rayden Sierra collected two hits and three RBIs, helping Cumberland earn a split of a doubleheader with a 4-3 victory over Talladega College in the second game of Tuesday’s doubleheader after the Tornadoes won the opener, 5-2, at Ernest L. Stockton Field-Woody Hunt Stadium.

White (1-0), making his first appearance since April 8, 2015, worked around four errors and three walks, allowing one earned run and just four hits in seven innings. Talladega plated a run with two errors and a walk in the first inning and Emilio Martinez’s solo homer in the third put the Tornadoes ahead, 2-0.

The lefthander induced a pair of doubleplays, including one in the sixth inning with the bases loaded and nobody out. A run scored on the play to pull Talladega within a run, but the twin-killing reduced the damage. White got one big assist from his defense, with Steven Hollis running 45-50 yards to track down a Martinez line drive to end the game with the tying run on first.

Sierra’s two-run single in the third gave Cumberland (14-14) the lead and an RBI single in the fifth provided the insurance run needed for the victory. Hector Morales added two hits and an RBI as well for the Phoenix in the win.

Martinez and Ryan Ramirez each collected two hits and four different players drove in runs for the Tornadoes (18-10) in the opener. Kyle Chavez (3-2) tossed five shutout innings for the win on the mound, giving up just two hits and three total baserunners with four strikeouts.

CU starter Sam Eichler (1-1) suffered the loss, giving up three runs on four hits in 3.1 innings. The lefthander walked three and did not strikeout a batter. Jordan Hunt posted two of the team’s four hits and Austin Krajnak hit a two-run homer, his ninth of the year, for Cumberland.

The Tornadoes broke through with three runs in the fourth inning in the opener, starting with a leadoff walk to Gustavo Castellanos, who stole second and scored on a double down the rightfield line by Hamlet Flores. Ramirez then singled to right, putting runners on the corners, and Talladega pulled off the double steal to plate the second run.

A bunt by Anthony Rodriguez pushed the runner to third and he scored on a groundout by Jorge Rodriguez.

The Tornadoes threatened again in the fifth with walks to Flores and Ramirez, but an inning-ending doubleplay with a strikeout and caught stealing helped Cumberland keep the deficit at three.

Hunt tripled off the wall in leftfield in the bottom of the fifth, the first runner to reach third in the game for the Phoenix, but Chavez got a pop-up and a chopper back to the mound to keep his shutout intact.

In the sixth Wilkin Louis walked with two outs and scored on a double to rightcenter by Martinez. Cameron Davis then singled to right and Martinez came across, just ahead of the tag, extending the Talladega advantage to 5-0.

Cumberland got on the board in the bottom of the frame when Hollis walked against reliever Manuel Caballero and Krajnak followed with a mammoth drive over the wall in leftcenter, clearing the pine tree in the air. He just missed a homer earlier in the game on a drive to deep leftcenter, but the north wind knocked down the high drive.

Sierra walked and Nick Mira singled later in the inning, but Hunt flew out to end the threat.

Talladega leadoff hitter Jesus Zapata reached on a throwing error by Krajnak to begin the second game. He went to second on the play and after a walk to Louis, moved to third on a groundout. With two outs a ground ball up the middle by Castellanos was also booted, allowing the run to score.

Martinez’s high drive over the wall in left with two outs in the third, his third home run of the year, put the Tornadoes ahead, 2-0.

Walks to Kyle Allen and Krajnak preceded a two-out RBI single to center by Morales in the bottom of the inning. Krajnak took third on the single and Morales went to second on a wild pitch. Sierra’s ground ball through the middle plated two runs for a 3-2 CU advantage.

In the fifth Hollis walked and Krajnak doubled down the leftfield line, but Morales struck out with a drawn-in infield. Sierra delivered a two-out single to left, scoring a run, but Krajnak was thrown out trying to score as well.