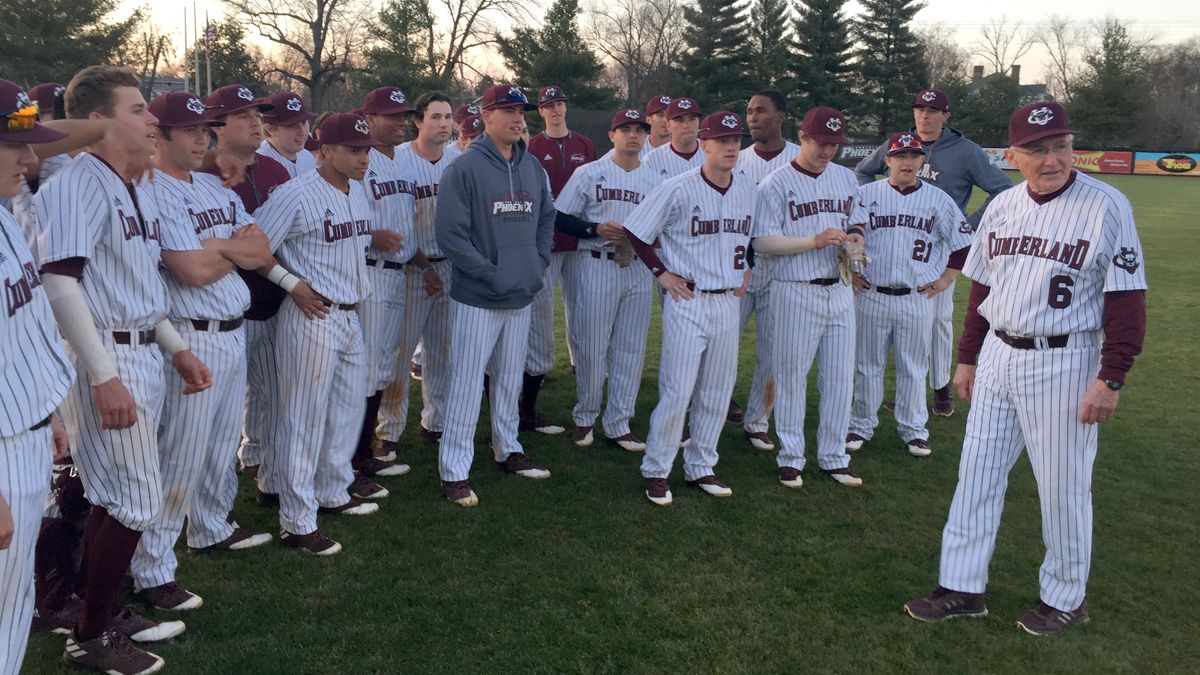 LEBANON, Tenn. – Austin Krajnak’s two-run homer in the eighth provided the winning margin in the opener and Austin Voeller’s three-run shot in the seventh tied the second contest and his two-run single in the eighth won it, as Cumberland swept a doubleheader from Georgetown College, 7-5 and 12-11, in baseball action here Sunday at Ernest L. Stockton Field-Woody Hunt Stadium.

Krajnak’s two-out, two-run homer in the bottom of the eighth provided the winning runs in a back-and-forth first game and Hector Morales followed with a solo homer for insurance in the 7-5 victory.

Steven Hollis’ grand slam got Cumberland back into the second contest and Voeller’s three-run blast in the bottom of the seventh tied the game at nine. Rodnee Little’s two-run single in the eighth put Georgetown (17-8, 3-3 Mid-South) back ahead, but a runs scored on a passed ball before Voeller’s jam shot to left plated the tying and winning runs in the bottom of the inning for the win.

Voeller finished the game 5-for-5 with five RBIs and two runs scored after entering the contest with six total hits for the year. Three of the five hits were to the opposite field, but the three-run homer was a mammoth blast over the trees in rightcenter, a no-doubter to knot the game at nine.

Jackson White (2-0) picked up the win for CU with one shutout inning of relief, while Steven Whisler (0-2) suffered the loss for the Tigers, allowed three runs on two hits in two-thirds of an inning.

Rayden Sierra put CU ahead with a two-run double in the first inning of the first game and Dajion Whitfield’s RBI double in the fourth made it 3-0, but the Tigers scored three times in the fifth to tie the contest. Kendall King’s solo homer in the top of the eighth gave Georgetown its first lead, but Krajnak’s drive put the Phoenix back ahead.

Kevin Connolly finished with three hits and scored twice in the win for Cumberland and Krajnak and Sierra each posted two hits and two RBIs.

Georgetown starter Michael Conrad battled for seven innings for the Tigers, allowing four runs on 10 hits. The lefthander walked four and struck out 11, stranding 10 Cumberland baserunners. Michael Koltak (2-1) took the loss, giving up the two home runs in the eighth.

Cumberland plated a pair of runs in the opener to take an early lead after a leadoff single from Connolly and a one-out walk to rajnak. A groundout pushed the runners to second and third before Sierra delivered a two-run double to leftcenter.

Doubles from Janson Neff and Whitfield in the fourth extended the lead to 3-0.

The Tigers tied the game in the fifth with four hits and a walk, including a double from King and a free pass to Brandon Benson to start the frame. Sam Williams put down a beautiful sacrifice bunt down the third base line that turned into a base hit, loading the bases.

Sam Medina flied out to right, plating a run, but Hoppe struck out John Shattles for the second out. Gaimbalvo singled to short rightcenter, just in front of a diving Whitfield, scoring a run, and Ryan Garner followed with an RBI single to center, knotting the contest at three.

Kyle Allen led off the Cumberland sixth with a double over the head of rightfielder Benson, but Conrad struck out Whitfield and Jordan Hunt. Connolly fought off a 2-2 breaking ball and served it down the rightfield line, scoring pinch-runner Corbin Meikle for a 4-3 CU edge.

The lead didn’t last long, though, with Medina reaching on a throwing error to begin the Georgetown seventh. He stole second and scored on Giambalvo’s double off the rightfield line, which missed being a home run by about two feet.

King’s line drive off the net in front of the scoreboard in left field to start the eighth inning put the Tigers ahead for the first time in the game, 5-4.

Connolly walked with one out in the eighth and Krajnak’s monster drive to deep left, his 11th home run of the year, put Cumberland ahead. Morales followed with a line drive over the scoreboard, his fourth of the year, extending the lead to 7-5 and evening the series at one game apiece.

Georgetown struck for five runs in the second inning of the second contest, taking advantage of an error by the Phoenix.

Kyle Jackson led off with a single in the hole between third and short and Andrew Paz grounded to third with one out, but Krajnak’s throw to second sailed into rightfield, putting runners on the corners. Diego Perez’s drag bunt single was perfect, in the triangle between the pitcher, first and second baseman, scoring a run, and Williams laced an RBI double the leftfield line.

Medina struck out swinging, but the ball bounced away from the catcher, allowing him to reach and load the bases. Giambalvo drove home two runs with a single to leftcenter and Rodnee Little’s groundout scored another for a 5-0 Tigers advantage.

Cumberland got run back in the bottom of the inning with a single by Voeller and a double from Meikle. Connolly’s sacrifice fly pushed a run across, but Meikle was stranded at third.

Williams led off the Georgetown fourth with a walk and Medina’s line drive to left was misplayed into a two-base error. Two batters later Little ripped a pitch off his shoetops into the trees in left for a three-run homer, his first of the year, ending the day for CU starter Jason Wullenwaber.

Cumberland got back into the game quickly in the fifth after a walk to Krajnak and singles by Morales and Sierra. Hollis lined a grand slam over the wall in right, his third home run of the year and the first grand slam by a Phoenix player since Timothy Smith on March 1, 2015, against Indiana-Southeast.

The Tigers added an insurance run in the top of the seventh when Granados was hit and scored on a two-out, pinch-hit triple to rightcenter by Shattles, giving Georgetown a 9-6 lead.

The hit batter helped Cumberland in the bottom of the inning after Morales was hit to leadoff and Sierra grounded a single through the left side. With one out Voeller ripped a 2-1 pitch over the trees in rightcenter, his second home run of the season, knotting the game at nine.

In the eighth Medina walked and Giambalvo doubled before a two-run single by Little plated both runners, knocking Langer from the game. The righthander threw in all three games in the series, allowing three runs on four hits in 3.2 innings in the second contest.

Connolly and Nick Mira both singled to start the bottom of the inning and Krajnak’s groundout moved the runners to second and third. Morales struck out, as did Sierra, but strike three to Sierra went off the glove of Paz and all the way to the backstop.

Connolly scored on the play and Sierra reached first. Hollis then walked, setting up Voeller’s game-winning single to left, with Sierra sliding in ahead of the throw from Perez to end the almost three-hour contest.

Wullenwaber allowed eight runs, five earned, on eight hits in 3.1 innings. He was hurt by a pair of Cumberland errors but made mistakes ahead in the count to several hitters, including the three-run homer from Little that chased him from the game.

Georgetown starter Kyle Fieger pitched in-and-out of trouble in 4.1 innings, surviving until giving up the grand slam to Hollis. He allowed six runs on 10 hits with four strikeouts.

Cumberland plays Brescia University at home on Tuesday at 2 p.m. before heading to Freed-Hardeman on Wednesday and Lindsey Wilson for a three-game series next weekend.