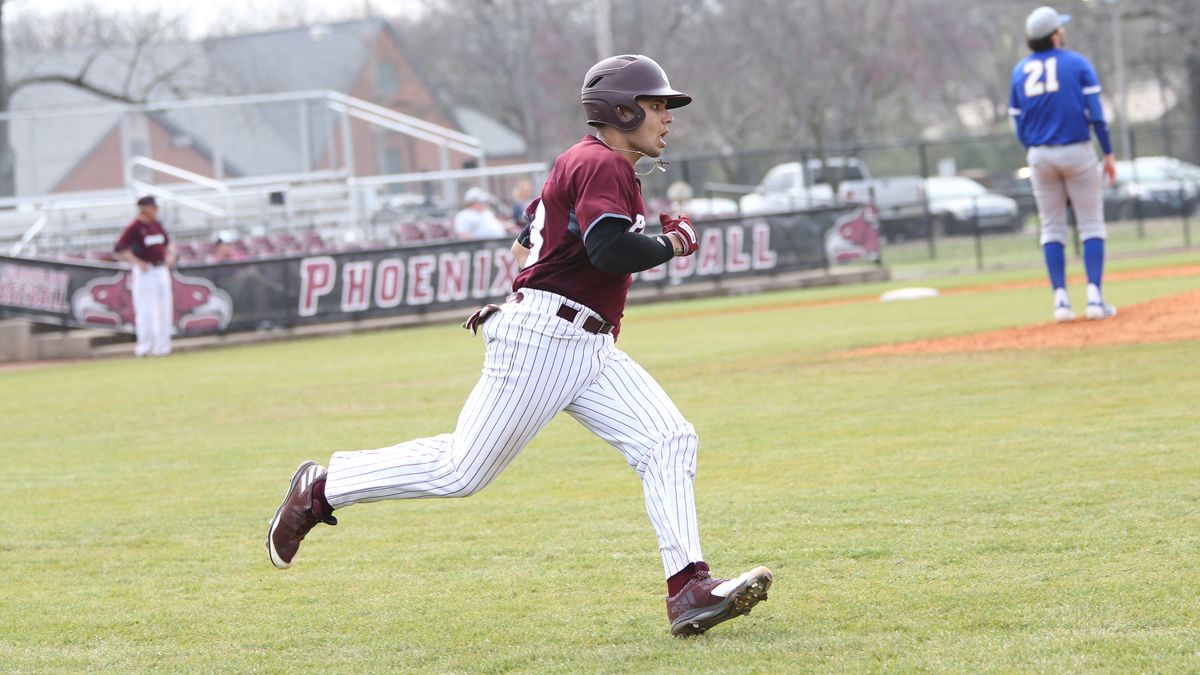 LEBANON, Tenn. – Jayden Jackson’s three-run homer in the fifth helped Lindsey Wilson overcome an early deficit in a 6-4 victory in the opener and Steven Paredes drove in four runs in an 8-1 LWC win in the second game, helping the Blue Raiders complete a three-game sweep over Cumberland on Friday at Egnew Park in Columbia, Ky.

Cumberland led 3-1 and 4-2 early in the opener, but Jackson’s second home run of the series erased the deficit in a 6-4 Lindsey Wilson victory.

Louis Corral (2-0) intentionally walked Caleb Kellogg in the fifth when he entered the game in relief of LWC starter Aaron Pearcy, but the junior righthander retired 14 of the final 15 batters he faced, giving up just a single to Austin Voeller in the seventh. He tossed 4.2 shutout innings of relief for the victory.

Cumberland (16-19, 3-6 Mid-South) starter Curtis Hoppe (1-5) suffered the loss, allowing five runs on five hits in five innings of work. He walked three and struck out two, with Jackson’s blast essentially the day for the righthander.

Lindsey Wilson (18-13, 5-1) scored twice in the first and second innings and four more times in the third to take control of the second game early. Paredes was 3-for-4 with four RBIs and a run scored for the Blue Raiders, backing up Ricky Winfield (4-5), who allowed one run on five hits in six innings. He walked two and struck out eight.

The Phoenix got a run in the first to take an early lead when Rayden Sierra doubled down the leftfield line with one out and moved to third on a passed ball. After a walk to Austin Krajnak, Morales singled to right, plating Sierra.

The Blue Raiders got the run back in the second after walks to Jackson and Jan Carlos Ortiz to start the frame. Conner Anderson grounded into a 1-6-3 doubleplay, but pinch-runner Ben Heideman scored on a wild pitch.

In the third Krajnak and Morales both singled with one out and Voeller followed with a two-run double down the rightfield line, giving CU a 3-1 edge.

Ben Giland’s solo homer to left with two outs in the bottom of the third made it a one-run game.

Cumberland added another run in the fourth when Kyle Allen singled to leadoff and pinch-runner Taylor Dorsey went to second on a sacrifice bunt by Steven Hollis. Kevin Connolly then doubled down the leftfield line for a 4-2 Phoenix advantage.

The trouble started in the fifth with two outs for Lindsey Wilson when Ray Gonzalez singled and Giland was hit. Jackson then drilled his second homer of the weekend, putting the Blue Raiders ahead, 5-4.

LWC added an insurance run in the sixth. Antonio Dorado singled with one out and Vincent Boils walked before Lawyer Bruan’s RBI single up the middle. Corral did the rest, shutting down the Cumberland offense to pick up the victory.

Steven Paredes led off the second game with a solo homer to left, but the Blue Raiders weren’t done in the opening inning. Guadarrama then singled, went to second on a wild pitch and scored on Jackson’s sacrifice fly.

In the second Dorado started the frame with a single and moved to second on a wild pitch. He took third on a groundout and came across on a two-out single from Braun, who stole second. Paredes then singled up the middle, driving home Braun for a 4-0 LWC lead.

Lindsey Wilson blew open the game with four more runs in the third, starting when Giland reached on an error. Jackson singled and Ortiz moved the runners with a sacrifice bunt. Dorado’s sac fly plated a run and Mersinger reached on an error, loading the bases.

Wise plated a run with a sacrifice fly and a two-run single on the right side by Paredes gave LWC an 8-0 advantage.

Cumberland got on the board in the fourth when Morales tripled and Voeller walked. Morales later scored on a wild pitch, but that was all for the Phoenix.

Cumberland heads to Martin Methodist on Tuesday for a single game at 4 p.m. and starts a nine-game homestand next weekend against the University of the Cumberlands.