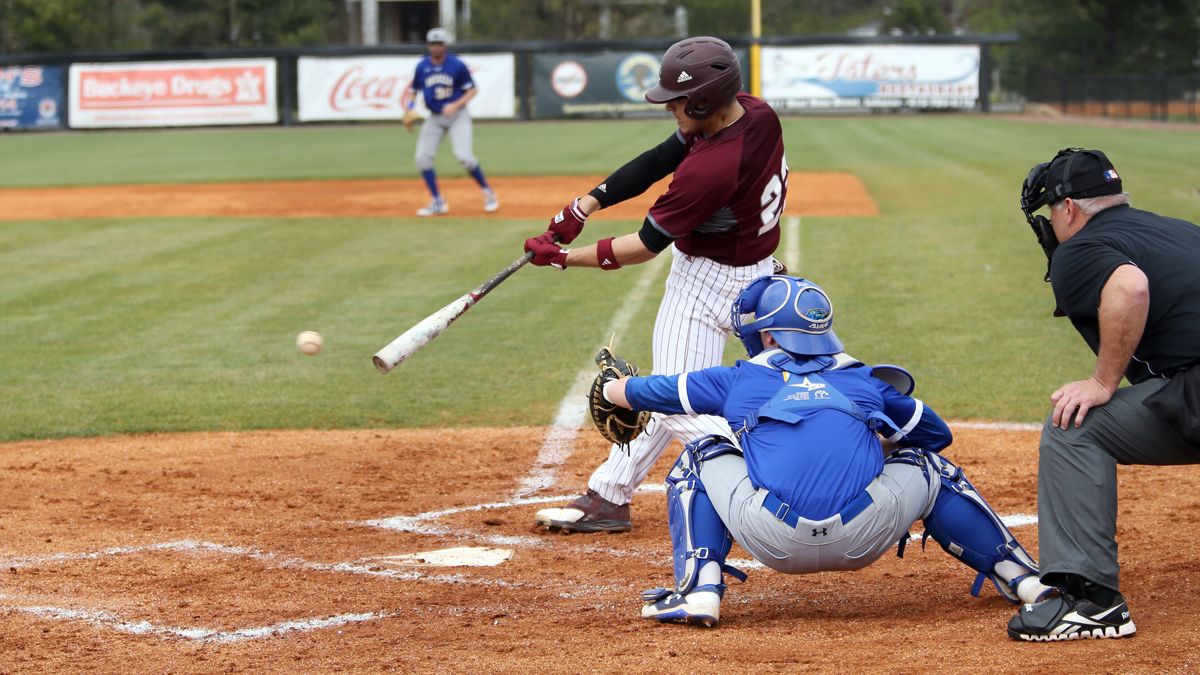 LEBANON, Tenn. – Trevor Bradley’s three-run double in the eighth tied the game and Brady Shoppe’s bases-clearing double in the ninth put Georgia Gwinnett ahead for good in a 9-6 victory over Cumberland in baseball action here Saturday at Ernest L. Stockton Field-Woody Hunt Stadium.

The Phoenix (18-24) led 6-3 thanks to a two-run single by Nick Mira and a run-scoring groundout from Steven Hollis in the seventh. Austin Voeller’s third homer of the year got Cumberland on the board in the fifth and Bo Saunders drove in a run with a double later in the frame. Hollis’ double to rightcenter in the sixth tied the game at three.

In the eighth Marcus McCorkle and Brady Shoppe each walked with one out and Brady Hamilton singled, loading the bases, but CU starter Jason Wullenwaber struck out Angel Soto. Bradley’s soft line drive down the leftfield line caromed off a diving Kevin Connolly down the leftfield line. The ball bounced well into foul territory, allowing all three runners to come around.

Pinch-hitter Rodney Tennie beat out an infield single to start the ninth and Austin Alexander singled to left with one out. Tennie was nearly thrown out trying to take third on the play but was called safe. McCorkle was hit, loading the bases, and Shoppe’s bases-clearing double gave the Grizzlies (28-14) a 9-6 lead.

That made a winner of Gwinnett reliever Michael Mayuski (3-0), who pitched the final two innings, allowing no runs on three hits with two strikeouts. GGC starter Tyler Souris lasted six innings, giving up three runs on seven hits. He walked two and struck out four.

Wullenwaber tossed eight innings, scattering nine hits. The righthander allowed six runs, four earned, with seven walks and four strikeouts. He induced a pair of doubleplays, working around baserunners in every inning but the first and stranding two in the third, fourth and sixth innings.

Alexander, Shoppe, Hamilton, Soto and Bradley each finished with two hits for the Grizzlies and Bradley drove in five runs, including a two-run single in the fourth. McCorkle scored three times and Alexander, Tennie and Hamilton each plated two runs for GGC.

Voeller finished 3-for-4 and Kevin Connolly, Rayden Sierra and Mira each collected two hits, but the Phoenix stranded 11 baserunners in the loss, including two each in the sixth, seventh and eighth innings.

Alexander’s missile high over the rightfield wall got the Grizzlies on the board in the second, his second home run of the year.

Gwinnett added two runs in the fourth when McCorkle reached on an error by rightfielder Dajion Whitfield with one out and Hamilton singled through the left side with two outs. Soto walked, loading the bases, and Bradley’s chopper up the middle made it into centerfield, scoring a pair of runs for a 3-0 GGC lead.

Voeller got the Phoenix on the board with a solo homer to leftcenter to leadoff the sixth, his third of the year. Whitfield then reached on an error and pinch-runner Hollis moved to second on a wild pitch. Saunders singled to left with one out, plating Hollis to cut the deficit to 3-2.

In the sixth Mira singled to right with two outs and Voeller followed with a single through the right side. Hollis then doubled to rightcenter, scoring a run and knotting the contest at three.

Connolly and Hector Morales both walked to start the seventh on eight straight balls by GGC reliever Stone Kelly before Sierra squibbed a single past a drawn-in first baseman into rightfield, loading the bases. With one out Mira blooped a single down the rightfield line, right off the end of the bat, plating a pair of runs.

Voeller followed with another free pass, loading the bases again, and a slow roller to second by Hollis pushed across Sierra for a 6-3 CU advantage, but the Grizzlies erased the deficit in the next half inning and scored the winning runs in the ninth.

Cumberland hosts Martin Methodist on Tuesday before hitting the road next weekend for a three-game series at the University of Pikeville.