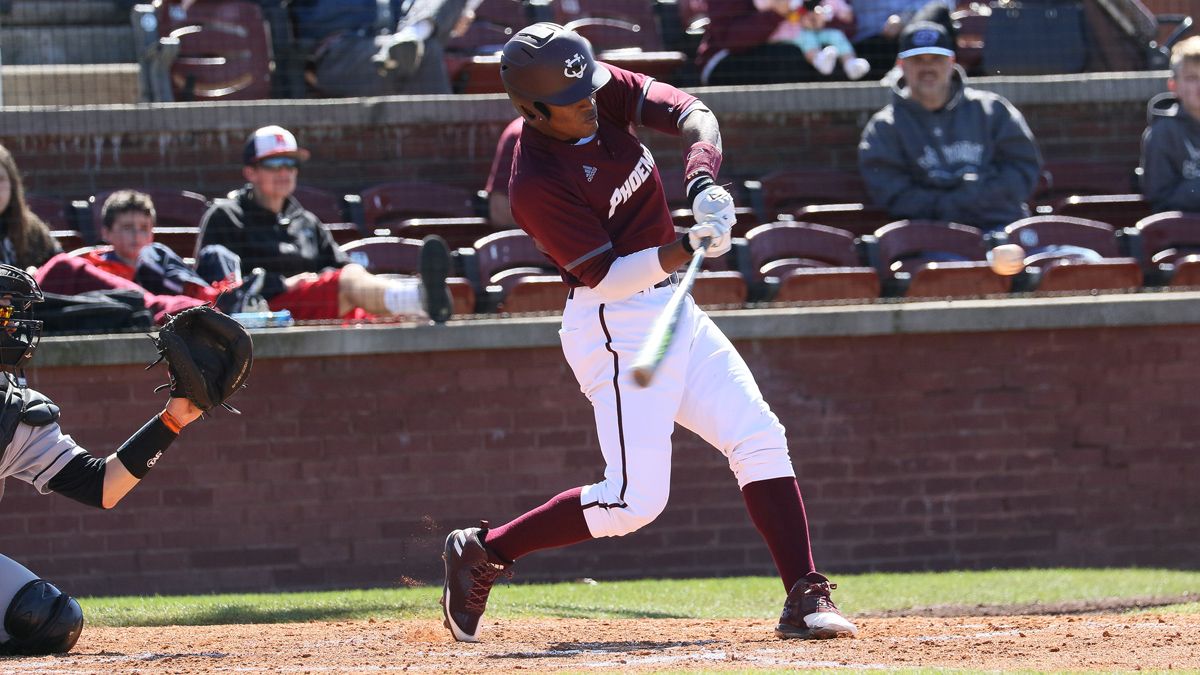 Sierra belted a three-run homer in the first, a two-run shot in the sixth and a solo home run in the eighth, giving the junior 10 homers and 40 RBIs for the season. Austin Krajnak added a two-run shot, his team-leading 15th of the year, and Austin Voeller posted a solo homer, his second straight game with a round-tripper.

Cumberland (19-24) scored four runs in the first and three more in the second for an early lead, but the Grizzlies answered with a pair of runs in both the third and fifth innings along with a single run in the sixth to pull within 7-5. Sierra’s two-run homer and Jordan Hunt’s run-scoring triple gave the Phoenix some breathing room and Sierra added some insurance with his solo shot in the eighth.

Dohr (6-4) worked around four Cumberland errors, giving up six runs, three earned, on eight hits in 6.1 innings. He walked five, struck out four and stranded eight GGC baserunners while in the contest. Cody Campbell got the final eight outs for CU, allowing one run on three hits with one strikeout.

Alex Garland was 3-for-4 with a homer, three RBIs and two runs scored for the Grizzlies, while Marcus McCorkle added two hits with a solo homer and scored twice. GGC left 12 runners on base in the loss.

Cumberland started the game with a single from Kevin Connolly and Morales was hit before Sierra’s three-run shot to rightcenter. Krajnak and Voeller both walked and Hunt doubled down the leftfield line, plating Krajnak for a 4-0 lead after an inning.

Morales led off the second with a double and two batters later, Krajnak drilled a two-run homer down the leftfield line. Two batters later Voeller drilled his solo shot to rightcenter, making it 7-0 for the Phoenix.

The Grizzlies inched their way back into the contest, starting in the third with a leadoff solo homer by McCorkle. Austin Alexander then reached on an error and Jean Figueroa and Brady Hamilton both walked, loading the bases. Garland’s sacrifice fly plated a run, but Dohr wiggled off the hook with a strikeout and a groundout.

Figueroa reached on an error to start the fifth for GGC and two batters later Garland hit a two-run homer to left, pulling Gwinnett within 7-4.

Another error helped the Grizzlies in the sixth after a single by Brandon Frazier and a sacrifice bunt from Trevor Bradley. McCorkle then singled and Alexander was intentionally walked, but Frazier scored on a failed pickoff attempt by the Phoenix. A pair of groundouts helped Cumberland escape further damage clinging to a 7-5 lead.

Morales beat out a bunt single to leadoff the bottom of the inning and Sierra followed with a two-run homer to center. Nick Mira singled with one out and Hunt tripled with two outs in the inning against GGC reliever Tanner Shelton, scoring pinch-runner Taylor Dorsey and extending the CU advantage to 10-5.

In the seventh Garland doubled and he scored on a two-out single to left by Frazier. Gwinnett added another run in the eighth when McCorkle walked and went to second on a balk. He came across on a double to rightcenter by Figueroa, but again Cumberland got out of the inning with a pair of groundouts.

Sierra added his third homer of the game to leadoff the bottom of the eighth.

Cumberland hosts Martin Methodist on Tuesday at 2 p.m. to end an eight-game homestand before traveling next weekend to the University of Pikeville for a three-game series against the Bears.