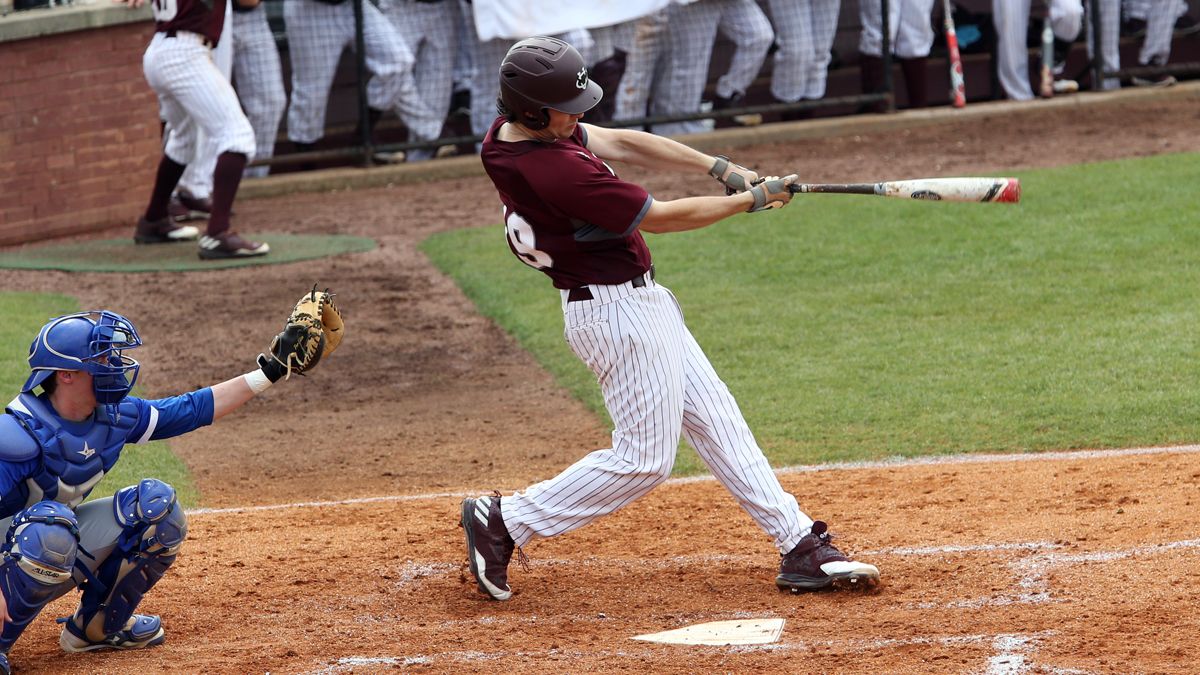 LEBANON, Tenn. – Kevin Connolly posted three hits and four RBIs and Bo Saunders drove in three runs, but 20th-ranked Bryan College scored in every inning and Trevor Behrent and Lake Burris each collected three RBIs in an 11-9 Lions victory over Cumberland in a game shortened to six innings because of rain on Tuesday at Ernest L. Stockton Field-Woody Hunt Stadium.

Two batters came to the plate for Bryan (31-13) in the top of the seventh before the field was cleared because of lightning in the area and then rain. The tarp was pulled and the teams were within five minutes of resuming action before a large clap of thunder followed by lightning halted the restarting process and the game was called.

Burris hit a three-run homer in a five-run fourth innings for the Lions and Behrent posted an RBI double and a two-run single in the first four frames, giving Bryan an 8-1 lead.

Cumberland (23-25) clawed back into the contest and had chances to take the lead, plating three runs in the fourth on a two-run double by Saunders and a run-scoring two-bagger from Connolly. A walk to Saunders forced in a run before Connolly cleared the bases with his second double of the game in the fifth, pulling CU within 9-8.

Bryan added two runs in the sixth, but the Phoenix loaded the bases with no outs and plated a run with an infield single by Austin Voeller, but Caleb Kellogg struck out and Steven Hollis lined sharply into a doubleplay to end the threat without further damage.

The lightning delay and rains came in the next half inning, ending the contest.

Bryan starter Austin Parrish (2-3) picked up the win, tossing two shutout innings while allowing one hit with one walk and one strikeout. Tristan Legault and Zane Glass each worked two innings of relief as well for the Lions.

Justin Morhardt started the game with a line drive homer to deep rightcenter, his ninth of the year, for a quick 1-0 lead for the Lions.

In the second Kila Zuttermeister and Brookes Jones led off with singles, putting runners on the corners, but Jones was thrown out trying to steal second. With two outs Tyler Scott singled to center, plating Zuttermeister for a 2-0 Bryan edge.

The visitors added another run in the third when Wade Weinburger reached on an error to start the frame and Behrent followed with an RBI double to leftcenter.

The Phoenix finally got on the board in the bottom of the third after a one-out infield single by Saunders. Connolly then singled and so did Hector Morales, but the batted ball hit Saunders for the second out. Rayden Sierra’s single to center plated Connolly, but that was all for CU.

In the fourth reliever Jackson White got the first two outs before Scott doubled down the leftfield line and Morhardt was intentionally walked. Weinburger walked, loading the bases, and Behrent’s single up the middle plated a pair. Burris followed with a three-run homer to left that just cleared the wall, his 15th of the year, giving Bryan an 8-1 advantage.

Nick Mira walked and Voeller singled to start the bottom of the fourth for the Phoenix and a one-out walk to Hollis loaded the bases. Saunders grounded a double just inside the third base bag, scoring a pair, and Connolly blooped a double down the rightfield line, plating another.

The Lions netted a single run in the fifth when Jones doubled down the rightfield line with one out and Rita followed with a two-bagger down the leftfield line, extending the lead to 9-4.

Krajnak walked to leadoff the bottom of the frame for CU and Mira was hit before a two-out free pass to Hollis loaded the bases. Glass also issued a walk to Saunders, forcing in a run, before Connolly ripped a double down the leftfield line, clearing the bases and pulling Cumberland within a run.

Behrent walked to start the sixth for Bryan and went to second on an errant pickoff throw. With one out Fernando Garcia doubled to rightcenter, plating a run, and Zuttermeister walked. Mikey Rita’s chopper over the third baseman Krajnak into leftfield with two outs scored Garcia for an 11-8 Lions edge.

Cumberland loaded the bases in the bottom of the inning with singled from Sierra, Krajnak and Mira before the infield single by Voeller, a ball that Glass dove for but couldn’t get up in time to make a good throw to the plate and he had no play at first because of a drawn-in infield. The Phoenix were not able to finish off the rally in that inning and the lightning and rain came minutes later to halt and eventually end the contest.