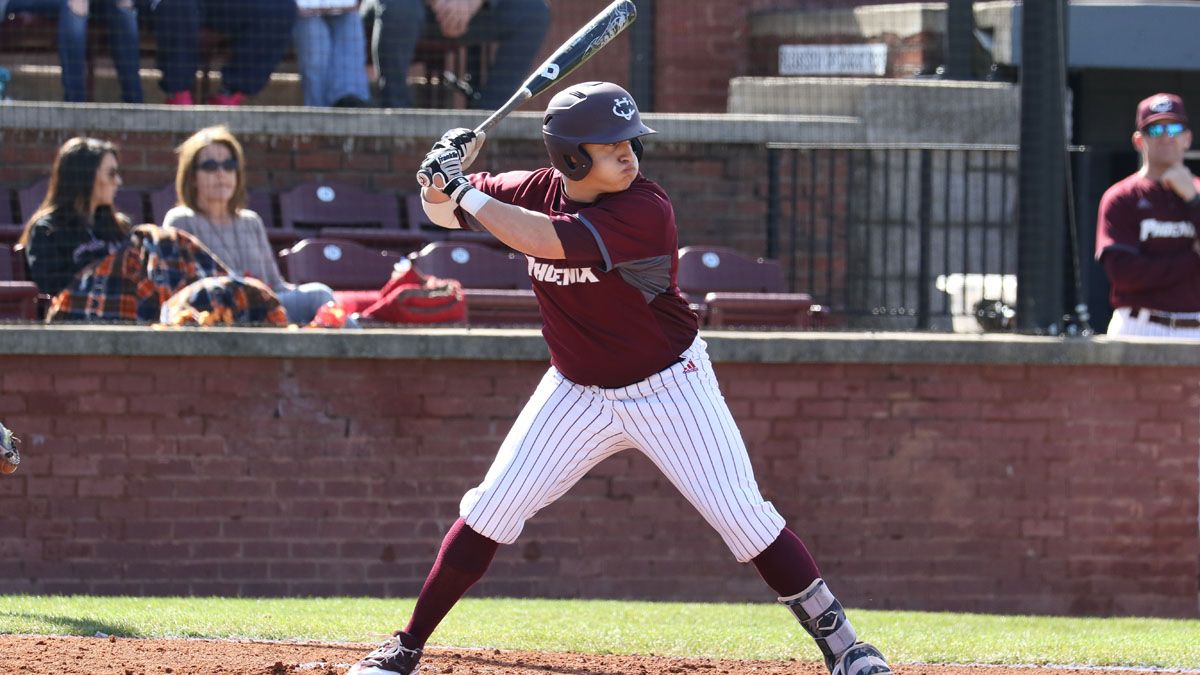 Carlos Moseley posted three hits with a pair of doubles and a run scored in CU's 9-4 loss Sunday to Pikeville. (Credit Bob Tamboli)
Univ. of Pikeville at Cumberland Univ. | March 18, 2018

LEBANON, Tenn. – Jacob Alvarado and Jay Vincent each collected three hits, backing up 6.2 innings of solid pitching from Aaron Hedgecock and leading the University of Pikeville to a 9-4 victory over Cumberland in baseball action Sunday at Ernest L. Stockton Field-Woody Hunt Stadium.

The Bears salvaged the final game of the series after Cumberland (18-8, 2-1 Mid-South) won a doubleheader Saturday to open league play. Alvarado and Jorge Perez each drove in two runs and Pikeville pounded out 14 hits in the contest, plating nine runs but stranding 13 baserunners.

Carlos Moseley and Mykel Gordon each recorded three hits and Gordon added two RBIs for the Phoenix, who collected 13 hits as a team but left 11 runners on base, going just 5-for-14 with runners in scoring position in the contest.

Hedgecock (2-0) scattered 10 hits, giving up three runs with two walks and two strikeouts. He retired eight straight after two first-inning singles, stranded the bases loaded in the fifth as well as two runners in the first and seventh innings.

Pikeville (15-11, 1-2) struck first with a pair of runs in the third, with the rally starting after a two-out single by Alvarado. Alec Barba reached on a throwing error by CU third baseman Gordon, putting runners on the second and third, and Alvarado came across on a wild pitch.

The Phoenix cut the deficit in half in the fourth with a leadoff double by Rayden Sierra, who scored on a single from Gordon.

Alvarado started the UPike fifth with a double and Barba beat out a bunt single, putting runners on the corners. Muniz’s sacrifice fly to center pushed Alvarado across for a 3-1 Bears advantage.

Perez and Luke Lubiniecki both walked to begin the Pikeville sixth and the runners moved to second and third on a wild pitch. Dohr got a pair of groundouts against a drawn-in infield but Alvarado delivered a two-out, two-run single up the middle, extending the UPike lead to 5-1.

Gordon doubled to leadoff the bottom of the inning and Jared Schmidt singled with one out, putting runners on the corners. Kyle Blackwell’s single through the right side scored Gordon, but Hedgecock got out of the inning without further damage thanks to a pair of groundouts.

Pikeville broke the game open with four runs in the seventh against the CU bullpen, starting with a one-out single by Peterson and an RBI double from Vincent. Perez then delivered a two-run homer for an 8-2 UPike advantage.

Lubiniecki was hit and Travis Haen singled before an RBI single by Luke Hartlage made it 9-2 for the Bears.

Moseley doubled with one out in the bottom of the frame and Gordon’s two-out single plated a run. Cumberland got another run with a solo homer to leftcenter in the eighth.

The Phoenix loaded the bases in the ninth with another Moseley two-bagger. Gordon was hit with two outs and Nick Mira followed with a single, but Pikeville’s Brandon Sewell came in to get a popout by Schmidt to end the contest, earning a save.

Cumberland does not play again until next weekend at Kentucky in a three-game series beginning Friday at 1 p.m. CT.