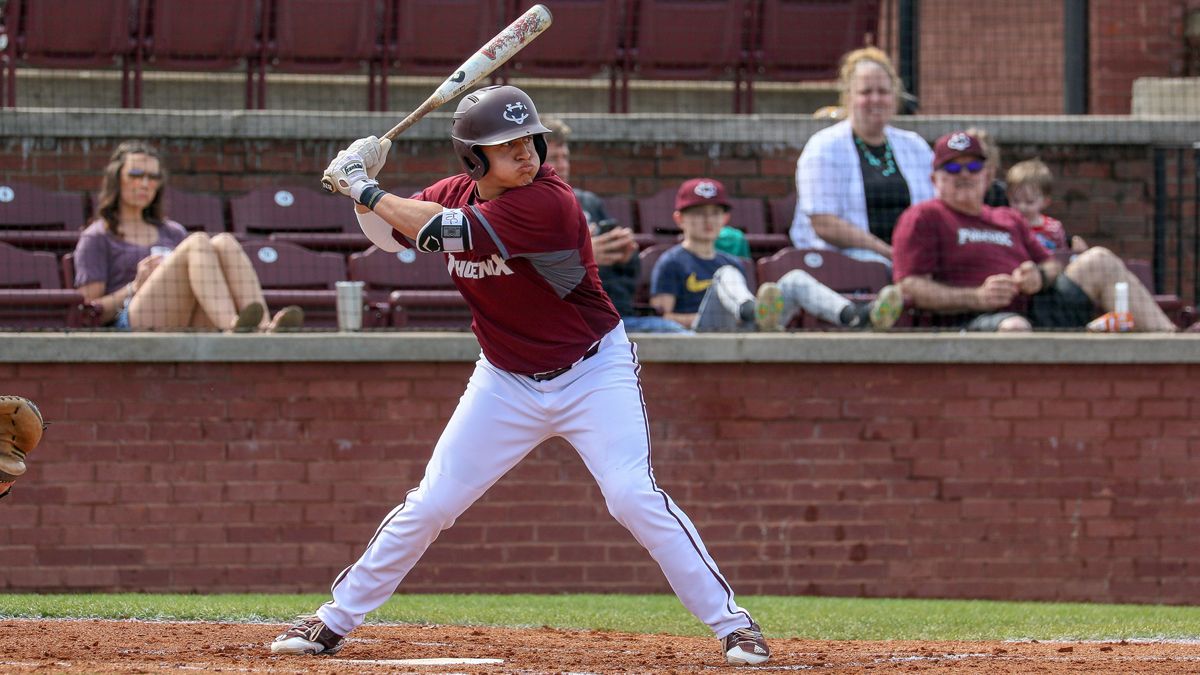 LEBANON, Tenn. – Carlos Moseley posted an RBI base hit and a two-run single, Rayden Sierra and Jordan Hunt each homered and Cumberland used six hurlers, getting the final out with the bases loaded for an 8-6 victory over 10th-ranked Bryan College in baseball action Tuesday evening in Dayton, Tenn.

Sierra’s solo homer to leadoff the seventh broke a 4-all tie and Hunt added a two-run shot to cap a four-run inning for the Phoenix (28-11). The Lions (30-10) scored twice in the bottom of the ninth thanks to an error and a walk that forced in a run, but strikeouts by David Scoggins and Shaq Bermudez ended the contest with the bases loaded.

Moseley and Sierra each posted two hits and Nathan Vaughn, Hunt and Jordan Wheatley each scored a pair of runs for Cumberland. The Phoenix posted 11 hits in the contest but stranded 10 runners, including two each in the fourth, sixth and ninth innings.

Brad Smith got into trouble in the seventh, but Blake Young got a fly ball to end that frame and issued just a walk in the eighth. The Lions posted two singles and a walk before an error allowed a run to score in the ninth against the lefthander, but he struck out Scoggins for the second out of the inning.

Curtis Hoppe walked in a run and fell behind 3-1 to Bermudez before getting him swinging out a full count pitch to end the contest, earning the righthander his second save of the year.

Bryan collected just six hits but took advantage of 10 Cumberland walks, including three apiece by Garretson and Smith, but the Lions left a dozen runners on base, including the bases loaded in the seventh and ninth innings and two more in the sixth.

Trevor Behrent was the only Bryan player with two hits and Wade Weinburger’s two-run homer in the third inning gave the Lions a brief 3-2 edge.

Cumberland got the scoring started with two runs in the third, starting with a single to Wheatley and a walk by Nick Mira. Moseley’s single to right plated Wheatley and Sierra followed with a groundout that scored pinch-runner Vaughn for a 2-0 CU advantage.

That lead did not last long, though, as Bermudez walked with one out in the bottom of the inning and Behrent then doubled to leftcenter, plating a run. Weinburger followed with a two-run homer to center for a 3-2 Bryan edge.

The Phoenix answered with two runs in the fourth, though, as Hector Morales singled with one out and Wheatley reached on an error with two outs. Mira walked again, loading the bases, and Moseley delivered a two-run single to center, putting the visitors back on top, 4-3.

In the bottom of the inning Rodney Tennie singled with one out and moved to second on a fly ball by Scoggins. He stole third and scored on a sacrifice fly by Bermudez, evening the contest at four.

The game stayed that way until Sierra’s solo homer to leadoff the seventh, his 13th of the year. Caleb Kellogg was hit and Vaughn singled with two outs, putting runners on the corners. Kellogg scored on a balk and Hunt followed with a two-run shot to left, his fourth of the season, for an 8-4 CU advantage.

In the ninth Jacob Justice singled with one out and Fernando Garcia walked before a Luke Burris single loaded the bases. Tennie grounded to second but Morales booted the ball, allowing the first run of the inning to score. Young buckled down and struck out Scoggins before giving way to Hoppe, who walked in a run with a free pass to Cody Young but then struck out Bermudez to end the game.

Cumberland opens a three-game series against Campbellsville University this Friday with a 2 p.m. first pitch at Ernest L. Stockton Field-Woody Hunt Stadium. The Phoenix and Tigers finish the series Saturday with a Noon doubleheader, with Senior Day activities set to take place between games.