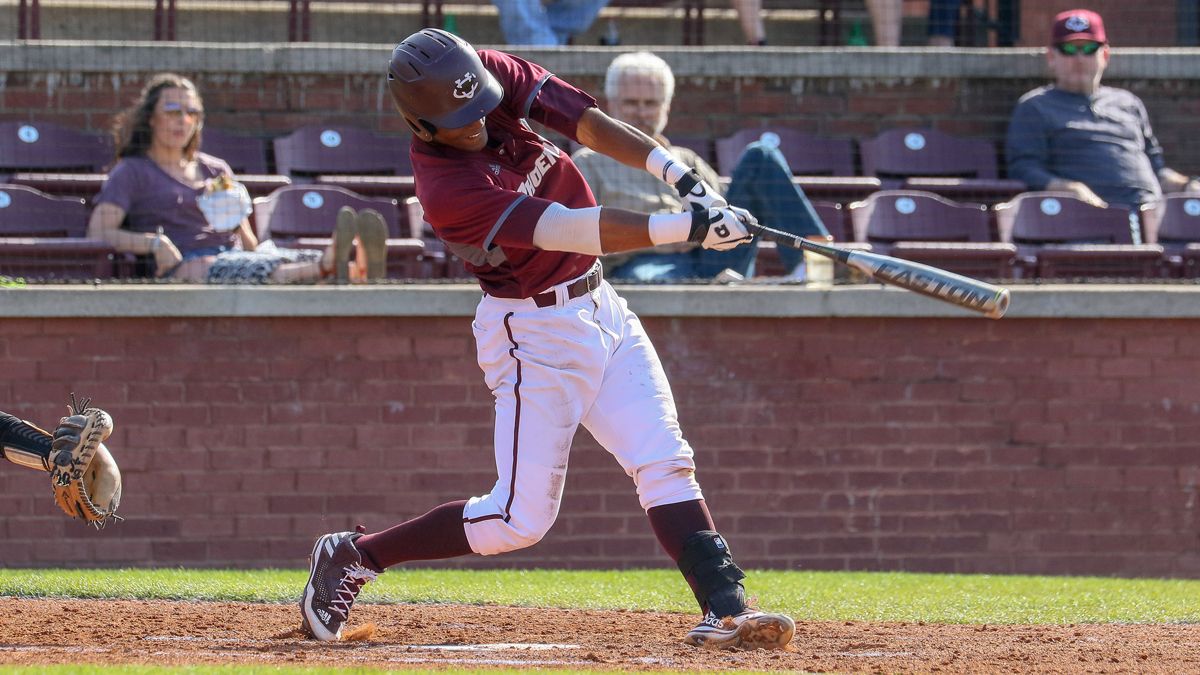 Rayden Sierra belted his 16th home run of the season in Friday's 8-7 loss at the Cumberlands. (Credit Steve Wampler)
Cumberland Univ. at #13 Univ. of Cumberlands | April 20, 2018

LEBANON, Tenn. – Rayden Sierra hit a three-run homer and Caleb Kellogg drove in a pair of runs, but Cumberland committed six errors, leading to four unearned runs in 13th-ranked University of the Cumberlands 8-7 win over the Phoenix in baseball action Friday night in Williamsburg, Ky.

Cumberland and the Patriots conclude the series with a Noon CT doubleheader Saturday.

In a contest that featured four lead chances and three ties, the Patriots plated two runs in the bottom of the eighth thanks to a pair of walks and three Cumberland errors to post the victory.

The Phoenix scored three times in the third inning, two on Kellog’s two-out single, for a 3-2 CU advantage, but a single run in the fifth and two more in the sixth put the Patriots in the lead, 5-3.

Sierra’s 16th home run of the season, a three-run shot to left in the seventh, put the visitors back in front, but against the Cumberlands evened the game in the bottom of the inning on a home run by Orley Arellano.

Jordan Hunt’s sacrifice fly in the top of the eighth made it 7-6 Phoenix, but the two walks and three errors led two a pair of runs for the Patriots in the bottom of the inning.

Thomas Galart (7-4), allowing eight runs, four earned, on seven hits. The righthander walked five, struck out seven and contributed to the team’s fielding issues with three errors of his own.

Josh Avila worked 6.1 innings for the Patriots, giving up five runs, two earned, on five hits. He walked three and struck out 10. Nicholas Purpera (3-1) got the win with 1.2 innings of hitless relief, striking out four.

The Cumberlands scored two runs in the bottom of the first after a leadoff single by Roberto Prado, who went to second on an errant pickoff attempt and third on a wild pitch. Raudy Martinez’s line drive to center plated the run and Alex Dominguez followed with a solo homer to right for a 2-0 UC edge after an inning.

Hunt singled to leadoff the third for the Phoenix and Nick Mira walked with one out. Carlos Moseley’s grounder to the pitcher was thrown away by Avila, allowing Hunt to score. Sierra walked, loading the bases, and Kellogg’s single to right pushed across two runs for a 3-2 CU advantage.

A solo homer to rightcenter by Bryan Benz in the fourth evened the game at three, but the Patriots reclaimed the lead with two more runs in the fifth.

Spata singled up the middle to start the frame and took second on Prada’s sacrifice bunt. Arellano’s reached on an error by second baseman Moseley, putting runners on the corners, and a shallow single to right by Martinez loaded the bases.

Dominguez’s chopper to third turned into a fielder’s choice, with Mykel Gordon getting an out at second, but the relay throw to first for a possible inning-ending doubleplay was wild, allowing two runs to come across on the play for a 5-3 Cumberlands lead.

Mira and Moseley both singled with one out in the seventh, ending the day for Avila, and Sierra greeted UC reliever Hampton Clark with a three-run homer to left, making it 6-5 Phoenix.

That lead did not last long, though, with Arellano’s solo homer to left with two outs in the bottom of the inning tying the game once again.

In the eighth Hector Morales led off with a single and moved to third on a pair of wild pitches before a walk to pinch-hitter Andy Garretson. Hunt’s sac fly to right plated the run and Garretson moved to second on a wild throw to the plate by UC’s Martinez.

Neff then reached on an error, giving Cumberland two-on-with-one-out, but Mira and Moseley both struck out against Purpera to end the inning.

Dominguez walked to leadoff the bottom of the inning and a bunt by Daniel Diaz was thrown away by Galart, with pinch-runner Andrew Patterson taking third on the play. Ramos also bunted and Galart threw that one away as well, allowing a run to score with runners on first and third again.

The winning run came across on another failed pickoff attempt at first, with pinch-runner Sam Seahorn plating the go-ahead run.