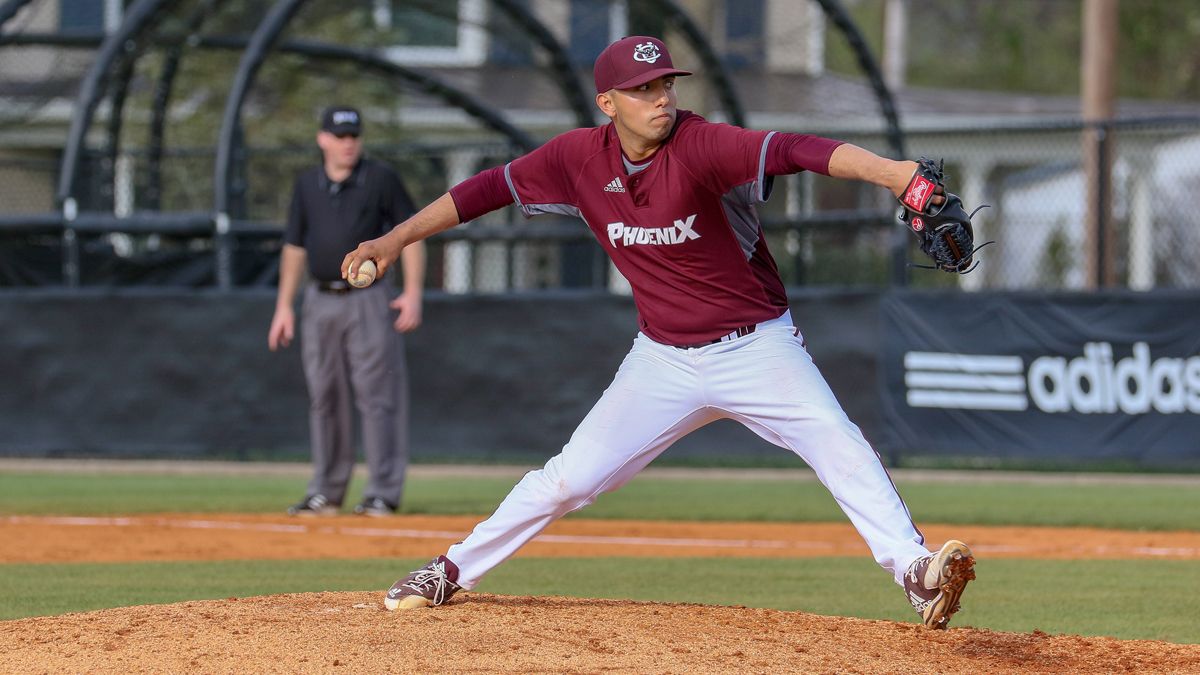 Polo Portela struck out nine in five innings to get the win in a 12-2 victory over Mount Mercy. (Credit Steve Wampler)
Cumberland (Tenn.) at Mount Mercy (Iowa) | February 09, 2019
Cumberland at Southern Nazarene | February 08, 2019

LEBANON, Tenn. – Cumberland’s Polo Portela tossed five innings and Cumberland scored 10 runs in the fourth inning to take a 12-2 victory over Mount Mercy but the Phoenix could not sweep the twinbill giving up two runs in the sixth in a 4-3 loss to Southern Nazarene on Saturday in Oklahoma City, Okla.

Eddie McDaniels drove in two runs with a single and Jared Schmidt plated two more with a double in the 10-run inning for the Phoenix. Jose Vera and Bentley Jones added RBI singles later in the frame for CU.

Portela allowed two runs on four hits with nine strikeouts in five innings to pick up the victory. Matt Rowe and Brad Smith each tossed a perfect inning to finish the seven-inning affair, with Smith striking out one.

Dylan Campbell (0-1) was the tough-luck loser for the Mustangs, giving up seven unearned runs on four hits with four walks and four strikeouts in 3.2 innings. The Phoenix managed just three baserunners against him in the first three innings, but Campbell induced an inning-ending doubleplay in the third and McDaniels was thrown out trying to steal second in the first.

He retired two of the first three batters in the fourth, but a two-out error on Mount Mercy rightfieldder Manny Olutunde opened the door for Cumberland, with 10 straight hitters reaching base.

LaDarius Williams got Cumberland on the board against Southern Nazarene with a two-out RBI double in the first and Schmidt’s solo homer in the fifth evened the game at two. Saunders plated pinch-runner Reid Bass with a two-out RBI single for a 3-2 Phoenix edge in the sixth after Kyle Blackwell doubled.

The Storm got two runs in the bottom of the sixth to retake the lead on an RBI single from Cole Lee and a run-scoring groundout by Shelby Reese.

Schmidt was 2-for-4 with two runs scored and one RBI and Vera posted three hits for CU.

Mount Mercy plated a run in the third after a leadoff walk to Corbin Day and pinch-runner Cayle Webster moved to second on Olutunde’s sacrifice bunt. Evan Jackson’s single up the middle put the Mustangs ahead.

In the fourth Schmidt walked with one out and moved to third on a pair of wild pitches. With two outs Olutunde misplayed a liner by Bentley Jones, plating a run and setting up the big inning for the Phoenix.

Williams singled to leftcenter and Jacob Herrera followed with an RBI single up the middle. Tyler Jones reached on an error by MMU third baseman Owen Oreskovich, loading the bases.

Saunders drew a free pass, forcing in a run, and McDaniels plated two runs with a single. Peyton Wheatley then singled to rightcenter, pushing across a run, and Schmidt followed with a two-run double.

Vera then singled home a run and Bentley doubled to leftcenter for another run and a 10-1 Cumberland advantage.

In the bottom of the inning Oreskovich and Parker Johnson both walked and Day plated a run with a two-out single through the right side.

The Phoenix added two more runs in the fifth, beginning with a single to left by Daulton Smith. Saunders singled to rightcenter with one out and the runners moved to second and third on a wild pitch. Both runners came across on an error off the bat of Wheatley, one of six miscues in the game for the Mustangs.

Schmidt reached on an infield single and Vera single through the right side with two outs in the first inning at Southern Nazarene before the RBI double from Williams gave CU a 1-0 edge after a half inning.

The Storm answered in the bottom of the first, starting with a leadoff walk to Garrett Perez, who went to second on a wild pitch and third on Lee’s infield single. Straub got a strikeout and a flyout, but Emilio Escobedo plated a run with a single through the left side. After a walk to Connor Dayton, Tanner Ladon scored Lee with another single.

Straub worked around two singles and his own error in the second inning, another miscue in the third and a walk and a hit batter in the fourth but kept Southern Nazarene off the board.

Cumberland chipped away with Schmidt’s solo homer in the fifth tying the contest at two. In the sixth Blackwell doubled to right with two outs and Saunders followed with an RBI single up the middle, plating Bass.

Pinch-hitter Jarrett Phillips was hit to start the bottom of the inning for the Storm and after a sacrifice bunt by Christian Dent, Perez was hit as well. Lee’s RBI single to left evened the game at three and a fielder’s choice to second from Reese plated the eventual winning run.