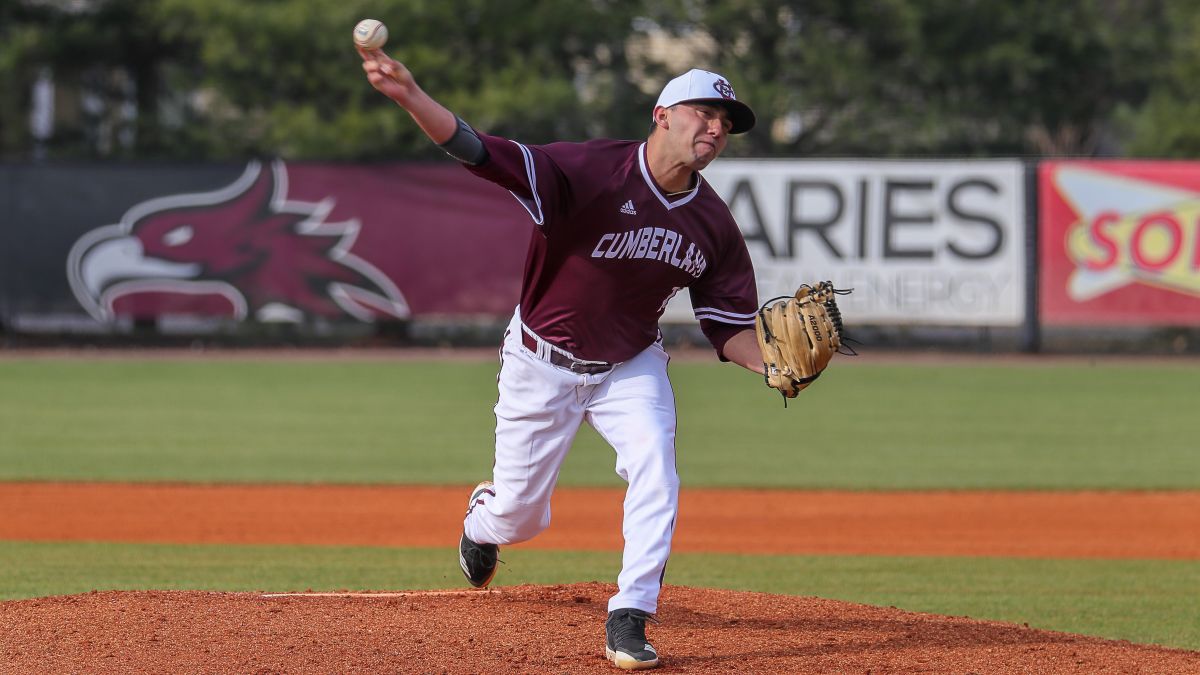 LEBANON, Tenn. – Jared Schmidt drove in the tying run with a triple and scored on a wild pitch and Jose Vera belted his second home run of the season, making a winner of Polo Portela in Cumberland’s 3-2 victory over Madonna University in baseball action Saturday at Ernest L. Stockton Field-Woody Hunt Stadium.

Cumberland trailed 2-0 in the second game before Vera belted a solo blast with one out in the fourth, cutting the deficit in half. Then in the fifth Bo Saunders led off with a single and scored on Schmidt’s two-out triple down the rightfield line. A wild pitch plated Schmidt with the go-ahead run, but CU did not escape with the win without some final-inning drama.

Stephen Parker doubled to start the seventh for Madonna and Matt Staelgraeve lined out to centerfield. Peyton Wheatley then nailed the runner trying to take third for a doubleplay and Portela got a final fly ball to preserve the victory.

Vera posted two of the team’s six hits in the win while Portela (2-0) allowed two runs on four hits with two walks and five strikeouts for the victory.

Madonna plated single runs in the second and third innings and got two insurance runs in the sixth thanks to a pair of Phoenix errors in a 4-0 victory in the opener.

Alex Garbacik and Jalen Thomas each drove in runs for the 2-0 Crusaders edge and Noah Moore added an RBI single along with a run scoring on an error in the sixth.

Donovan Thacker (3-0) worked 6.1 innings for the victory, allowing three hits with no walks and six strikeouts. John Beuckeleare got the final two outs after a one-out double by Vera in the seventh.

Thomas Galart (0-1) suffered the loss for Cumberland, giving up four runs, two earned, on eight hits in six innings. He walked one and struck out four.

Parker led off the second inning with a double in the opener and Staelgraeve’s grounder to second pushed the runner to third. Garbacik’s two-out single up the middle gave the Crusaders a 1-0 lead.

In the third inning Joey Pejuan doubled to left to start the frame and Gordon Ferguson’s sacrifice bunt moved the runner to third. Frankie Lucska walked and Thomas followed with a RBI single on the left side of the infield for a 2-0 Madonna advantage.

Cumberland managed just three baserunners against Thacker through the first six innings, with two of those base hits by Pablo Custodio, who was playing in his first game of the season.

In the sixth Parker singled up the middle with one out and Staelgraeve singled on the left side. CU shortstop Kameron Armstrong booted the ball in short leftfield, allowing Parker to come all the way around to score and Staelgrave to end up at third. Moore then singled to left for the final run of the game.

The Crusaders struck first in the second contest, starting with a leadoff single in the second inning by Thomas, who stole second and scored on Staelgraeve’s double to leftcenter. Moore singled through the left side and pinch-runner Kyle Ariol and Staelgrave executed the double steal for the second run of the inning.

Cumberland and Madonna are scheduled for a 12:30 p.m. doubleheader on Sunday, weather permitting.