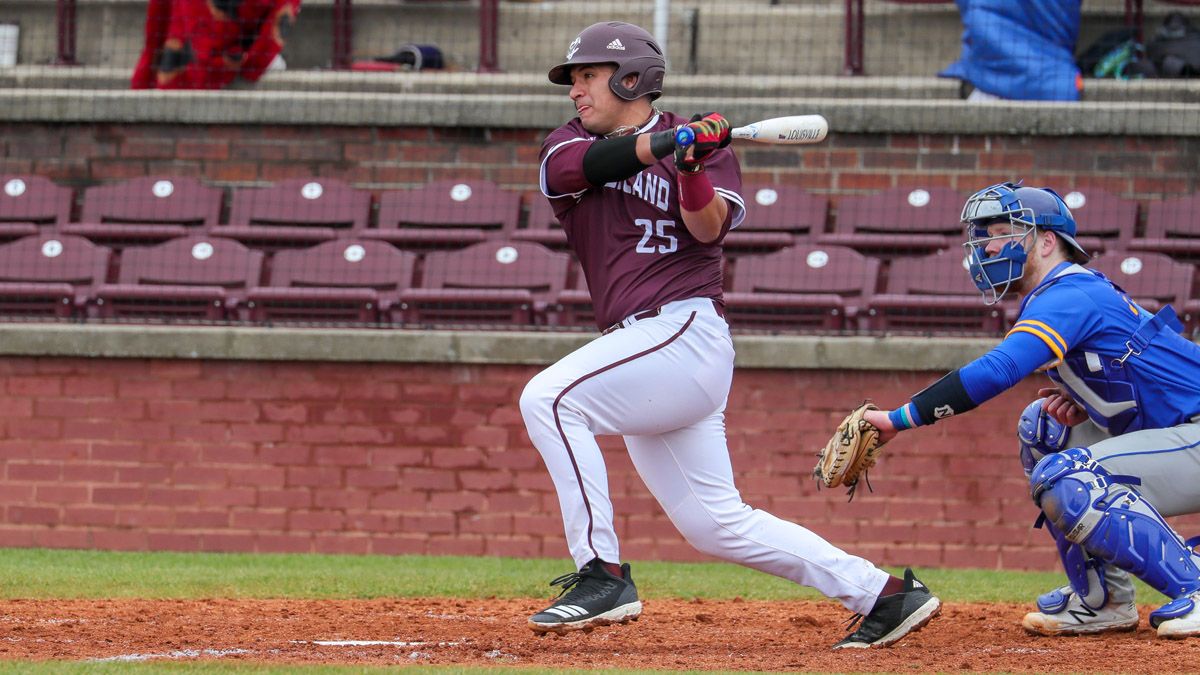 LEBANON, Tenn. – Cumberland scored six runs in the final two innings, including a two-run double from Pablo Custodio to put the Phoenix ahead for good in the ninth, and CU overcame a four-run deficit, posting an 11-10 victory over Brescia University in baseball action Wednesday night in Owensboro, Ky.

In a contest that featured 14 walks, seven hit batters, three errors and 22 combined runners left on base that took nearly four hours to complete, Cumberland plated two runs in the eighth and four more in the ninth before getting the final out with the tying run on base after Brescia pulled within one in the bottom of the ninth.

The Bearcats (4-5) plated 11 runs on just six hits, taking advantage of three Cumberland errors as well as seven walks and three hit batters. Brescia led 8-5 after four innings and 9-5 headed to the eighth before the Phoenix offense finally woke up.

Eddie McDaniels walked three times and scored four runs, including the tying run in the ninth, while Jared Schmidt finished with three hits and Custodio collected two doubles and three RBIs. LaDarius Williams knotted the game at nine with a two-run single with two outs in the ninth before Custodio’s two-run double put Cumberland ahead for good.

Cumberland trailed 9-5 entering the eighth inning and got two runs back but could have had more.

McDaniels walked and Williams was hit to start the inning and Schmidt singled to right, plating a run. The runners moved up on a wild pitch and Jose Vera pushed across Williams with a groundout, but Schmidt was stranded at third after Austin Forest grounded out to end the inning.

Cumberland tied the game in the ninth when Bentley Jones singled to leadoff and pinch-hitter Daulton Smith singled with one out. McDaniels grounded into a fielder’s choice, putting runners on the corners, but he stole second and both runners came across on a single down the leftfield line by Williams.

Schmidt then singled, setting up Custodio’s two-run double for an 11-9 Cumberland edge.

Omar Yepez doubled with one out in the bottom of the inning for Brescia and an infield single with two outs from Yonnelle Firebrace scored the run, but Zach Johnson grounded out to third to end the contest.

Matt Rowe (1-0), the fourth Cumberland pitcher of the game, got the win, allowing one run on two hits in two innings. Caleb Cox tossed 3.1 innings of relief before Rowe, keeping the Phoenix in the game. He gave up one run on one hit with four strikeouts.

Chase McLaren (1-1), the third Brescia hurler, suffered the loss, allowing four runs on five hits in 1.2 innings. Alex Pennes finished 2-for-4 with three runs scored while Zach Scheid had two RBIs and Zach Johnson and Tyler Milby each scored twice for the Bearcats.

McDaniels led off the contest with a single to left and Williams walked. After a strikeout and a fielder’s choice, Vera delivered a two-out RBI single through the left side for a 1-0 edge after a half inning.

The Bearcats answered with two runs in the bottom of the inning, starting when Johnson reached on a throwing error and Pennes singling to left. Both runners moved up on a passed ball and Johnson came across on a ground ball by Joseph Guidry. The second run scored on a throwing error by the Phoenix, giving Brescia a 2-1 advantage.

Peyton Wheatley singled up the middle to leadoff the second inning and Bo Saunders was hit. The runners moved up on a balk and Wheatley scored on a groundout from McDaniels, evening the game at two.

In the third Custodio doubled to start the frame and Jones doubled down the leftfield line with two outs, driving home a run. Wheatley followed with a two-bagger as well, giving the Phoenix a 4-2 lead.

The advantage was short-lived, as Johnson was hit to leadoff the bottom of the inning and Pennes walked. Milby drew a free pass with one out, loading the bases, and Scheid’s walk forced in a run. Yepez grounded to short but the ball was booted, allowing two runs to come across for a 5-4 Brescia edge.

Cumberland knotted the game again in the top of the fourth when McDaniels drew a leadoff walk, went to second on a groundout and third on a wild pitch. Custodio’s groundout plated the run, evening the game at five.

The Bearcats answered with three runs in the bottom of the inning, starting with a double from Pennes and two-out walks to Milby and Nathaniel Harris. Scheid’s single to center scored two runs and Brescia executed the double steal for the third run and an 8-5 advantage.

Brescia added another run in the seventh when Scheid was hit with one out. Pinch-runner Mark Liberato scored on a two-out single to deep leftcenter by Alejandro Hernandez, making it 9-5 Bearcats.

Cumberland hosts Indiana Wesleyan in a three-game series this weekend beginning Friday with a single game at 2 p.m. Saturday’s doubleheader starts at Noon. The Phoenix have added games for Sunday and Monday against Midland University as well.