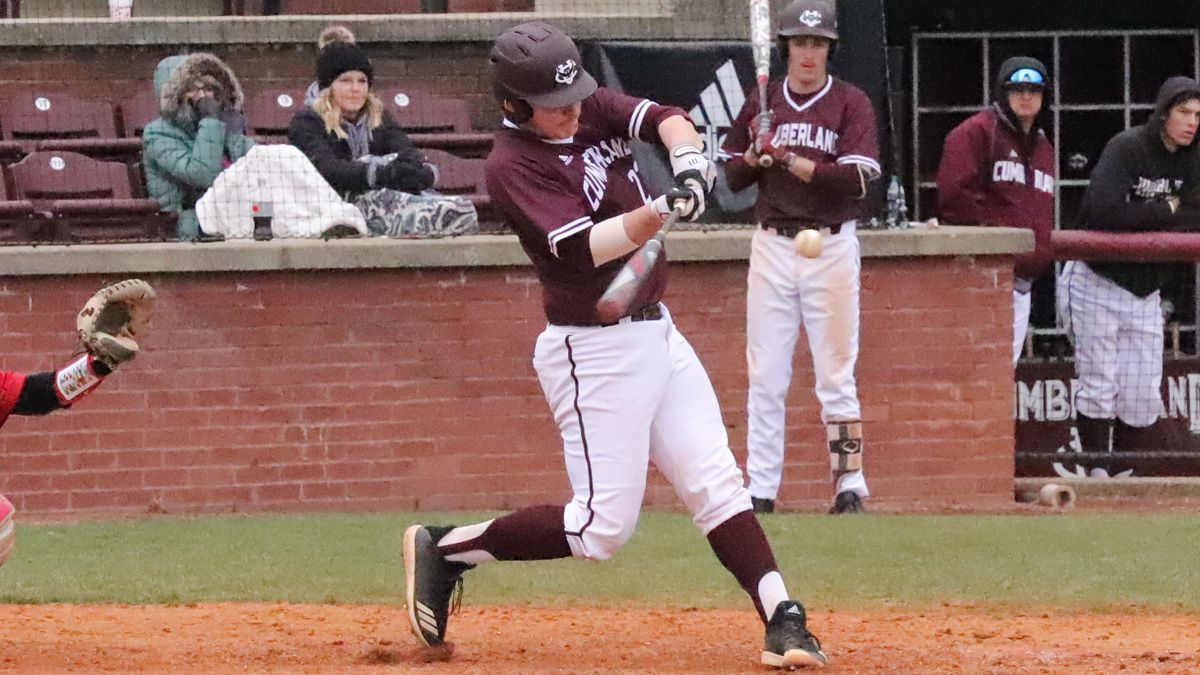 LEBANON, Tenn. – Jacob Herrera hit a solo homer to leadoff the bottom of the seventh for a game two victory and Thomas Galart tossed a gem in the opener for Cumberland in a doubleheader sweep, 2-1 and 6-5, over Indiana University-Kokomo in baseball action here Thursday at Ernest L. Stockton Field-Woody Hunt Stadium.

Galart (2-2) struck out seven while allowing just three hits and one run in a complete game in the first contest. The righthander retired the first eight batters of the contest and then the final eight as well, giving up a solo homer in the fourth that tied the game at one.

Cumberland (10-7) scored three times in the fifth in the second game to take a 5-2 lead, but two errors, two hits and a walk by the Cougars (9-6) in the sixth knotted the contest at five. Caleb Matthews nearly hit a grand slam with two outs in the seventh for IU-Kokomo, but a nice running grab at the wall by Eddie McDaniels kept the game tied.

Herrera worked the count full and fouled off two pitches but belting a high fastball into the net in front of the scoreboard for his first home run of the year and a 6-5 victory.

The Phoenix used five pitchers in the contest, with Caleb Cox working 3.2 innings in a start, giving up one earned runs on four hits. He walked four and struck out three. Christian Straub was the unlucky hurler when CU made the two errors in the sixth, allowing three unearned runs. Matt Rowe (3-0) picked up the win with 1.1 scoreless frames, giving up two hits with one strikeout.

McDaniels walked to leadoff the first inning in the opener but Jose Vera bounced into a fielder’s choice. With two outs Vera moved to second on a wild pitch and Pablo Custodio singled sharply to left. Another wild pitch allowed Vera to come across for a 1-0 edge.

Galart retired the first eight batters of the contest before a two-out single to center by Tavon Lindsay in the third. Josh Fewell provided the only offense in the game for the Cougars with a two-out solo homer just to the right of the batter’s eye in the fourth, a line drive that sailed into the pine trees, evening the contest at one.

Noah Darr’s one-out single in the fifth was the only other hit for IU-Kokomo, with Galart retiring the final eight batters of the contest.

Cumberland regained the lead in the fifth when Daulton Smith beat out an infield single up the middle. He moved to second on a Bo Saunders sacrifice bunt and third on a wild pitch. McDaniels drew another free pass and Vera bounced into a fielder’s choice, allowing the go-ahead run to score for a 2-1 CU advantage.

Custodio collected two of Cumberland’s five hits in the win against two Cougars hurlers. IUK starter Justin Reed allowed one run on four hits in four innings with one walk and four strikeouts. Ryan Beck (1-2) suffered the loss, giving up one run on one hit with one walk and one strikeout.

Schmidt and Custodio started the scoring in the second contest with two long drives to leftfield with two outs in the first. Schmidt belted a hanging curveball down the line and Custodio’s line drive into the trees just to the left of the scoreboard gave the Phoenix a 2-0 lead after an inning.

Fewell walked to leadoff the second for the Cougars and went to second on a failed pickoff attempt. He moved to third on an infield single by Kody Bledsoe, between third base and shortstop, and scored when John Tuttle’s grounder to short got past Vera into centerfield, cutting the CU advantage in half.

Cox retired the first two batters in the third but walked Jared Heard, who stole second, and with the righthander behind in the count 3-0, Fewell also drew a free pass. Tyler Burthay then singled to center, plating Heard to even the contest at two.

Cox again ran into trouble in the fourth after getting the first two outs, with Cody Bible singling to center before a walk to Lindsay, ending the day for Cox. Ryan Hill induced a groundout from Matthews to end the inning with the game still tied at two.

Cumberland retook the lead in the fifth thanks to three hits and a pair of IUK errors after Peyton Wheatley reached on a one-out error and pinch-hitter LaDarius Williams chopped a single to right. The runners moved to second and third on a balk and pinch-hitter Kyle Blackwell lifted a fly ball to center.

Wheatley scored easily and the high throw allowed Saunders to take third. Tuttle’s throw to third sailed into leftfield and Saunders came around to score. The Phoenix added another run with a double down the leftfield line by Reid Bass and a short single to right from Vera extended the advantage to 5-2.

The Cougars plated three runs with the help of two Cumberland errors to answer in the sixth.

Darr reached on a throwing error by Tyler Jones to start the frame and Bible dumped a single into rightcenter, putting runners on the corners. Lindsay singled to right, plating a run, and Matthews reached on a fielding error at first, loading the bases with one out.

Heard walked, forcing in a run, and Fewell’s soft liner off the end of the bat fell in centerfield, plating a run to tie the contest, but Wheatley got a force out at third on the play.

Bledsoe singled to leadoff the seventh for the Cougars and Darr’s sac bunt moved the runner to second. Pinch-hitter Austin Weiler walked and Bible lined out to left before an infield single on the right side by Lindsay loaded the bases. Matthews drilled a high fly ball to left, but McDaniels made a nice running grab just short of the wall to end the inning.