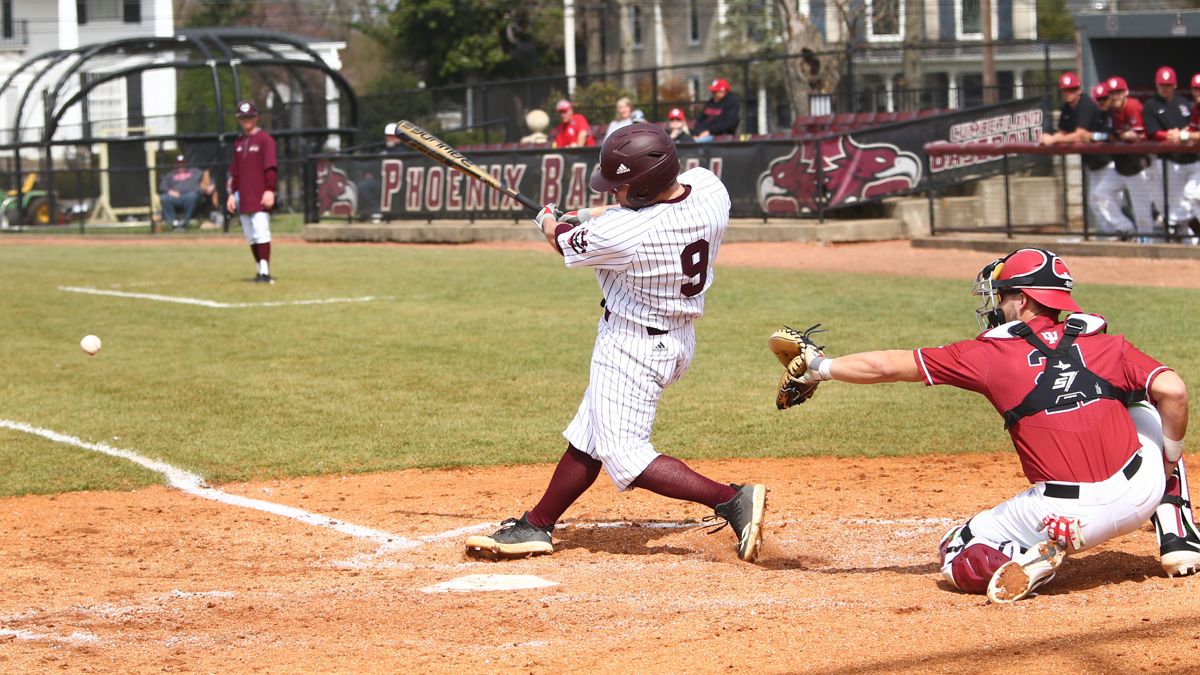 LEBANON, Tenn. – Kyle Blackwell posted three hits and scored twice while Jacob Herrera and Pablo Custodio each belted home runs in the opener and Bentley Jones and Jose Vera both homered in the second contest, as Cumberland swept a doubleheader, 11-6 and 10-4, over Indiana-South Bend in baseball action here Monday at Ernest L. Stockton Field-Woody Hunt Stadium.

The Phoenix (14-7) swept the four-game series to run its winning streak to 12 games heading into this weekend’s Mid-South Conference opening weekend at the University of Pikeville.

Herrera belted a two-run homer in the second inning and Vera’s RBI double were part of a three-run third inning. Custodio’s solo shot started a four-run fifth inning that included a two-run single by Bo Saunders.

Cumberland starter Christian Straub (1-0) struggled through 4.2 innings to get the win, allowing three runs on three hits. He walked four, hit two batters and struck out six, stranding the bases loaded twice. Caleb Cox got the final out of the fifth with the Titans trailing just 5-3 and tossed a perfect sixth inning after the Phoenix plated four runs to break the game open.

IU-South Bend’s Andy Ross (1-3) suffered the loss, giving up eight earned runs on 11 hits in five-plus innings. He seemed to run out of gas in the sixth, with the Phoenix pounding out 12 hits with two walks and three strikeouts against the lefthander.

Bentley Jones’ three-run homer in the first inning gave the Phoenix a 3-2 edge, but the Titans (1-13) scored twice in the third to regain the lead. Custodio’s RBI single tied the contest and two more runs scored later in the inning on a wild pitch and error.

Vera put the finishing touches on the victory with a grand slam in the sixth, capping a 3-for-7 day with two runs scored and five RBIs. Cumberland managed only seven hits in the 10-4 win but took advantage of four walks and two hit batters by Indiana-South Bend.

IUSB starter Eric Calip (0-1) took the loss, giving up four earned runs on three hits in four innings. He walked three, hit two batters and struck out two in his first appearance of the season.

Jared Schmidt’s line drive was dropped by IUSB rightfielder Jose Sanchez with two outs in the first in the opener and the senior went to second on a wild pitch. He scored on a single to left from Custodio for an early Cumberland lead.

The Phoenix added to their advantage in the second inning, starting with a leadoff single to right from Blackwell. Herrera followed with a two-run homer to left, his second of the year, for a 3-0 CU advantage.

Saunders singled to rightcenter and stole second later in the frame. Vera doubled to leftcenter with two outs, plating Saunders for a 4-0 lead.

Sanchez singled and Spencer McCool walked to begin the third for the Titans and the runners moved up on a wild pitch. Devon Connors scored a run with a sacrifice fly to right and after a free pass to Jordan Moore, pinch-runner Matt Miller and McCool executed the double steal for the second run of the inning for IUSB.

Cumberland got a run back in the bottom of the inning when Blackwell reached on a bad-hop single and moved to second on a wild pitch. Herrera’s grounder to short was thrown away, allowing Blackwell to come around for a 5-2 Phoenix edge.

Colin Mack walked to leadoff the IUSB fifth inning and with one out, McCool reached on an error. Moore also drew a free pass with two outs, setting up a pinch-hit RBI single from TJ DeHerrera, cutting the CU lead to 5-3 and ending the day for Straub.

Logan Young grounded out to end the inning, with the Titans leaving the bases loaded for the second time in the contest.

Cumberland broke the game open with four runs in the bottom of the fifth, starting with a one-out homer to left by Custodio. With two outs Blackwell singled to leftcenter and Herrera walked before an RBI single to left by Peyton Wheatley.

Both runners stole and came across on a two-run single to right from Saunders, stretching the lead to 9-3.

Three straight pinch-hitters reached to leadoff the sixth for the Phoenix, with Daulton Smith and Cameron Jennings both singling and Austin Forest drawing a walk. Smith came across on a fielder’s choice by Tyler Jones and a second run scored when the throw to first was wild on a possible doubleplay.

Sanchez and McCool both singled to begin the seventh for IUSB and Connors belted a three-run homer to leftcenter, cutting the CU advantage to 11-6.

Indiana-South Bend struck for a pair of runs in the first inning of the second contest, taking advantage of a Cumberland error.

Sanchez reached on a throwing error with one out and McCool followed with an RBI double to leftcenter. Moore’s two-out single to center plated McCool for a quick 2-0 lead for the Titans.

The Phoenix answered in the bottom of the inning when Vera singled with one out and Custodio was hit with two outs. Bentley Jones drilled a three-run homer to left on the first pitch from Calip for a 3-2 CU advantage.

IUSB started the third inning with three straight singles from Mack, Sanchez and McCool, the last one scoring a run and ending the day for CU starter Ryan Hill. Moore blooped a single to rightcenter with one out, plating another run, but Smith got two pop-ups to end the frame with Cumberland trailing only 4-3.

Eddie McDaniels was hit to leadoff the bottom of the inning, went to second on a wild pitch and stole third. Schmidt walked with one out and Custodio singled to left, scoring a run. Bentley Jones drew a free pass, loading the bases, and after a fielder’s choice, a wild pitch by Calip got to the backstop.

Custodio started toward the plate but the ball bounced hard off the brick. The runner stopped but the catcher’s throw to the plate was wild, allowing Custodio to score. The circus continued when the first baseman’s throw to second got into short center, with pinch-runner Quinton Jabeth coming across for a 6-4 Phoenix lead.

Blackwell doubled to leadoff the sixth and Forest drew a walk before a grounder by LaDarius Williams was booted, loading the bases. Vera greeted IUSB reliever John Ward with a monster blast to left, over the scoreboard, for a grand slam, and the final runs of the game.