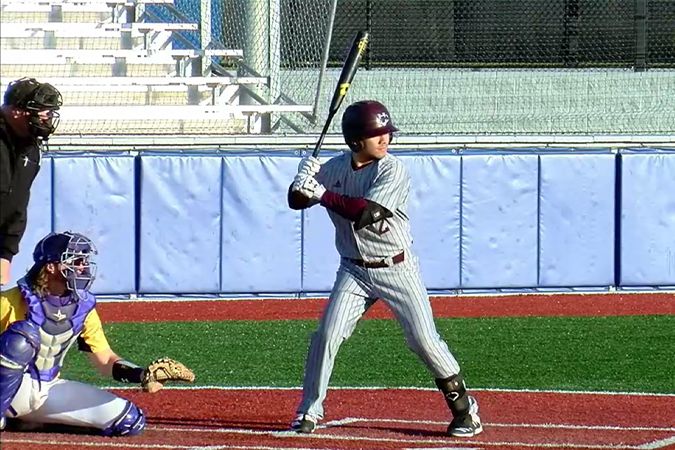 The 12th- ranked Pilots (5-0) showed that they have some offensive firepower in Cumberland’s season opener. As well as swinging the bat well LSU-Shreveport stole 15 bases in two games.

Zeke Maldonado had very strong showing in his first games as a Phoenix collecting six hits and three doubles. Josh Morgan had two hits in his debut as a Phoenix as well including a solo shot to right field in game two and Jose Vera hit three run homer in game two for his first home run of the season.

Cumberland starter James Hatcher picked up his first loss as a Phoenix after having a perfect 7-0 season a year ago. Hatcher got beat up for nine hits and four runs in 3 1/3 innings pitched.

Zeke Maldonado posted three hits and one double of Cumberland’s five hits in the game.

LSUS starter Victor Silverio struck out seven in 3 2/3 innings while giving up three runs on four hit and two walks.

The Pilots jumped out to a 2-0 lead after the first inning. LSUS picked up four straights hits to open the game with Payton Robinson scoring on a single from Bakari Gayle after he doubled on the first pitch of the game. Cain Castille came around to score on a ground ball to the second baseman off the bat of catcher Ryne Ray.

LSUS tacked on two more in the third, Castille singled through the left side to open the frame and Hatcher walked the next better just before Taylor Fajardo hit a double to deep right field to score two.

The Phoenix did all their damage with two outs in the top of the 4th. Mykel Gordon scorched a single right back up the middle and Josh Morgan fought a ball in to no man’s land in right field to score one. Chandler Hughes drew a walk and both Morgan and Hughes advanced on a passed ball. Again, LSUS catcher Ryne Ray let another pitch get by him to bring home Morgan and then an errant throw allowed Hughes to come around as well.

With bases cleared and two outs Velez drew a walk, Ford was hit by a pitch and Vaughn worked a walk to chase the starter out of the game. Tyler Stokes popped up with the bases loaded to end the threat.

The Pilots took an unsurmountable lead after scoring eight runs on eight hits in the bottom of the fifth inning. Fajardo hit a three-run home run to right field as well as a double of the left field wall to score another.

Colton Sellers finished the last two innings for LSUS on the hill without allowing a hit.

Starter Daniel Alvarez allowed eight runs in five innings of work. He picked up three strike outs and two walks while giving up nine hits. Lefty Matt Risko pitched one inning in relief giving up two hits and one run and Wyatt Blessing finished out the game for Cumberland throwing two innings, giving up five runs on four hits.

Alvarez hit the first batter of the game on his first pitch and on the very next pitch Gayle drove a ball the opposite way for a double and brought Robertson around to score. Castille traded places with Gayle as he roped a double to the left field gap, 2-0 after the first.

Josh Morgan opened the second inning by hammering a fastball on the outer-half over the right field wall for his first home run of the season, 2-1 Pilots after two.

Vaughn drew a no out walk in the top of the third and swiped second on the first pitch, right before Stokes drove a high fly ball to right that fell in for an error allowing Vaughn to score. Stokes ended up on third base and Maldonado roped a double in the left field gap to give CU their first lead of the day, 3-2.

The lead did not last long as LSUS tied it right back up in the bottom half from a single by McNicholas, a double from Castille and then an error from Vaughn up the middle. Alvarez did a great job working out of trouble though as he stranded runners at second and third.

The Pilots reclaimed the lead in the in the bottom half of the fourth after a sac fly from Castille and then a no-doubt three-run home run by Taylor Fajardo to left field, Fajardo’s second homer of the day.

Maldonado reached base with a walk, two batters late, Jose Vera destroyed an outside fastball over the right-center field fence for a two-run home run. Cumberland continued to pose a threat after Morgan walked and Hughes reached on an infield single to chase LSUS starter. Reliever David Jones threw an errant pitch to allow both runners to advance, but Jones got Reid Bass to strike out and strand two runners, 7-5 LSU-Shrevport after the top of the fifth.

In the bottom half of the inning, Ricky Perez doubled to left and Kody Kolb was hit by a pitch. The duo executed a double steal and leadoff man Robertson hit behind the runners to tack on one run.

LSUS added one run in the sixth off of a fielder’s choice to score McNicholas. In the seventh, Kolb hit a solo shot and Payton Robertson singled and stole second, third and home to add another, 11-5 Pilots after seven.

Wyatt Blessing got the first two guys in the eight inning out before a walk, a single to left and hit by pitch loaded the bases for Robertson. Robertson roped a bases clearing double to make it 14-5 going into the  ninth.

Cumberland would get one back on a Jose Vera sacrifice fly to score Maldonado to make the final score, 14-6.

The Phoenix and Pilots will finish off the series tomorrow with a double header. First pitch is set for 1:00 p.m.