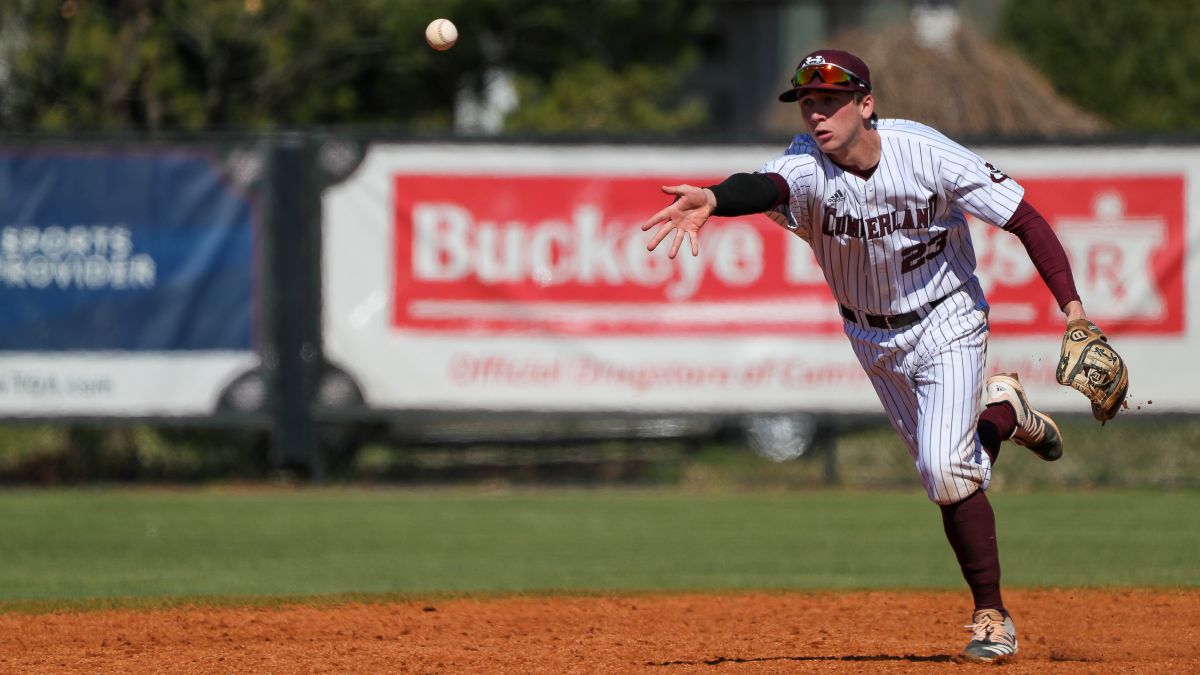 LEBANON, Tenn.-- The Phoenix failed to keep up with the Indiana Wesleyan bats, dropping both of today’s games, 5-4 and 15-5, in Woody Hunt Stadium-Ernest L. Stockton Field.

Game one saw an immediate departure from the pitching woes seen early by both team’s yesterday, Seth Wyse and Connor Cantrell racking up strikeouts. Following the pitcher’s lead, defense highlighted the first four frames of the first game.

Through the first half of the game, the closest either team got to earning runs came for the Wildcats in the top of the third. Back-to-back hits saw Indiana Wesleyan threatening with a runner in scoring position. With two outs, the Wildcat batter smacked a groundball that looked to be going through the second base gap to score a run, but Joey Fregosi made a next level play, extending on the dive to collect the ball. The batter beat the ball to first, but Mykel Gordon rifled the ball over to home plate where Brett Bello forced out the runner, ending the inning.

The Phoenix lit up the scoreboard in the bottom of the fifth. Bello led off for Cumberland, reaching base on a shallow infield fly that Indiana Wesleyan’s second baseman lost due to sun in his eyes. Nathan Vaughn followed him up by laying an excellent bunt down the left line, advancing the runner and beating out the throw to first. With runners on first and second, Maldonado ripped a single into left center, bringing in two runs and advancing Maldonado to second when the centerfielder bobbled the ball. Cumberland’s final run of the inning came off the bat of Gordon as slammed a double into dead center over the fielder’s head, driving in Maldonado for a 3-0 Phoenix lead.

The Phoenix went into the seventh needing only three outs to walk away with a win, but the Wildcats found their bats and home plate. Indiana Wesleyan scored five runs on six hits, five of the first six batters reaching base. With bases loaded, only one out, and the game tied at 3-3, Matt Rowe was brought in to relieve Wyse. Two more runs were batted in before Rowe ended the top of the inning with a strikeout. Tyler Stokes rocked a solo, lead-off homer over the center field wall to close the gap to 5-4, but Cumberland was unable to post any more runs, taking the loss.

Wyse (0-3) got the start on the mound for the Phoenix and pitched six very good innings before the train came off the rails in the seventh on the way to a loss. He held the Wildcats to no runs and only three hits with four strikeouts through the first six innings, but in a third of the seventh frame allowed five hits and five runs (three earned). Rowe finished the final 0.2 innings of the game, giving up one hit while striking out another.

Cantrell (3-1) steered clear of mistakes, earning a win in six innings of play on the mound for Indiana Wesleyan in game one. The senior struck out six batters, while Cumberland posted three runs (none earned) on seven hits against him. Tanner Kiliian came in for the final inning to register the save, fanning two Phoenix batters.

Gordon did a good job from the plate in the first game going 2-for-4 with both hits coming on long doubles, while driving in one of the team’s four runs for his first 2-out RBI of the season. Tyler Stokes went yard as the game was drawing to a close to earn an RBI, the team’s only other coming from Maldonado.

The Wildcats’ strong finish to the first game carried over to the second game, giving the Cumberland pitching staff problems. Risko got the call to start the game, and saw seven batters before he ran into trouble, Coach Hunt pulling him in favor of Christian Straub after Indiana Wesleyan scored three run with a runner on first and two outs. A single through the right side and two straight hit batters saw another run scored and the bases loaded. The next batter hit a single to up the score to 5-0 before Straub got the batter to hit into a unassisted out by Vaughn at second base.

Indiana Wesleyan continued to rack up runs through the following innings. The Wildcats dropped another big inning on Cumberland in the second with six more runs to boost the lead to 11-0, before getting at least one run in each of the next three innings.

In the bottom of the seventh down 15-0, Cumberland finally got on the board, scoring five. With runners on first and second, Chase Ford slapped a ball down the left field line, bringing Chase Smith around to score. The next batter, Tyler Jones, hit a three-run bomb over the scoreboard in left field who was then followed by Kemper Dixon smashing a solo shot into the same spot. The five runs made the final score look better, but Indiana Wesleyan’s advantage was insurmountable winning 15-5.

Six players got a chance on the mound for the Phoenix in the game, Risko (0-1) getting the start and loss in 0.2 innings played with four runs on three hits. Straub, Wyatt Blessing, Jordan Burdette, Kobe Carter, and Wiley Barton all made appearances on the mound for Cumberland in game two.

Indiana Wesleyan received great innings on the mound from the two pitchers they played, Austin Swift (1-0) earning the win in five innings played with no runs on four hits and a whopping 10 strikeouts. He was relieved by Ethan Dixon who gave up five runs on three hits to Cumberland while striking out four batters.

Cumberland struggled at the plate the entire second game, the team’s only runs coming after the game was out of reach. Jones was one of the few bright spots offensively for the Phoenix, driving in three runs on 2-for-2 batting with a huge homerun. In limited plate appearances, Dixon went 1-for-2 with a long ball of his own.

The Phoenix finish their series against Indiana Wesleyan tomorrow, looking to even the series in a nine inning game slated for a 2 p.m. start.