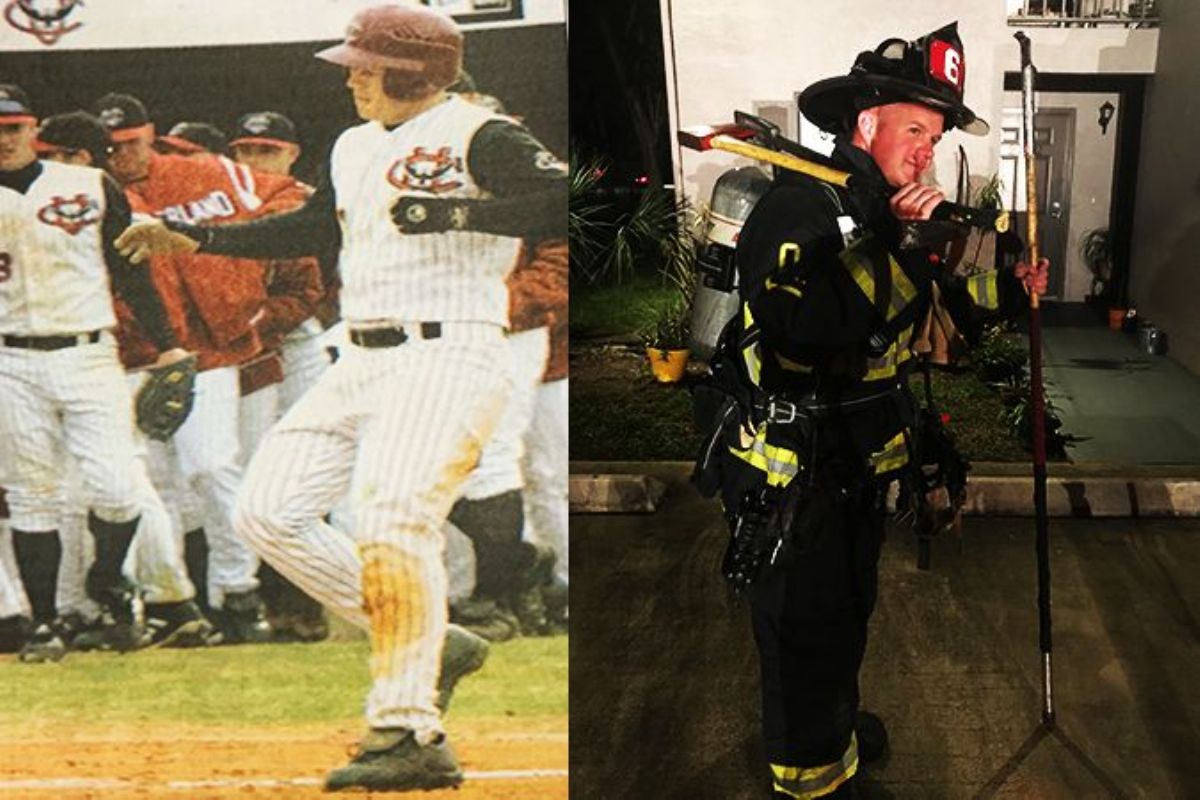 Propst hitting a homerun in the 2006 season.(Credit: Dallus Whitfield)

LEBANON, Tenn.—Former Cumberland University baseball player and 2008 alum Courtney Propst has since moved home to Orlando, Florida to work as a firefighter and paramedic for the past 11 years.

Propst was a two-year guy at Cumberland after playing his first two seasons at Seminole Community College, now Seminole State. He transferred to Central Florida but did not like the situation he was in. He saught a new home and by chance had some friends playing at Cumberland was able to get in touch with Coach Woody Hunt.

“I was at another university in 2005 and was unhappy with the situation I was in. Summer of 2005 I was looking for somewhere else to play baseball. I had a few other schools that showed interest. A few other former players were currently playing baseball for Cumberland that I have played with,” Propst said.

“So Coach Hunt called me that summer and offered me a scholarship. It was a very difficult decision to make since I had never visited the school, met any of the coaches, and really had no idea where Lebanon, Tennessee was at. But the guys I knew all told me how great of a man Coach Hunt was and that he was an honest and fair coach. Those were the things I was looking for and it helped me make my decision,” he continued.

His decision to take a chance on a place that he had never been before paid off for him and the baseball program. Propst was a prominent part of the Cumberland lineup in the 2006 and 2007 seasons helping the program win 99 games. He cracks the all-time list in several single-season and career categories despite just playing at CU for two seasons. He hit .358 over 441 at-bats and mashed 24 home runs in two seasons. He is also the all-time leader in hit by pitches in the season with 29 in 2007.

Both squads that Propst played on made runs to the NAIA World Series and the 2006 team made it all the way to the national championship before dropping a heartbreaker to Lewis Clark State University, 5-4 in 11 innings.

“The entire 2006 season was amazing. The best group of guys I have ever played with and we had a lot of fun. There were a lot of really good ballplayers.”

“It’s hard to believe it has been 14 years since that game. I still get chills thinking about it. I still remember many parts of the game. LCSC was the home town team and they had a lot of fans there. We were lucky enough to have a good amount of fans, friends, and family members that were able to make the long trip to come to support us as well.”

“Whenever LCSC scored a run or made a good play, it was pretty loud in that stadium. When the Cumberland Bulldogs did something well it was nearly as loud but you knew exactly where our fans were, they were all sitting together cheering for us.”

“LCSC was a good team as well but there were a few calls in that game that made it go the other way. I led off the bottom of the ninth with a tie game and got hit by a pitch,” Propst said.

“I end up as the winning run on third base with 2 outs. Derek Depew is at the plate with a 3-0 count. The next pitch is clearly high and out of the strike zone and the umpire called it a strike that would’ve scored the go-ahead run. We ended up not scoring that inning and later lost the game in 11 innings.”

Propst got to play for one of the best coaches in the business, Woody Hunt, and he had nothing but great things to say about Coach Hunt.

“Playing for Coach Hunt was great. I feel very lucky and fortunate to get the opportunity I got at Cumberland University. Coach Hunt was way more than just a coach to me. He truly cares about his players. All of the stories and one-liners from past players about Coach Hunt would be amazing to hear. I know my buddies and I have plenty as well. Some of them we had to do a lot of mountain climbers for too,” he said.

“As a player, one of my favorite things I heard Coach Hunt say was, ‘as long as you can hit, we will find somewhere for you to play.’ We all know the Cumberland Bulldogs have produced a lot of good hitters. I love Coach Hunt, and thankful for everything he did for me and he will always be my favorite coach I ever got to play for.”

Coach Hunt reciprocated the high remarks about Propst saying that he was one of his favorite players that have come through the baseball program here.

“He was overall a really good player. He could run and hit. He was one of the key members of the 2006 team that should’ve won the national championship. He was so fun to be around and a really good teammate. He had a great spirit about him and just really loves Cumberland.”

Outside of baseball at Cumberland, Propst said that baseball was a year-round commitment, but he would make time to go support the other teams.

“Since Cumberland was such a small school, it seemed like we knew almost all of the other student-athletes and I felt like we all supported and rooted for each other.”

Propst made the TranSouth All-Conference Team in both 2006 and 2007 and went on to graduate in 2008 with a bachelor’s degree in Recreation Administration.

“I learned many valuable lessons from my time at Cumberland. I believe the most important thing I learned and I’m still not very good at it but there is always tomorrow. You are going to get another at-bat. Don’t let that strikeout or loss affect you the next time you get a chance,” Propst said.

Coach Hunt told a quick side story about a time when Propst struck out, “He struck out and was walking back to the dugout and was hitting his helmet with his bat. I looked at him and said, ‘Next time take your helmet off!” He said with a chuckle.

Continuing with the life lessons that Propst took away from his time at CU and the game of baseball, “Learn from what went wrong or what you did wrong and try to correct it. I use that every day still. If I mess something up, hopefully, it wasn’t too bad and nobody got hurt but I will definitely learn from my mistake and try not to repeat it.”

“I have so much respect for Coach Hunt, along with the other coaches that were there when I played. I work with a lot of wonderful people that I respect and learn from every day. I hated when I let my team and coaches down at Cumberland and I hate when I don’t perform at work and feel like I let my crew down.” Propst added.

After graduation, Propst looked for a job around Lebanon but did not have any luck, so he returned home to Orlando to become a firefighter in 2009.

“I worked for Polk County Fire Rescue. I came to the Orlando Fire Department in March of 2015 and this is hopefully where I will be for the next 15-20 years until I retire. Maybe then we can find our way back to Tennessee.”

As a firefighter, Propst has to continue to take classes and get new certifications to stay up to date on the latest information and new technology that they come out with for firefighters. Propst states that he enjoys learning new things and a lot of the courses are fun and engaging.

"I have taken many classes that I have earned certifications that were geared towards my job. Some of those certifications are rope technician, vehicle machinery rescue technician, trench technician, confined space technician, collapse technician, fire instructor, and fire officer. These classes were a lot of fun and I always learn a new way of doing something that can help me be more proficient at my job. I am also a paramedic, which was the most difficult year of school for me. Any way I can help someone in their time of need is what being a firefighter means to me. I really do love helping people."

The COVID-19 pandemic has hit Florida hard since the beginning of March with over 114,000 positive cases and 3,300 deaths. Florida was one of the first places to reopen its beaches in April but quickly changed that after a spike in cases.

“At first our call volume did drop off a bit. People were scared to go out of their homes and most of the areas only essential people were supposed to be out. We were and still are treating almost all of our patients and people we encounter as being positive for COVID-19.”

“We are wearing a lot more PPE on calls than we normally have in the past. Getting sick or hurt at work is always a possibility and we try our best to find ways to make our job safer. The real scary part to me is that I could get infected and not know it in time before I go home to my family and possibly get them sick as well.”

“There are many people and companies helping and donating to people in need right now. I have heard about people making masks, companies donating masks, and hand sanitizer. These are very different and tough times for a lot of people. Hopefully, we can get through this soon.”

When Propst is not at work, he likes to spend time with his family and his dogs, but with everything going on it has been difficult for him. Recently his station has been exposed to the virus and it has kept him at work longer.

“I am currently on my third 24-hour shift in a row and tomorrow I am working another shift as well. 96 hours in a row being away from my family is very tough. This is because a large number of our members have recently infected and many others were around these members. A lot of firefighters in this department have been quarantined over the past few weeks. This is voluntary still and there are plenty of firefighters doing the same as I am too. Hopefully, this is the worst of it and all of them come back soon healthy.”

“I have been married to my beautiful wife Meggan Propst since November 11, 2017. We always dreamed about having kids and our dream came true on August 9, 2018, when Tucker Propst was born. He is so much fun. Every time I talk to him on FaceTime when I’m at work, he loves to look at the fire trucks.  We also have two dogs, Toby and Chloe. The three of them play all day together.”

“I have been very blessed with all of the wonderful people in my life. My wife and son mean everything to me and I’m trying to be the best husband and father that I can be. I have my dream job and have always loved coming to work.”

“I would not trade my time and experiences that I got at Cumberland University for anything. Those two seasons were a lot of fun. I met a lot of wonderful people. I really miss Lebanon and Whit’s sweet tea,” Propst said. 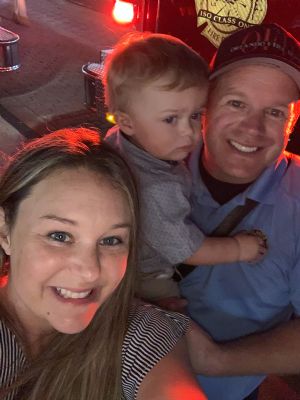 Courtney and his wife Meggan and son Tucker.

Cumberland University Athletics would like to thank Courtney Propst for his 11 years of service as a firefighter and a paramedic. He has served Cumberland proudly.

For more Healthcare Hero Spotlights return on Fridays to check out another former Cumberland student-athletes story.