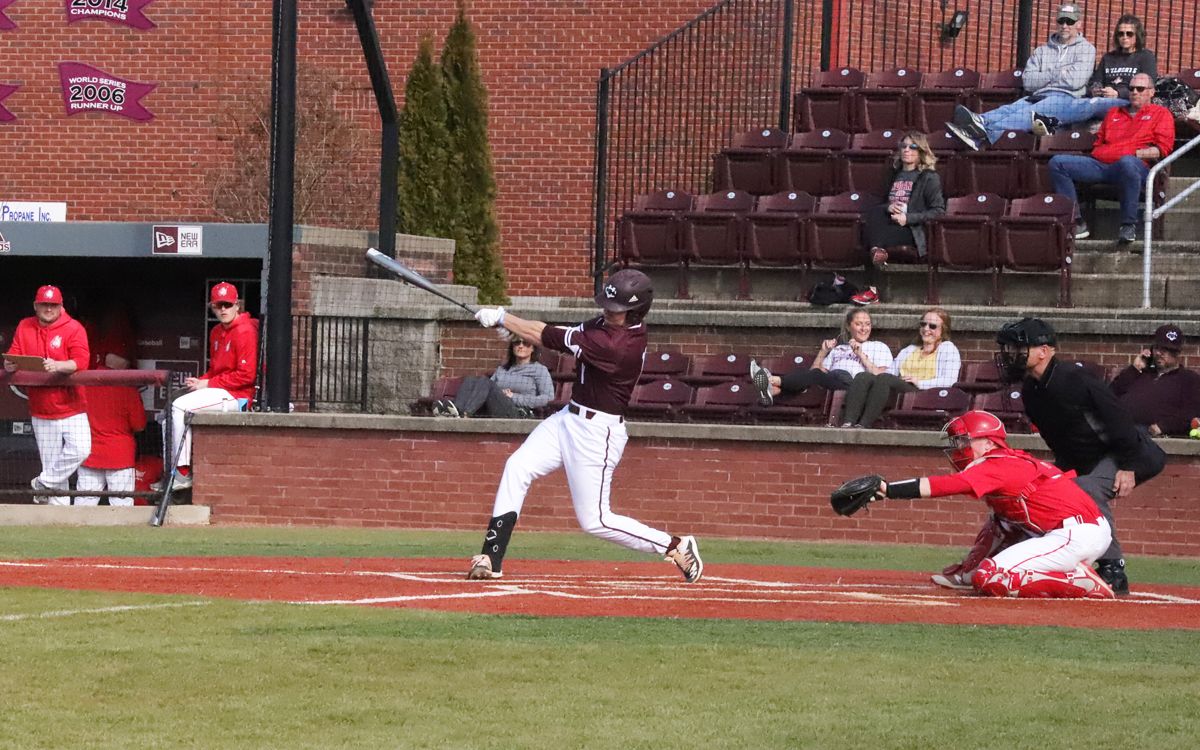 WALEKSI, Ga.--Cumberland baseball suffered a 7-4 loss in the opener, but bounced back to take game two off a gutsy pitching performance by Jordan Burdette and timely hitting.

Cumberland pitching struggled to find the strikezone in game one surrendering 12 walks as a team that led to seven Reinhardt runs while the Eagles only managed three hits over nine innings. Hooper Mills got the ball for the Phoenix and game one, but struggled to find the strikezone issuing six walks and four runs in just 3 1/3 innings. Mills turned it over to Wyatt Blessing who managed to escape the dreaded big inning, but also allowed three walks in just 2/3 inning.

Seth Wyse entered in the fifth inning and kept Cumberland in it by only giving up two runs, but Wyse did not allow a hit over 3 2/3 and punched out three batters.

Mills started of the first inning by drilling Reinhardt's Nick Sanders and walking two batters to load the bases, but was able to escape the jam by punching out Devin Symler.

After settling in a bit, Mills walked the first two batters to open up the fourth frame before Albert Mora hit a 3-run home run to left to break the scorless tie. Mills issued two more walks before getting pulled for Blessing. He walked the first batter he saw opening the door for Sanders who hit a 2-RBI double down the line to give the Eagles a 5-0 lead.

Cumberland was able to get one run back after Joey Fregosi led off the inning with a single. A couple of batters later Tyler Jones hit single moving Fregosi up a bag. Fregosi was able to steal third allowing Chandler Hughes to hit a sacrifice fly to center.

Wyse replaced Blessing in the 6th and walked his first batter. Smyler was able to advance to second on a balk call and swiped third before scoring on a safety squeeze play to add to Reinhardt's lead, 6-1.

Cumberland chipped at the lead in the seventh, Jose Vera and Tyler Jones led the inning off with back-to-back singles. Two batters later, Martinez hit a single to bring Vera home. Tyler Stokes drew a walk to load the bases and Pablo Custodio delivered a 2-RBI single to left field to make it a 6-4 game.

Fregosi led the eighth off with a triple down the left field line setting up CU to cut it even closer, but Reinhardt's Parker Miller slamed the door shut with two puch outs and a fly ball to escape the threat. After the Eagles added one more run in the bottom half of the inning, Miller retired Cumberland in four batters to give Reinhardt the 7-4 victory.

In game two, Cumberland scored in five of the seven frames with timely hitting. Daniel Alvarez got the ball to start the game and Reinhardt jumped up early. Alvarez walked the first batter of the game and Sanders hit his second double of the day. Profit scored on a wild pitch and Sanders scored off a Jarrett Burney single.

Cumberland cut the deficit in half after Fregosi hit a double to start the inning and Jones drove him home, but that was all Cumberland could manage in the inning. Reinhardt answered with another two runs off of three hits to put Reinhardt up 4-1 after two.

Chandler Hughes started the third off with an infield single. He would eventually come around to score from a groundout by Stokes.

Jordan Burdette came on to pitch in the third, he allowed one run in his first inning after a double, a groundball to advance the runner to third and a sac fly.

Fregosi continued to swing a hot bat singling to led off the fourth. Jones again followed with a big double to put runners on second and thrid and allow Jose Vera to push the run across with a ground out, Reinhardt led 5-3 after four innings.

Cumberland's big inning came in the fifth, Custodio singled and Mykel Gordon walked. Tyler Jones was intentionally walked to load the bases with two outs and Vera delivered with a single up the middle. The ball squeaked under the glove of the centerfielder and allowed all three runners to come around to score giving Cumberland their first lead of the day, 6-5.

Burdette made the Reinhardt offense go quietly inducing an inning-ending doubleplay and Andrew Martinez cranked his first homerun of the season to deep right center.

The Eagles made it interesting in the last frame, leading off with a double, a single, and after a flyout, Burdette drilled a batter to load the bases. Burdette induced a flyball and then a groundball that would have ended the game was bobbled and allowed a run to score. It didn't faze Burdette as he was able to strike the next batter out to get the win.

Tomorrow's rubber match will be played at 9:00 am CST. The game was moved up to try to miss the rain coming into Waleski.