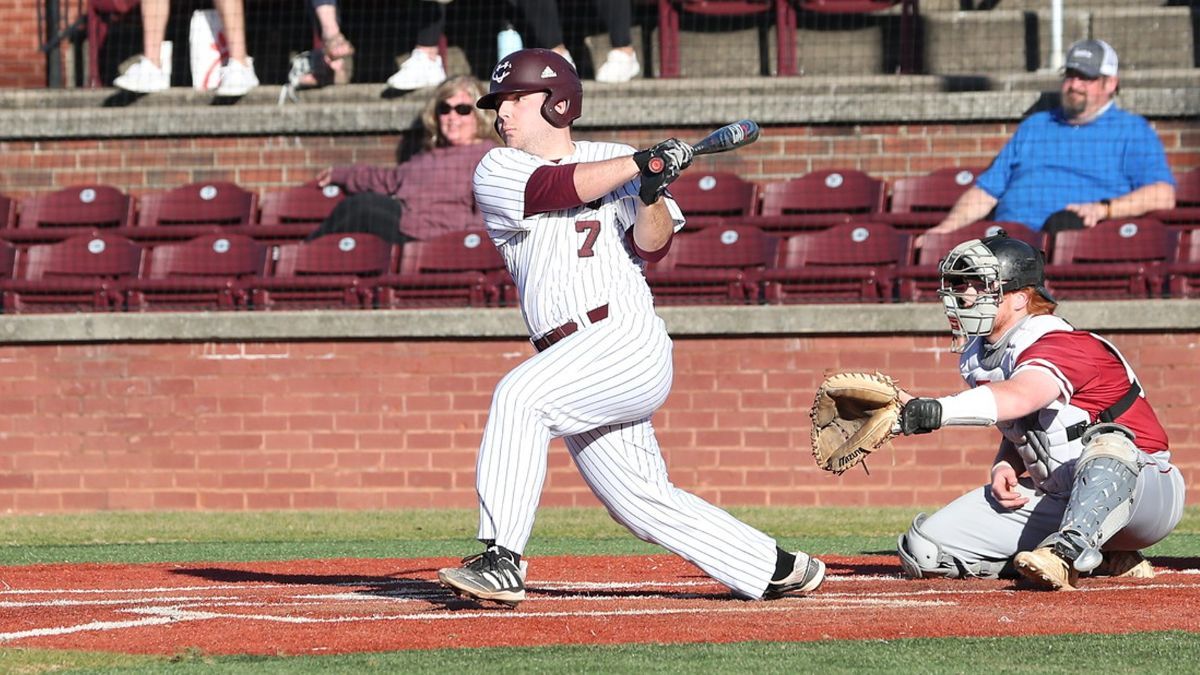 LEBANON, Tenn.-- Tyler Stokes hits a go-ahead home run in the seventh inning and Nolan Gazouski extended the lead with a two-out RBI double allowing Nick Hoefling to close the game with a six-out save to win 9-8 over No. 17 Reinhardt.

Kaleb Vaughn received his first career start on the mound and tossed well giving up five runs, four earned over 5.1 innings. The freshman spread out six hits and struck out three batters. Brad Smith closed out the sixth inning to get Vaughn out of a jam before Zavien Lindsey threw the seventh. Lindsey gave up two runs on two hits to tie the game but was able to get the win after CU took the lead in the bottom of the seventh. Hoefling posted his first career save getting the final six outs of the game striking out two batters.

Reinhardt got on the board first after Nick Sanders drew a walk Gianmarco Marcelletti hit a home run to left field in the first inning. Reinhardt starter Nate Richardson kept the Cumberland batters at bay before their second time through the lineup when the Phoenix exploded for six runs in the fourth inning.

Custodio crushed a line-drive home run to left field to put things in motion for Cumberland. Tyler Jones followed with a single and Shelton hit a double in the left-center gap. Gazouski drew a walk to load the bases and Josh Morgan was hit by a pitch to bring in a run ending Richardson's day.

Chandler Gant replaced Richardson with one-out and the bags full and gave up a bases-clearing triple to Andrew Martinez, his first batter faced. Brett Bello executed the safety squeeze to plate Martnez and close the six-run inning. CU lead 6-2 going to the fifth.

The Eagles cut into the lead in the sixth as Dalton Turnbow led off the inning with a base hit and advanced to third on an Albert Mora single to right-center. Xavier Arnette hit a tailor-made double-play ball, but shortstop Joey Fregosi threw it away allowing Arnetter to advance to second and score Turnbow. Drew Symler singled in Arnette and Keven Jimenez hit a sac-fly to score pinch-runner Jacob Profit to make it 6-5.

Cumberland got one run back in the sixth as Shelton led off the inning with his second double of the game. Gazouski and Morgan both drew free passes to load the bases and Martinez hit a sacrifice fly to left field to bring Shelton home and make it 7-5 after six complete innings.

Marcelletti led the seventh inning off with a double down the left-field line and moved up 90 feet on a wild pitch. Turnbow hit a deep flyball to centerfield to bring in Marcelletti. Arnette drew a two-out walk from Zavien Lindsey and catcher Andres Ugarte hit a double to score Arnette from first base and tie the game.

Kevin Ross checked in for Reinhardt in the seventh on the mound and Stokes greeted him with his 18th home run of the season to take the lead. after Custodio and Jones each recorded outs Shelton hit a rope up the middle for his fourth hit of the day. Pinch-runner Reid Bass moved up to second base on a wild pitch and scored on Gazouski's double to right-center field.

Hoefling tossed the final six outs giving up a solo home run in the eight to Jarrett Burney. In the ninth, Reinhardt tried to ties things as Albert Mora and Jacob Profit drew back-to-back one-out walks. Perhaps the biggest play of the game, the two Eagles base runners attempted a double steal to put the tying run on third base and the go-ahead run on second, but Custodio threw out Arnette at third base for the second out and Ugarte flew out to right to end the game.

The Phoenix will play their final conference weekend this season against Bethel this Friday and Saturday in Coach Hunt's final home series. Tickets are available at www.gocumberlandathletics.com/tickets.