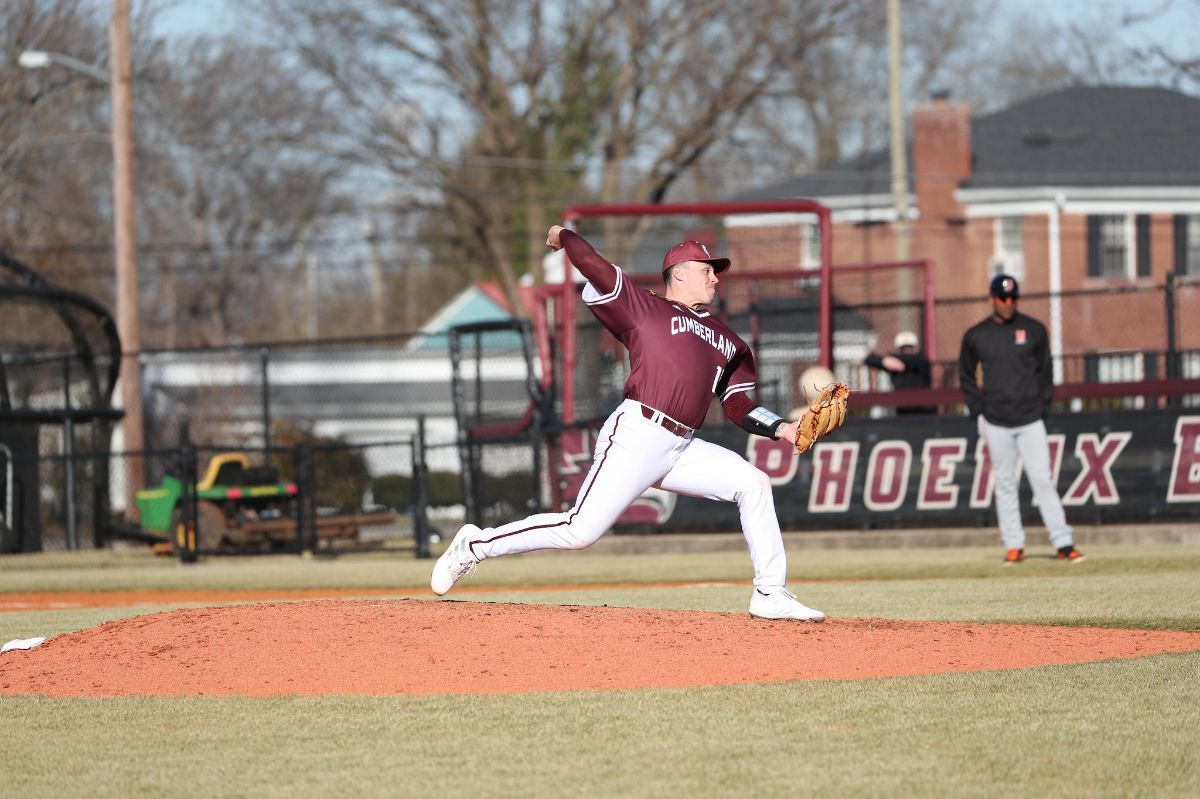 STERLINGTON, La.-- Cumberland baseball splits their games on day two of the Cajun Collision to go 1-3 on the weekend.

Cumberland (2-10) was not able to get the bats rolling in day two of the Cajun Collision only tallying four total hits on the day, two of which came off the bat of Tyner Hughes. Cumberland hitters walked a total of 13 times and Phoenix pitchers recorded 16 strikeouts.

A dominant outing from right handed pitcher Trevor Muzzi helped Cumberland seal the 1-0 win over the Bulldogs. Muzzi threw a complete game shutout tallying 11 strikeouts and only allowing three hits in the contest. Cole Turney and Hughes picked up the only two hits in the game with both coming in the third inning.

Muzzi got the game rolling by striking out the side in the first frame of the game. Cumberland had back to back walks to begin the bottom half of the first and followed it up with a double steal giving them runners on second and third with no outs. Unfortunately the Phoenix were unable to do anything with it as the next three batters went down in order.

Cumberland finally struck first in the bottom half of the third after a single and a stolen base by Hughes brought up Turney for an RBI opportunity. Turney hit a routine fly ball into left field that was pushed towards the line by the wind falling for an RBI double giving Cumberland a 1-0 lead.

Pitching and defense continued to dominate from that point on as Muzzi struck out five more batters closing the door on any comeback from the Bulldogs.

University of Science & Arts of Oklahoma

Daniel Alvarez got the ball in game two of the day throwing four complete innings allowing two runs on six hits while collecting two strikeouts. Jack Webb threw one inning in relief for the Phoenix striking out two and allowing one run on two hits. Rance Pittman threw the final inning for Cumberland shutting down the Drovers offense while striking out one hitter.

The Drovers got on the board early in the bottom of the first after a lead off single brought up Luis Pelayo to the plate. Pelayo hit a double to left center field, bringing home Gaunt from first. Mendoza tried to back-pick Pelayo at second base but his throw deflected off the glove of Tyler Stokes and into center field advancing him to third. Pena hit a sacrifice fly to left field bringing the score to 2-0.

The Phoenix answered quickly after three two-out walks in a row led them to a bases-loaded hit by pitch to bring home a run, cutting the lead down to 2-1.

Alvarez settled in on the mound after a rough first inning cruising through innings two through four.

Freebies continued to lead the way for the Phoenix when two more walks set up an RBI single for Hughes. Unfortunately the Phoenix left a pair of runners stranded before they could make the damage worse.

Webb went on to pitch in relief for Alvarez in the fifth inning shutting down the side in order. Webb came back out for the bottom of the sixth.

A slow chopped single to third got the Drovers started in the bottom of the sixth inning before a walk put two runners on. A passed ball advanced both runners up a bag and a single from Peyton McDowall drove in a run giving them a 3-2 lead with two runners on with no outs. This forced another pitching change to right handed pitcher Rance Pittman. Pittman was able to work the Phoenix out of trouble without allowing another run to cross in the inning holding the Drovers to a 3-2 lead heading into the seventh.

Hagen Earls went in to pitch for Science & Arts in the top of the seventh and shut the Phoenix down in order to pick up the save helping the Drovers win 3-2.

Cumberland will be back in action at home Monday, February 14 as they take on the #7 ranked IU-Southeast.