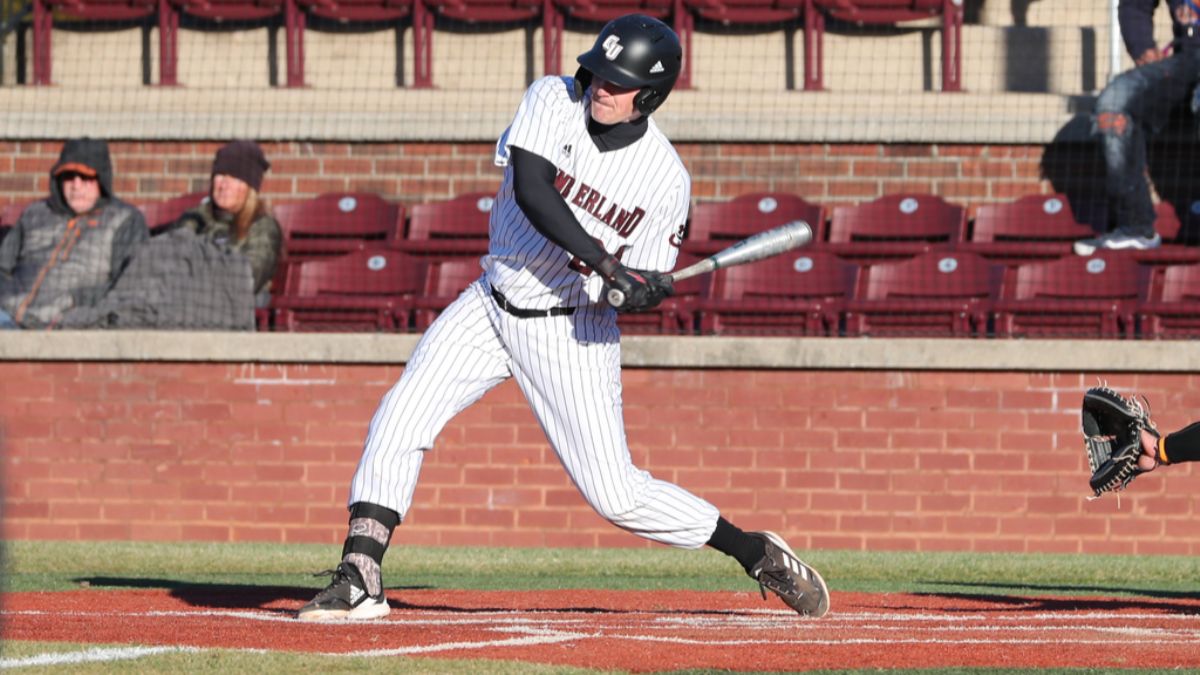 Cumberland baseball split the day one of the doubleheader with a 8-0 loss in game one and 4-1 win in game two at Ernest L. Stockton Field Woody Hunt Stadium Saturday afternoon.

Cumberland (4-12) could only muster one hit in the first game and five errors compiled to eight runs for the Pride.

Tyson Taylor tossed 4.1 innings striking out six and walking six, but picked up his first win of the season. Isaac Rhode threw the final 2.2 innings without allowing a hit and striking out four.

In the bottom of the first, Cumberland threatened with a two-out walk, a Nolan Machibroda single, and an Angel Mendoza walk to load the bases. Santrell Farmer laced a line drive to right-center that Greg Bennett laid out to save at least two runs and keep it scoreless.

Jayden Hanna drew a leadoff walk in the second and Tyner Hughes drew a walk to put two on, but a strike out left two more runners on base.

In the third, the Pride got to Eigenhuis as he issued a walk to Victor Lara and then hit Darius Bradley with a pitch to put two on. After both runners moved up to second and third, Bubba Thompson hit a two-out two RBI single to put Clarke up 2-0.

The Pride added a run in the fourth off a sacrifice fly by Hayden Siebers ending Eigenhuis day after the inning.

Ian Schilling came in to pitch and tossed 2.2 innings and gave up four hits and five runs only one run was earned as the Phoenix made four errors in the final six outs allowing Clarke to get up 8-0 for the win.

Game two was a different story as Cumberland put up 10 hits and cleaned up the errors to get a 4-1 victory.

Trevor Muzzi (2-2) picked up the win tossing three innings giving up one run on three hits. Mitch Rogers bridged the middle innings throwing three hitless innings striking two batters out. Rance Pittman closed it for the first save on the season for Cumberland.

In the first, Clarke put one on the board with an RBI single. The Phoenix answered with a run of their own in the bottom half, Farmer lead off with a triple and Hann drove him in with an RBI single to tie the game at 1-1.

In the third, Farmer led off the inning with a single and moved up on a sacrifice bunt. Hughes was hit by a pitch and Cole Turney drove in Farmer with a single to right advancing Hughes to third. Machibroda on the next at-bat hit a sacrifice fly to center field to put Cumberland up 3-1 after three innings.

Hanna and Hughes led off the fifth with back-to-back singles, but Turney grounded out into a double play, but it moved Hanna to third. Machibroda drove him in with his third hit of the day to extend it to 4-1.

Clarke threatened in the final frame, but Pittman slammed the door shut giving Cumberland the win.

The rubber match will be played tomorrow at 11:00 a.m.