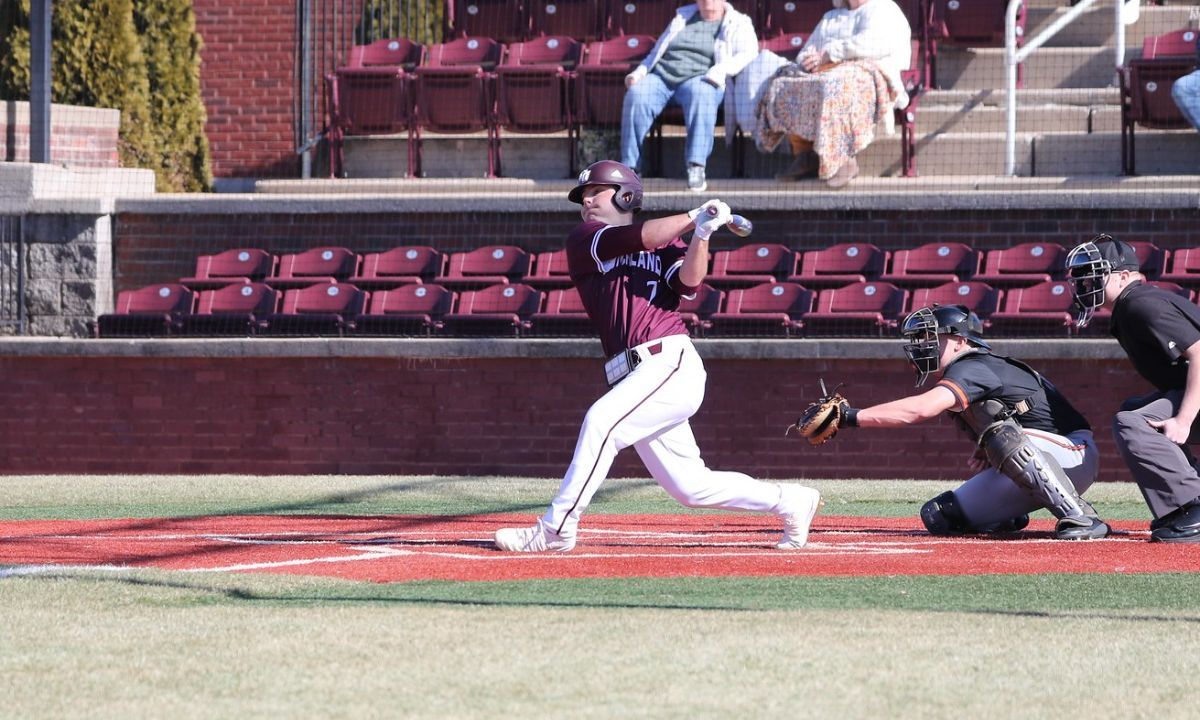 Ethan Shelton recorded three hits in the win over the University of the Cumberlands. (Credit: Bob Tamboli)
Cumberlands at Cumberland | March 11, 2022

LEBANON, Tenn.-- Cumberland baseball put up a five-spot in the bottom of the eighth inning to come back and win 5-2 over the #17 University of the Cumberlands.

Cumberland (12-15, 6-2 MSC) looked great defensively in the game, turning three double plays without an error in the field.

Cole Eigenhuis got the start on the hill, pitching 7.2 innings allowing two runs, and striking out five. Eigenhuis did a great job working himself out of trouble the whole game. Daniel Alvarez came in relief in the eighth inning and did not allow a single run, closing the door on the Patriots.

Ethan Shelton led the way for the Phoenix at the plate collecting three hits with one RBI. Nolan Machibroda had a team-high two RBI's and Tyner Hughes picked up two hits.

The Patriots struck first in the top of the second after a walk and a single put two runners on to start the inning. Seth Benner came up to the plate next and hit a two-run triple down the right-field line to make it a 2-0 Cumberlands lead. Eigenhuis picked up a big strikeout followed up by an inning-ending double play to leave Benner stranded at third.

Both pitchers cruised after the second by not allowing a single run to cross the plate on either side up until the bottom of the eighth.

Jayden Hanna led off the bottom of the eighth with a single and Cole Turney walked to put two runners on. Hughes came up next and singled to center field to load the bases with no outs in the inning. Machibroda walked up to the plate next and sent a rocket down the right-field line for a two-run double to put the Phoenix on the board and tie the game 2-2. Three batters later, Shelton singled to center field to bring home a run and Nathan Vaughn grounded out to second base for the fourth run of the inning. Santrel Farmer stepped into the box with two outs and two on when he singled to right field bringing home another Phoenix run. Unfortunately, Shelton was thrown out at the plate on the play but not before Cumberland took a 5-2 lead into the ninth inning.

The Patriots led off the inning with a single but Alvarez quickly erased the runner with a 4-6-3 ground ball double play to get two quick outs. The next two batters singled for the Patriots but Alvarez forced a fly out to give the Phoenix a 5-2 win in the game and a 2-1 win in the series.

This was Cumberland's first series win against a ranked opponent since the 2016-17 season when they beat #8 Georgia Gwinnett in a series at home 2-1.

Cumberland will be back at home Tuesday, March 15 to take on Bryan College.