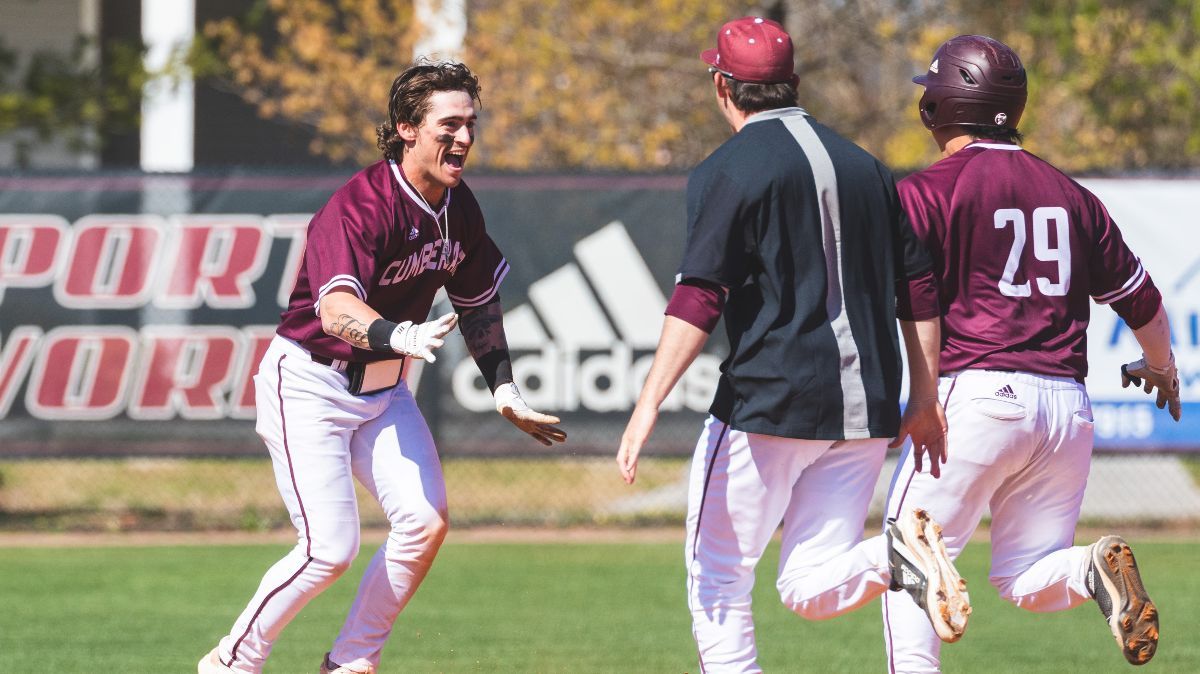 LEBANON, Tenn.--Cumberland baseball scored eight runs in the seventh inning to come back and walk-off Campbellsville and then trailed 5-0 in game two, but came from behind to sweep Campbellsville with a 16-5 win in game three.

Cumberland (16-15, 9-2 MSC) has broken the .500 mark for the first time this season after starting the year 1-11. Cumeberland had a dominant offensive showing scoring 46 runs this series.

In the first game, Cumberland trailed 10-3 heading into the ninth and rattled off eight runs to get the walk-off win. Santrell Farmer and Nolan Machibroada led off the inning with walks and Tyler Stokes singled up the middle to load the bases. Ethan Shelton hit a two-run double to spin the bases around and then Stokes scored on a wild pitch to cut it to 10-6.

Nathan Vaughn singled up the middle to bring Shelton home. Pinch-hitter Jacob Dukart drew a walk to push runners to first and second and Jayden Hanna roped a double down the line for a 10-8 deficit. Campbellsville issued an intentional pass to Cole Turney to bring up Farmer. He singled through the right side to tie the game at 10-10.

Machibroda was given the free walk as well to set up the force at home with Stokes up to the plate. Stokes hit a shot off the right-center field fence to walk it off winning 11-10.

Trevor Muzzi was cruising through the first three innings giving up just one hit in the first three frames, but ran into trouble in the fourth. Muzzi issued a lead off walk and two batters later Jacob White hit a home run to left field for the first runs of the game. The threat did not end there as Campbellsville reached on bunt single and then an error to put two runners on to set up a three run home run off the top of the right field fence by Grant McQuery. The Tigers led 5-0 after four innings.

Cumberland chased starter Brady Tedesco in the fifth inning and finally pushed across some runs. Jayden Hanna was hit by a pitch and Cole Turney followed that with a single up the middle. Farmer beat out a double play ball to keep the inning alive allowing Nolan Machibroda to hit a two-out three run home run to cut the lead to 5-3 after five innings.

Cameron Castaneda hit a two-out home run in the sixth to get on run back and then Campbellsville tacked on four runs in the seventh before Cumberland mounted the comeback.

Will Graves picked up his first win of his career.

Campbellsville jumped ahead in the second game of the doubleheader scoring three in the third inning highlighted by a two-run double by Jorge Gonzalez and added two more runs in the third to jump up 5-0.

In the bottom of the third, Hanna and Turney led off the inning with back-to-back singles. Machibroda moved them up a base with a groundout and Farmer brought in Hanna with a 5-3 groundout. Mendoza laced a triple off the right-center field fence to score Turney and Shelton hit a two-run bomb to cut it to 5-4.

Hanna led off the fourth with a routine ground ball to short, but an errant throw went all the way down the fence and Hanna hustled all the way around to score to tie the game at 5-5. Turney was hit with the next pitch and Machibroda hit a line drive two-run home run to the opposite field to give Cumberland a 7-5 lead.

The Phoenix added six more runs in the fifth as Dylan Forbes singled home Jacob Dukart. Turney hit a huge three run home run to right. Mendoza and Dukart singled in a run for the fifth and sixth runs of the inning.

Cumberland tacked on three more in the sixth and held the lead in the seventh for the run rule. The Phoenix scored 16 unanswered runs in the win.

Cole Eigenhuis started on the mound for Cumberland and only went 2.0 innings giving up five runs, two earned, on four hits. Ethan Torres threw the next five innings out of relief holding the Tigers scoreless to get his first win of the season.

Cumberland will have to turn around and take on Faulkner tomorrow at home at 2:00 p.m. Faulkner comes in winning six straight games including wins over #2 Tennessee Wesleyan and an extra-inning win over #5 Georgia Gwinnett