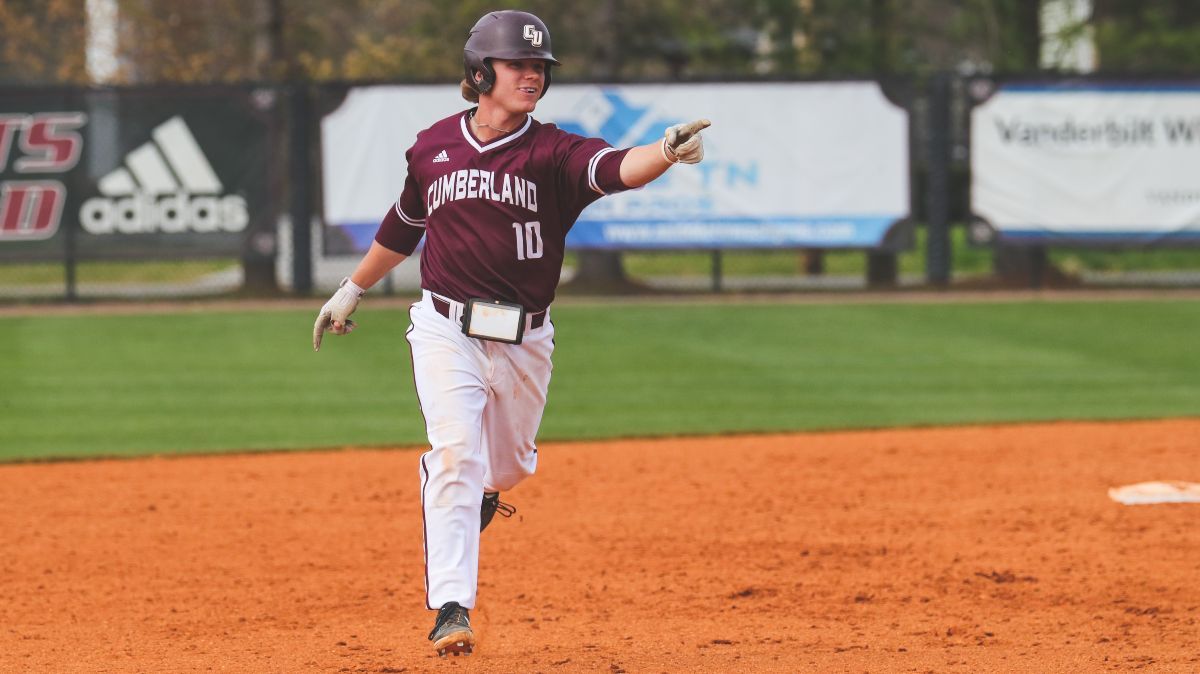 LEBANON, Tenn.-- Cumberland Baseball sweeps the No. 20 Freed-Hardeman Lions in their doubleheader to take the weekend series 2-1. The Phoenix hold a 17-3 record over their last 20 games.

Cumberland got on the board early in the first game, as Tyner Hughes hit a two-run home run over the left-field wall to put the Phoenix up 2-0. The home run marked his second of the series against Freed.

Hughes wasn't done there as his next at-bat he hit a double to right-center that brought in Santrel Farmer to push the CU lead to 3-0 in the bottom of the third. The next Phoenix run came in the bottom of the sixth when Ethan Shelton stepped up to the plate with no one on and launched a solo home run over the right-field wall.

The Lions scored their only run of the game in the bottom of the seventh when an overthrow back to home plate brought Rooklin for an unearned run.

The story of the game was Phoenix pitcher Trevor Muzzi as he recorded a complete-game victory over the Lions. Muzzi gave up only five hits, and no earned runs over 27 batters faced. Muzzi improves his record to 3-3 on the season. Duskin earns the loss for the Lions moving his record to 4-2 on the year as he pitched all six innings.

Both Tyler Stokes and Tyner Hughes had two-hit games for the Phoenix. Hughes had three RBIs in the contest, two of which came on the home run in the first inning to put CU up early. Santrel Farmer, Jayden Hanna, and Ethan Shelton also recorded a hit in the effort with Shelton's being a home run.

William Kelley of Freed broke the seal on the game in the top of the fourth when he hit a two-run homer over the right-center field.

Cumberland had an answer in the bottom of the inning with two outs as Santrel Farmer hit an RBI single into center, bringing home Chewy Sanders. With two runners on, Jayden Hanna came up to bat and hit a two-RBI double to left-center field that brought home Farmer and Vaughn to give the Phoenix a 3-2 lead.

Disaster struck in the top of the fifth when a pitch got passed catcher Brett Bello, bringing home Sean Rooney to tie up the game for Freed 3-3.

From that point on, the game was all Cumberland. A two-run home run by Jayden Hanna over the trees in right field gave the Phoenix a 5-3 lead after the bottom of the sixth.

The Phoenix continued to pour on the offense in the bottom of the seventh as Ethan Shelton hit a single through the left side that brought in Nolan Machibroda to give CU a 6-3 advantage. Angel Mendoza did the same singling down the third-base line to bring in Tyler Stokes to close out the inning with a 7-3 advantage.

Hanna put the cherry on top in the bottom of the eighth with his second home run of the game out right-center field to push the Phoenix lead to 8-3. Cumberland closed out the game in the top of the ninth with a beautiful pick-off by catcher Angel Mendoza to first base to tag Presley for the final out.

Ethan Torres is credited with the win, his third of the year, after pitching the final four innings in relief while striking out four Freed batters. Daniel Alvarez started the game and pitched 4.1 innings, giving up two earned runs and striking out five batters.

Jayden Hanna had his best performance of the year from the plate, going four-for-five with two home runs, five RBIs, and two runs scored. Santrel Farmer and Nolan Machibroda tallied the other multi-hit games with two hits apiece. Angel Mendoza, Nathan Vaughn, Ethan Shelton, and Tyler Stokes each recorded a hit for the Phoenix.

The red hot Phoenix are back at home on Tuesday with a doubleheader against Lyon College with the first game starting at 1 p.m.