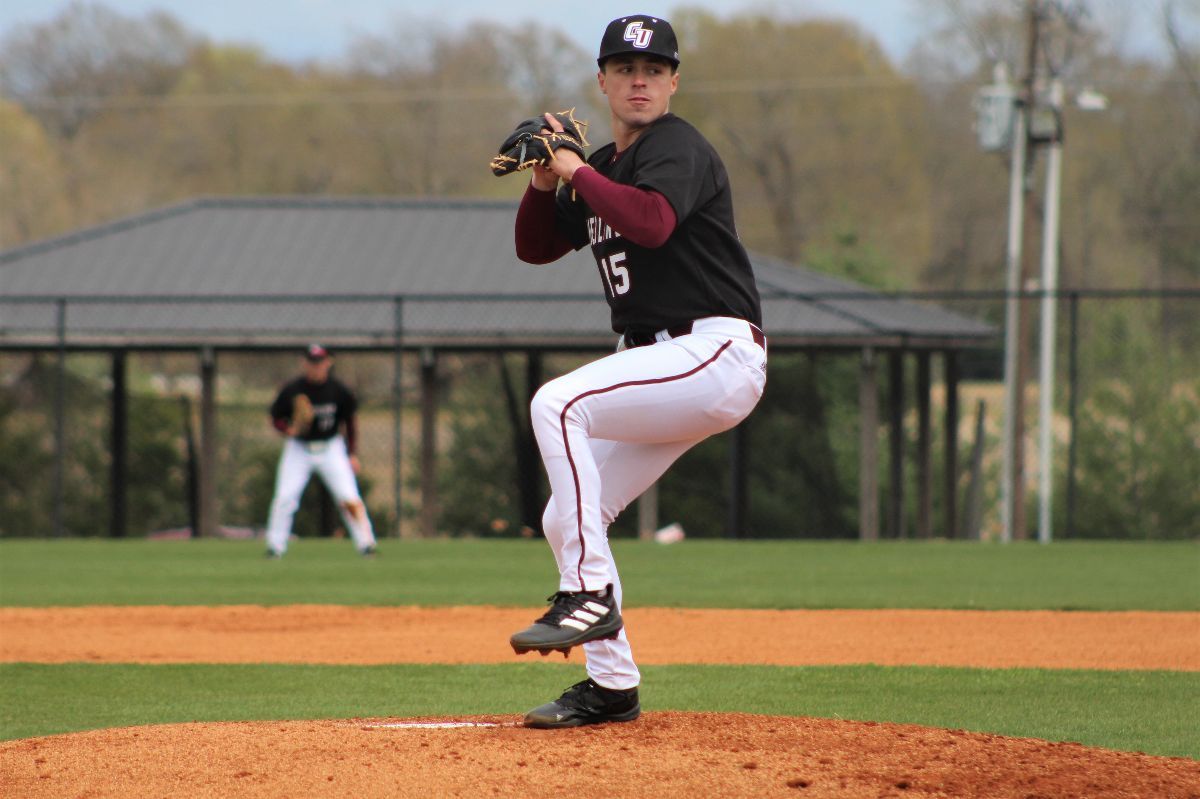 MCKENZIE, Tenn.--Trevor Muzzi threw seven strong to get the win on the mound and Ethan Torres picked up the six-out save to help Cumberland get the 5-4 win at Wildcat Park Friday afternoon.

It was a tough day to play baseball as it was cold and sloppy. Hits for both teams were at a premium as there were just 13 combined and seven errors between the two squads.

Cumberland (23-16, 12-3 MSC) pushed across four runs that reached via a walk or a hit by a pitch with timely hitting and situational baserunning to do enough to get the win. Jayden Hanna had two hits and scored a run. Nolan Machibroda posted two knocks and an RBI. Tyler Stokes scored two runs and Ethan Shelton had a hit and an RBI.

Muzzi (4-3) threw seven innings allowing just two runs on five hits while striking out four. He also issued three walks on the day. Ethan Torres struck out four in two innings of work to get the six-out save. Torres allowed two runs in the ninth, but had a big punch out with the tying run in scoring position to end the game.

Cumberland was on the board first scoring two runs in the second inning. Stokes drew a leadoff walk and Angel Mendoza was hit with a pitch for two one with no outs. Shelton drove in Stokes with a line-drive single to left-center for the first run of the game. Shelton was caught stealing making room for Santrel Farmer to reach base on a hit by a pitch as well. With runners on the corners and two outs, Farmer swiped second base, the throw went through to second to allow courtesy runner Chewy Sanders to walk home for a 2-0 lead.

The Wildcats chipped away at the lead in the third as Wyatt McKee reached base on an error. JT Morgan was hit by a pitch moving McKee to second and Paden New singled him home to cut the score to 2-1.

In the fifth, Farmer drew a leadoff walk and moved to second on a failed pickoff attempt by Boren. Hanna moved Farmer to third base on a sacrifice bunt and Cole Turney drove him in with an RBI ground ball that allowed Turney to reach on an error.

Jose Olmeda hit a one-out triple in the seventh and came in to score on a fielder's choice for a 3-2 Phoenix lead.

Stokes led off the eighth inning with a walk and came in to score on an RBI error from Nathan Vaughn for a 4-2 lead.

In the ninth, Hanna doubled and advanced to third on a wild pitch, but Bethel got two big groundouts that held Hanna at third. Machibroda delivered a clutch two-out single to score Hanna which turned out to be the winning run.

Torres allowed the bases to get loaded in the bottom of the ninth and JT Morgan posted a two-out, two-run RBI single, but Torres slammed the door shut with a strikeout to end the game, 5-4.

The series will continue tomorrow with a doubleheader scheduled to start at noon central time.