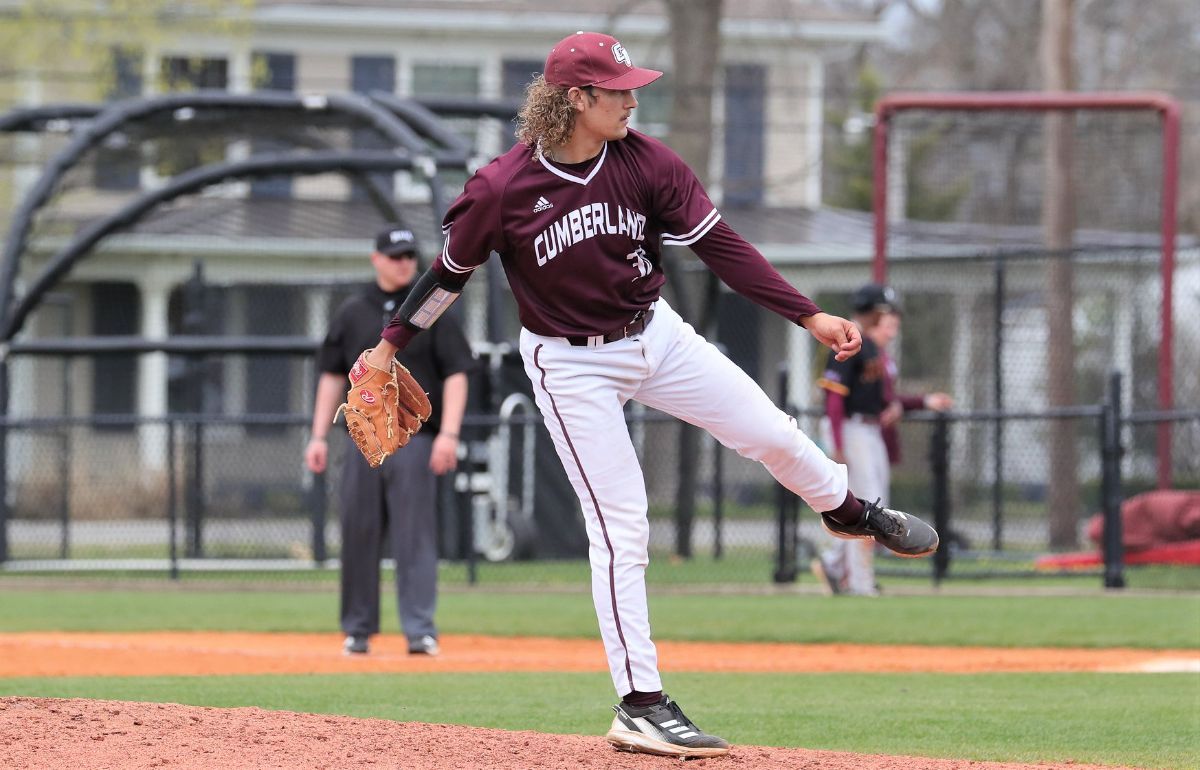 Ethan Torres picked up his fourth save of the year recording the last seven outs for Cumberland. (Credit: Steve Wampler)
Cumberland at Thomas More | April 30, 2022

CRESTVIEW HILLS, Ky.--The Cumberland bullpen holds off a scrappy Thomas More team, 5-4, to win the Mid-South Conference Opening Round series and advance to the final site of the Championships in Bowling Green, Ky.

No. 10-seed Cumberland upset the 3-seed Thomas More, helped by 4.2 innings on the mound by Ian Schilling and Ethan Torres in relief. Schilling came on and induced an inning-ending double play and Torres picked up a seven-out save for his fourth this season.

A few timely hits by the Phoenix helped push them over the top. Senior shortstop Nathan Vaughn delivered the game-winning hit on an RBI single in the seventh.

Santrel Farmer picked up three hits while Chewy Sanders, Tyner Hughes, Nolan Machibroda, Vaughn, and Tyler Stokes each had two hits apiece. Stokes hit a solo home run in the fourth inning. The Phoenix left 16 runners on base, but the Phoenix arms picked up the slack to hold on for the win.

The Saints struck first in the bottom of the first inning. Derek Atwood hit a double in the gap to put runners on first and second allowing Jacob Caruso to hit a two-RBI single for an early 2-0 lead.

With two outs in the second, a defensive miscue by Aiden Reverman in center field on a ball hit from Jayden Hanna allowed Stokes to come in and score for the first Phoenix run. Hanna ended up on second base on the error. Sanders laced a ball through the left single allowing Hanna to score and Machibroda blooped an RBI single to left for a 3-2 lead.

In the fourth, Stokes blasted a 3-2 breaking ball for a solo home run, his 11th of the season, to extend the Phoenix lead.

Muzzi was pulled in the fifth inning after he gave up a solo shot to Brett Benzinger and issued a walk to the next batter, but Schilling induced an inning-ending double play ball to get out of a jam.

Angel Mendoza hit a one-out single in the seventh inning and Farmer singled to center, moving courtesy-runner Corey Perkins to second. Vaughn, down in the count 0-2, roped a single through the left side to score Perkins, which wound up being the game-winning run.

Gavin Pearson doubled in a run in the bottom half of the inning to keep the game close, 5-4, but Ethan Torres entered with two-outs in the seventh and shut down the Saints allowing just two runners to reach via the base on balls for the seven out save.

The Phoenix move on to the final site of the Mid-South Conference Championships in Bowling Green set to begin next Thurdsay. The remaining six teams will be reseeded in the double-elimination bracket. Check the website for updates on game times and opponents.