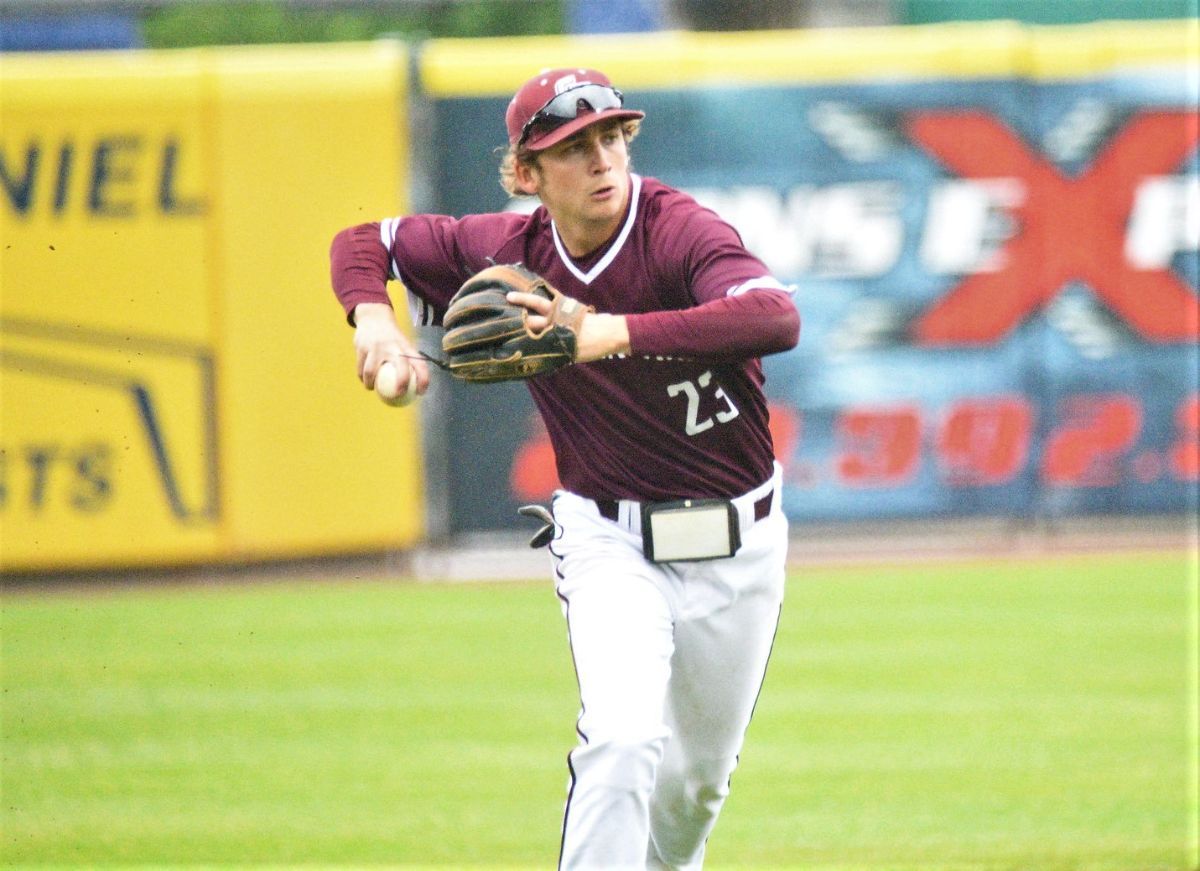 Nathan Vaughn fielding a slow roller and firing to first for an out against Bethel. (Credit: MSC Officials)
Cumberland at Bethel (TN) | May 07, 2022

BOWLING GREEN, Ky.--Cumberland holds off Bethel University to stay alive in the Mid-South Conference Baseball Championships with a 7-6 victory at Bowling Green Ballpark.

The Phoenix had timely hitting with two home runs to propel them over Bethel in the elimination game. Trevor Muzzi threw 5.2 innings in the win giving three runs, two earned, and striking out five. Ian Schilling came in and threw 1.1 innings giving up two runs and Rance Pittman recorded the save, his second of the year.

Jacob Boren was charged with the loss for Bethel after he could not get out of the third inning giving up four runs.

The Phoenix put a dent in the scoreboard in the first inning. Jayden Hanna led off the game with a hit by a pitch and Tyner Hughes roped a line-drive single to left-center. Machibroda doubled off tho right-center and Hughes was able to score all the way from first for a 2-0 lead.

In the bottom of the inning, Bethel small-balled in two runs to tie the game. Kendrick Osbourne and Ivan Vega hit back-to-back singles and Luis Aristud singled on a bunt that Hughes threw off the back of Aristud allowing Osbourne to score. A successful squeeze attempt brought Vega in to score and tie the game.

Chewy Sanders singled to lead off the third and Hughes hit a two-run blast to left field. The rally restarted as Bethel walked Machibroda, Farmer singled down the left-field line and Angel Mendoza was hit by a pitch. Bethel pulled their starter for Ryan White with the bases loaded and nobody out. White struck out the next two batters and induced an infield pop fly to get out of the inning without further damage.

The score stood at 4-2 until the top of the sixth when Hanna hit a solo home run off the scoreboard in right-center field. Sanders followed that by dropping a double in no man's land behind second base. He advanced to third on a fly ball out and scored on a throwing error by Aristud at shortstop for a 6-2 advantage.

Bethel pushed one across in the bottom of the sixth on more small ball plays after a walk and a single led off the inning. Bryan Catala hit a sacrifice bunt that Machibroda airmailed to Hanna at first allowing Rivers Moffet to score. Muzzi day came to an end after that and Ian Schilling checked in. Schilling walked the first batter he faced to load the bases but struck out Luis Aristud for no further damage in the inning.

Jacob Dukart pinch-hit to lead off the eighth and just missed his first home run of the season with a double off the top of the wall. He advanced to third on a deep fly out from Hanna. With the infield in, trying to cut off the run at home, Sanders hit a ground ball into the six-hole that he beat out at first for an infield single, but Dukart was held up at third sending Bethel to the bullpen again.

Schilling issued a walk and then a double by Wyatt McKee down the third-base line to end his outing with runners on second and third and no outs. Rance Pittman checked in and recorded a fly out his first batter faced. Vega hit an RBI groundout to score Catala and Aristud followed it with a two-out RBI-single to cut the deficit to 7-5.

After a scoreless ninth for Cumberland, Rivers Moffet led off the ninth with a solo home run, but Pittman locked in for two strikeouts and a groundout to end the game.

Cumberland will take on the winner of Campbellsville University and Georgetown College tonight at 7:30 p.m.