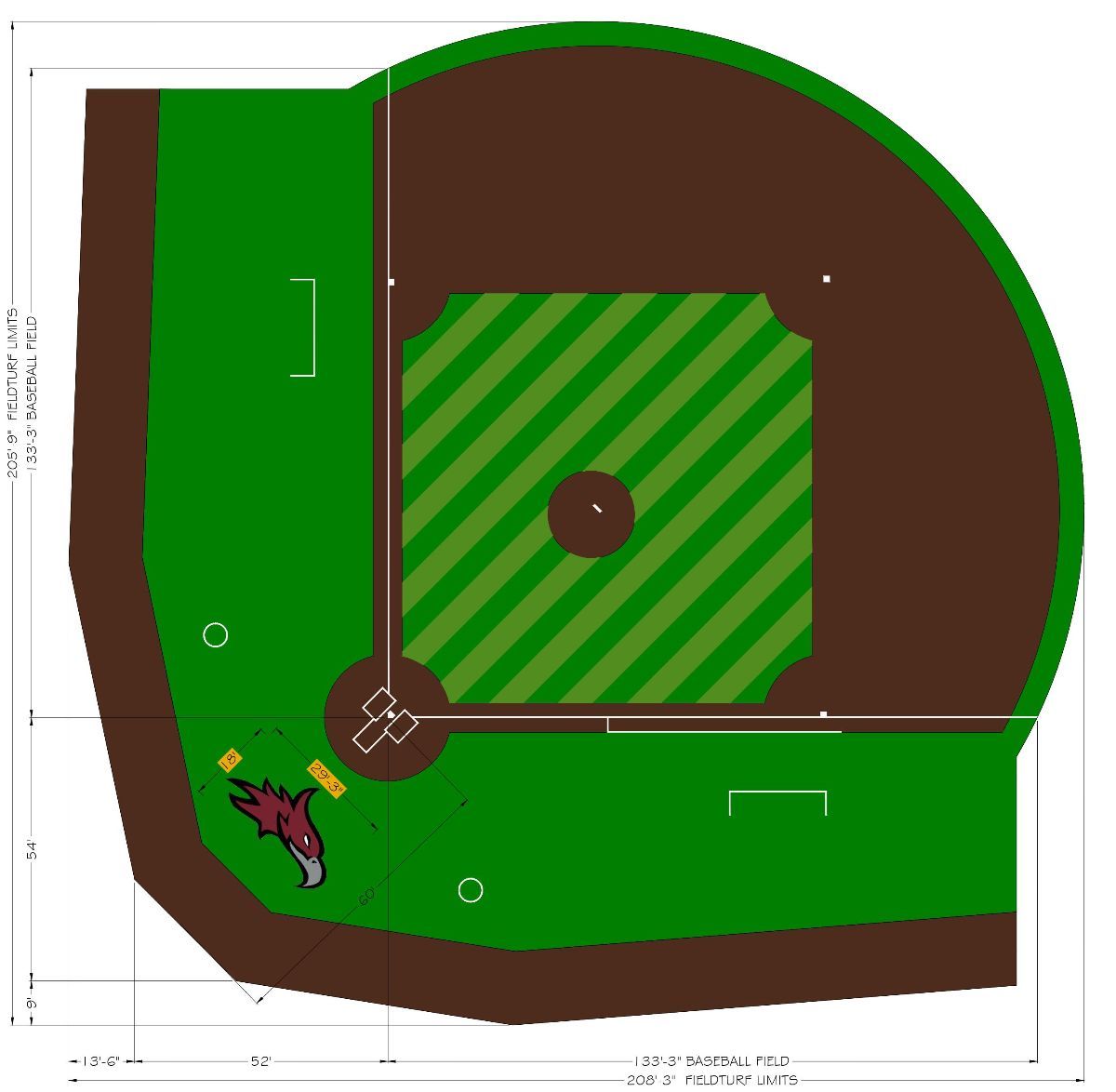 Renderings of the new infield turf provided by FieldTurf.

LEBANON, Tenn.— Cumberland University is pleased to announce plans to begin the transformation of Ernest L. Stockton Field at Woody Hunt Stadium to an artificial turf infield. The project will begin after fall practice in October with an expected completion date in time for the following spring season.

Middle Tennessee weather often brings challenges during baseball season. Prior to the start of the season, freezing winter weather often prevents access to a grass surface field with the  March and April month bringing an increase in spring showers. The turf will reduce some of the concerns and save time getting the field “game ready” allowing for more practice time and repetitions.

“This is another big facility upgrade for Cumberland Athletics,” Director of Athletics Ron Pavan said. “The infield turf will give our baseball team the opportunity to play despite any weather challenges. There have been some years where our team has not had the opportunity to get on the field before the season starts in February and the turf will help.”

Head baseball coach Ryan Hunt said, “Adding turf to our facility is going to be big for the program. It’s going to enhance every aspect from practices to games because now we don’t have to worry about weather as much.”

Both Hunt and Pavan noted the benefits of the turn in terms of recruiting efforts.”One of the best facilities at any level just got even better,” said Hunt.

Woody Hunt Stadium is currently equipped with all competitive state of the art amenities that a college baseball program could need. The stadium seats over 400 people comfortably after renovations in 2018. The Jeanette C. Rudy Clubhouse is home to the locker room and coaches offices. The Benton Jennings Hitting Facility is the teams indoor facility complete with batting cages, mounds, and a weight room. The baseball field has been manicured for decades to be one of the best playing surfaces in baseball and the turf will add to the already top-notch facility.

Additional renovations include upgrades to Home plate in order to improve the batter’s boxes and the mound will be converted to turf as well, a model that many programs around the country are transitioning to. The turf will decrease maintenance for both players and coaches when it comes to grooming the field and preparing the plate, mound and the infield which will allow more practice time for the Cumberland Phoenix. The turf will extend to the wall behind the plate and run past both dugouts down the lines.

Among the many generous supporters who donated to the turf project was Dan Crockett.

“I appreciate Dan’s donation to the Cumberland University Baseball program. He was a great former student-athlete at Lambuth University and a self-made business man that sponsored the Music City Bowl for 10 years,” Pavan said. “He understands small college athletics and our vision. His relationship with Coach Woody Hunt as an opposing player shows the impact and influence that Coach Hunt has on people.”

“The appreciation of sports and what they teach, that’s what matters. This is for Cumberland baseball,” Crockett said.

When Cumberland launched the turf infield campaign this past February, Hunt was overwhelmed with gratitude by the response the campaign received. “Thank you to all the alumni, supporters and friends of Cumberland Baseball who had a hand in helping us achieve this dream.”

Coach Hunt concluded the interview by reciting one of the most well-known quotes to come from his father’s time as the Head Coach of the Cumberland University baseball program, “Dreams are somewhat improbable but always possible.”

The turf project is one of the many dreams made possible by generous friends of Cumberland University.