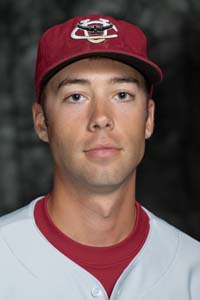 2011 (JUNIOR): Posted 1-0 record with 3.43 ERA in 21.0 innings in 12 appearances, all in relief, allowing 23 hits and 11 walks with 15 strikeouts … Tossed one scoreless inning in second game of opening doubleheader versus Missouri Baptist … Struck out only batter he faced against Brewton-Parker … Worked three innings versus Indiana Tech, giving up one run on two hits with two strikeouts … Picked up a victory at Texas Wesleyan, tossing 2.1 innings and allowing one run on three hits with two strikeouts … Gave up two runs on three hits in 1.2 innings at Northwood [TX] Univ. and one unearned run versus Shawnee State in two-thirds of an inning … Allowed one run on three hits in 2.2 innings against Embry-Riddle and worked two scoreless frames at Campbellsville Univ. … Gave up three runs on four hits in 2.2 innings at Bethel Univ. … Did not allow a run in final three outings, working one inning against Bethel at TranSouth Championships, one inning in second meeting versus William Jewell at NAIA Championship Opening Round and 2.2 innings against Tennessee Wesleyan in final game of season.

2010 (SOPHOMORE): Posted 2-1 record with 2.19 ERA in four outings with one start, tossing 12.1 innings … Allowed four unearned runs on five hits in two-thirds of an inning at Oklahoma Christian … Tossed seven innings versus Shawnee State, a career-long outing, in only start of the year, giving up one run on eight hits with career-best nine strikeouts … Tossed two innings at Campbellsville Univ., allowing a run on three hits and taking the loss … Gave up one run on four hits in 2.2 innings of relief versus Milligan College, striking out four to pick up the victory.

2009 (FRESHMAN): Posted 1-2 record with one save and 4.41 ERA in seven appearances with two starts, tossing 16.1 innings with 17 strikeouts … Earned save in final game of doubleheader at Auburn-Montgomery, tossing two innings and allowing an unearned run on two hits … Worked 1.2 innings in first game of twinbill versus Iowa Wesleyan, giving up one run with two strikeouts to earn a victory … Allowed five runs, three earned, on nine hits with five strikeouts in four innings in start at Embry-Riddle, taking the loss … Faced one batter versus Bethel College, giving up a double … Tossed 3.2 innings of relief in second game of doubleheader versus Lindsey Wilson, giving up an unearned run on three hits with four strikeouts … Took the loss in second game of twinbill at Milligan College, allowing three runs on four hits with five strikeouts in five innings … Hit only batter he faced against Freed-Hardeman at TranSouth Championships.