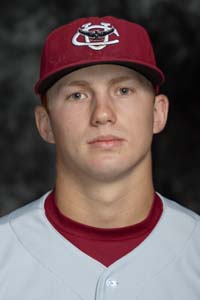 2011 (FRESHMAN): Compiled 3-1 mark with 6.12 ERA in 25.0 innings of work in 10 appearances with three starts … Allowed 28 hits and 17 walks and 29 strikeouts … Also posted one save … Tossed one shutout inning with one strikeout versus the Univ. of St. Francis [IN] and Indiana Tech, posting a save in the latter outing … Worked 2.2 innings in a start at Northwood [TX] Univ., giving up five runs on five hits with four walks … Struck out two in one shutout inning in opener at Blue Mountain and tossed two-thirds of an inning in finale at BMC … Posted first victory with six innings of work in a start at Lindsey Wilson, allowing four runs on four hits with six strikeouts … Tossed four innings of relief versus LWC for second win, giving up one run on two hits with six strikeouts … Allowed six runs, three earned, in 1.1 innings at Bethel Univ. … Worked one shutout inning at Lyon College … Posted third victory with 6.1 innings in second meeting against Tennessee Wesleyan at NAIA Championship Opening Round, allowing five earned runs on 11 hits with eight strikeouts.