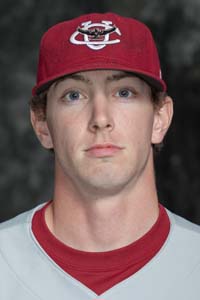 Gallatin, Tenn., native Logan Neal begins his first season as a graduate assistant for Director of Athletics Ron Pavan, helping with class attendance, organization of athletic department activities including Leadership Training in August for all student-athletes, as well as game management and marketing efforts within the department. Neal is currently enrolled in the Master's of Sport and Exercise Pedagogy program at CU.

2011 (JUNIOR): Named TranSouth Scholar-Athlete … Compiled 0-2 record with 8.62 ERA in 15.1 innings of work in seven appearances with two starts … Allowed 25 hits with seven walks and 10 strikeouts … Tossed one shutout inning versus McKendree Univ. … Allowed seven runs on seven hits in 4.2 innings in a start at LSU-Shreveport, taking the loss … Worked 1.2 scoreless innings versus Tennessee Wesleyan … Gave up five earned runs on eight hits in 4.1 innings in a start against Embry-Riddle, picking up his second loss … Allowed two hits in one-third of an inning versus Georgetown College … Allowed one run on one hit in an inning against William Jewell in opener of NAIA Championship Opening Round … Gave up two runs on five hits with four strikeouts in 2.2 innings versus Tennessee Wesleyan.

2010 (SOPHOMORE): Appeared in one game, working five innings in start versus Shawnee State and picking up a victory, allowing four runs, two earned, on five hits with three strikeouts.

AT CUMBERLAND: Redshirted in 2008 and played junior varsity in 2009.