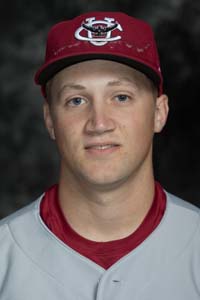 2010 (SOPHOMORE): Posted 1-0 record with one save and 4.50 ERA in five appearances with three starts, in 22.0 innings … Tossed three scoreless innings in first-ever varsity appearance, giving up two hits and striking out two to post the save against the Univ. of St. Francis … Picked up a victory with seven innings in start against Shawnee State, allowing four runs on six hits … Tossed five innings of relief at Georgetown College, giving up one run on three hits … Worked six innings in start at Campbellsville Univ., allowing four runs on seven hits … Tossed one inning versus Freed-Hardeman, giving up two runs on two hits.

AT CUMBERLAND: Redshirted in 2008 and played junior varsity in 2009.