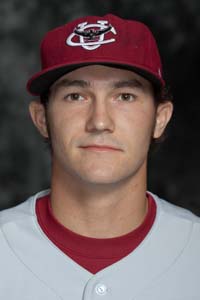 2010 (FRESHMAN): Played in 21 games with one start, mostly as a pinch runner/courtesy runner, scoring 10 runs with one stolen base … Did not collect a hit in six at-bats … Scored pair of runs and grounded into a doubleplay versus the Univ. of St. Francis … Scored once at Southern Nazarene and once at Oklahoma Baptist … Only start came versus Embry-Riddle, an 0-for-3 effort with two strikeouts … Scored once versus Georgetown College and once at Union Univ. … Added stolen base against Davenport Univ. … Scored twice versus Bryan College and once against Freed-Hardeman and at Martin Methodist.