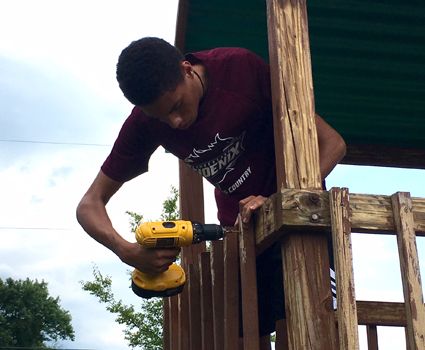 Student-athletes from football, volleyball, men’s and women’s soccer, men’s and women’s cross country and cheer/dance took part in the Leadership Training. All teams took part in community service during the afternoon, with football breaking into two groups and heading to Cedars of Lebanon State Park as well as the James E. Ward Agricultural Center.

Volleyball and cross country both worked at Lantern Lane Farm in Mt. Juliet, while men’s soccer was at Habitat for Humanity ReStore in Lebanon and women’s soccer helped out at the Wilson County Community Help Store, also in Lebanon.

”Just as our athletic staff gave back to the community last week, I think it’s also important for our student-athletes to do the same with the people who support them in Wilson County,” Director of Athletics Ron Pavan said. “This is a great learning experience for them throughout the day, to hear speakers and learn life-lessons and then also giving back to our community.”

Cumberland student-athletes for winter and spring sports report to campus later this month and will take part in Leadership Training and community service on Saturday, August 27.