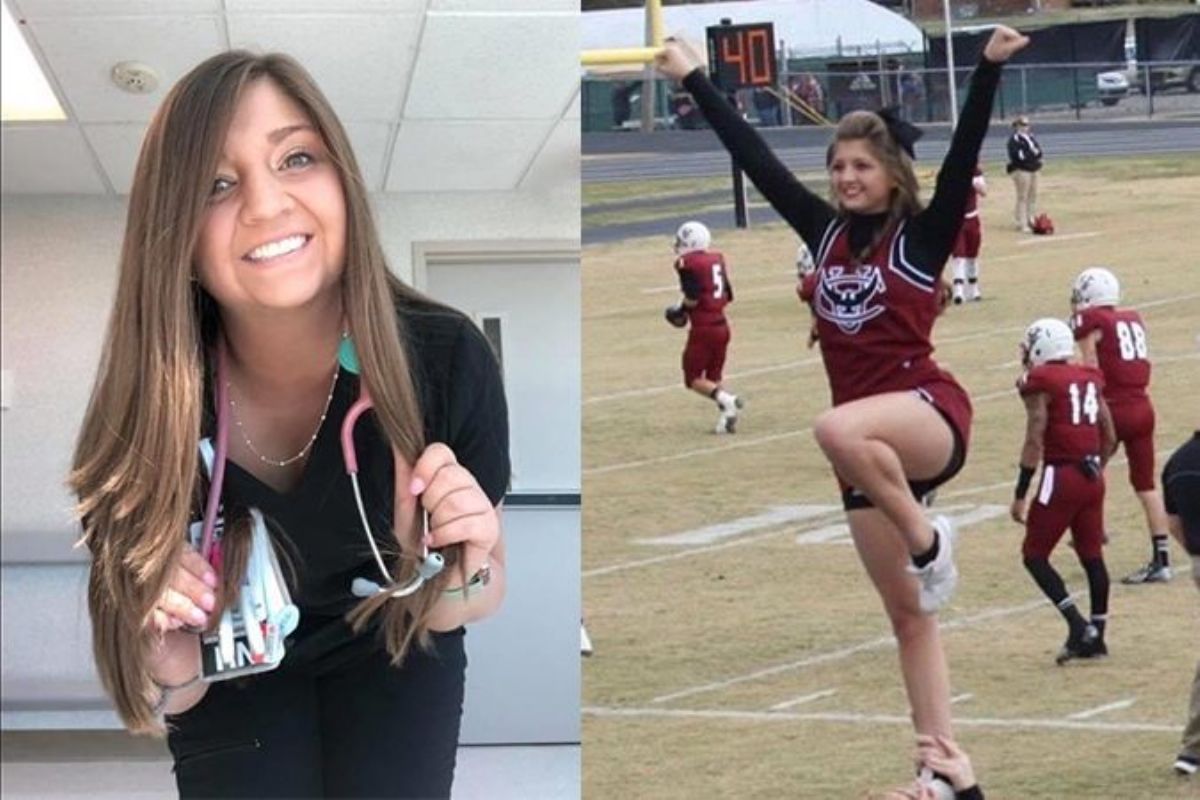 Cantrell is from Smithville, Tennessee where she attended DeKalb County High School. She was named the Most Valuable Cheerleader at her high school, the homecoming queen her senior year, and also won the DeKalb County Fairest of the Fair.

“I wanted to cheer and go to nursing school and Cumberland offered that to me. I loved that it was a small school. At Cumberland, I never felt like just another number, the people at Cumberland actually care and that was important to me,” Cantrell said.

Cantrell garnered Second Team All Mid-South Conference honors in 2015 as a flyer, but outside of competition, she wore many hats around Cumberland. She was a resident assistant, winning RA of the Year in 2015, a President Ambassador, a nursing work-study, a member of the Cumberland Chorale, Gather the 30, homecoming court attendant her sophomore, junior, and senior year, and earned Omicron Delta Kappa honors.

After she graduated with her bachelor’s of science in nursing in 2018 she accepted a registered nurse position at TriStar Summit Medical Center in Hermitage, Tennessee. She works on the Oncology, Diabetes, and Medical-Surgical floor, but she wanted to continue her education as well. She began to pursue a master’s in science and nursing with a focus on administration.

“My future career goals are to use my MSN degree to be able to move into an administrative role,” she said.

While working as a full-time nurse and pursuing her MSN degree she continued to be around the Cumberland community working as a graduate assistant for the office of advancement for one year.

“CU taught me how to juggle many tasks and do it successfully,” she added.

In June 2019, Cantrell was named the Woman of Wilson by the Wilson Post for her charismatic personality and the efforts she has given to Cumberland and her job as a nurse. The full story written by Sabrina Garrett can be found here https://www.wilsonpost.com/community/woman_of_wilson/woman-of-wilson-kaylee-cantrell/article_9ed95614-8d7c-11e9-b8bd-8f802df49fc9.html.

Before the pandemic hit, on February 29, 2020, Cantrell and her co-worker Kendall Roberts, also a CU alum and former Cumberland cheerleader were leaving work together when they saw smoke coming from an apartment building down the street from Summit in Hermitage. To their surprise, the apartment complex was burning and there was no one at the scene to help put out the fire.

“We went over there just to be nosey, but once we realized that this was real and there was no one else on the scene we just went into action,” she said.

The two scaled the burning building and were beating on doors and screaming to help get people out. They were able to get everyone safely out of the building, only one person went to the hospital for smoke inhalation, but have since made a full recovery.

Hundreds of people were left without a home that night, but everyone was able to safely get out of the building. Roberts and Cantrell were honored by the Nashville Fire Chief and by TriStar Summit Medical Center on Monday, March 2nd for their efforts.

WSMV News 4, Nashville covered the story of the fire where Cantrell and Roberts were featured and thanked by so many of the people that lived in that apartment complex. The full clip can be found at https://www.wsmv.com/video/firefighters-battle-massive-hermitage-apartment-fire/video_1e507989-864b-5c88-b445-b799e5000a97.html

The very next morning after the two were honored, around 2:00 a.m. on March 3rd the deadly tornado ripped through Nashville, Mt. Juliet, Lebanon, and Cookeville.

“I was scheduled to work the next day and it took me over two hours to make it to work. When I got there the night shift nurses were exhausted, but many of them were forced to stay because we couldn’t get there,” Cantrell said.

Cantrell experienced a tough two-week span going from helping people get out of burning building, to helping the communities that were devastated by the tornado, and finally the on-going coronavirus pandemic.

“It was a hectic two weeks, to say the least, we are blessed that it was not as bad as it could have been and I want to thank God that so many people are safe after everything we went through,” she said.

Davidson County has had over 4,465 confirmed COVID-19 cases with 41 deaths. Cantrell said that they have had their fair share at Summit Medical Center with people being isolated on her floor.

“COVID-19 did not come with a warning, nursing as a whole was forced to grow and adapt each day as we all had to learn really quickly about what was going on. Something new was presented constantly,” Cantrell said.

One constant thing that each Healthcare Hero has said is that they are very grateful for the support that has come from the pandemic and Cantrell is no different.

“In many ways, it has shown me how much the people around me love and care for me, but also how much I need them on a daily basis,” she said.

“This pandemic has revoked me of the privilege of seeing many of my family members and friends . . . that has been the hardest part for me.”

“This past week at my facility, we were finally able to see a patient leave Summit after beating COVID-19 and reuniting with his family after so long. These are the stories I am ready to see rather than the tragedy that this world is overcome with.”

Cumberland University Athletics would like to thank Kaylee and all healthcare workers for the work they have put in to help combat the coronavirus.