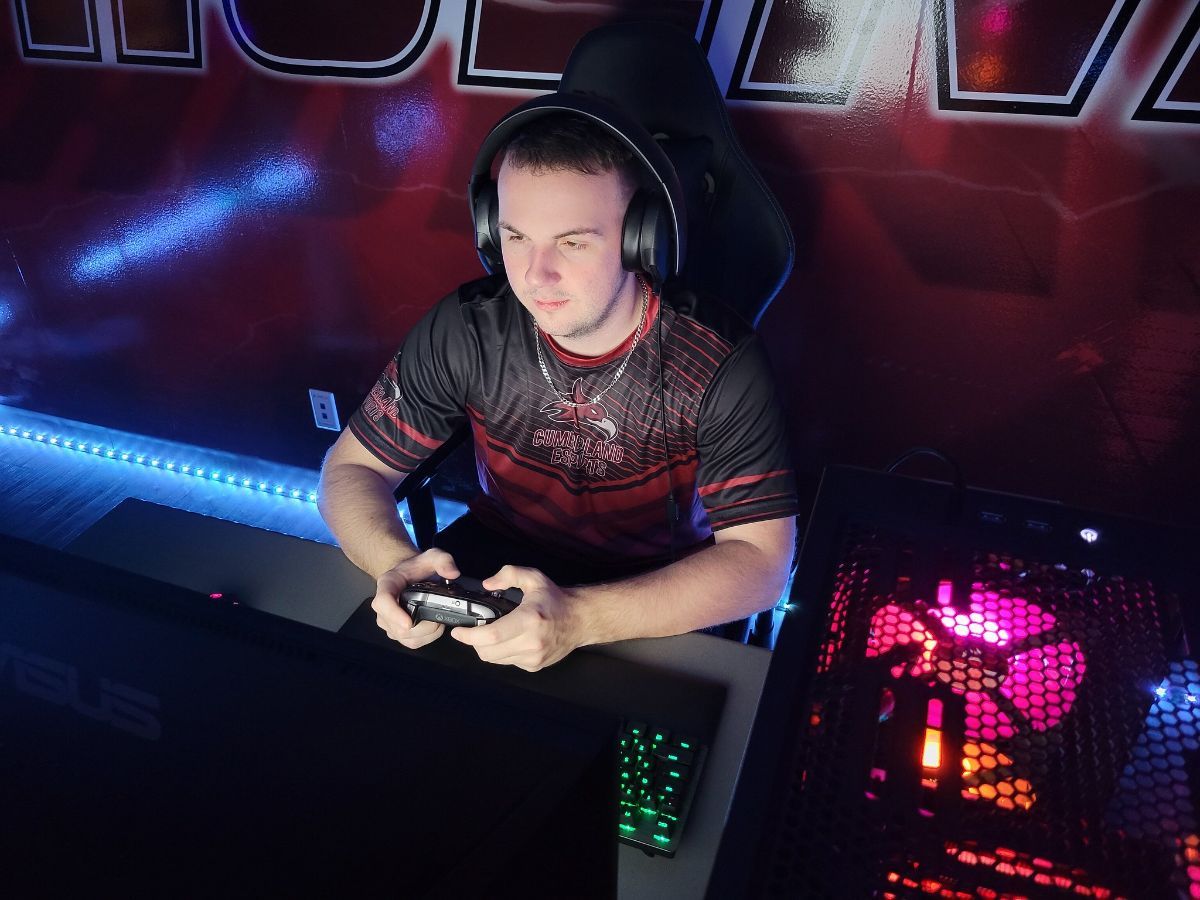 Chris Crenshaw played a big role in the Phoenix Call of Duty and Overwatch victories over the week (Credit: Casey Surma)

LEBANON, Tenn.-- Cumberland Esports had another successful week of competition, going undefeated in Rocket League and Call of Duty. As a team, the Phoenix went 5-3 on the week across all of their matches.

The Cumberland Esports Rocket League of Dominic Rodriguez, Sam Bates, and Ian Boister handled business Tuesday night with a 3-1 win over East Carolina University in NECC play. After dropping game two 3-2 in overtime, the Phoenix rallied back and won games three and four to close out the series 3-1.

The Phoenix then turned their attention to Shawnee State

Cumberland started the series dropping the first game 3-2 in overtime and answered with a 3-0 win in game two. The Bears had the Phoenix on the ropes after a 4-1 defeat in game three, but CU rallied off back-to-back wins in games four and five to win the series 3-2.

The Rocket League team will be back in action on Tuesday, Mar. 1, at 8:15 PM against South Alabama in NECC play.

Nathan Nelson went 2-0 against New England College. To start game one, Nelson was down 20-7 heading into the half. A quick score and a turnover by his opponent catapulted Nelson to a 21-20 lead going into the fourth quarter. Nelson scored the final touchdown of the game on a game-winning drive to earn a 27-26 victory.

Going into game two, Nelson forced two turnovers early and turned them into touchdowns, establishing a 14-0 lead. Nelson's dominance forced his opponent to concede the game and the series at halftime with a score of 35-7.

Austin Bush started off slow in his first game against New York College. Due to various miscues, Bush dropped game one 42-17. Going into game two, Bush found the endzone three times with one touchdown coming on a pick-six to take game two 21-17. Game three was back and forth between the two, which resulted in a 10-10 tie heading into the fourth quarter. New York College scored the final touchdown of the game to win 17-10 and the series 2-1.

Jaylen Taylor started game one hot, establishing an early 14-0 lead over Muskingum University. Defensive mistakes by Taylor allowed Muskingum to tie the game at 14 going to the half. Continuous miscues set the stage for a 23-18 victory over Taylor in game one. Game two was also a back and forth affair, but a game-winning drive by Muskingum earned them a 28-21 victory to go along with a 2-0 series win.

The Phoenix will be back next week for a full slate of Madden on Thurs. Mar. 3.

The CU Call of Duty team of Dominic Rodriguez, Blake Fraley, Chris Crenshaw, and Ian Boister put on a clinic against Morehouse College on Tuesday evening. The Phoenix earned a dominant 3-0 victory over the Blue Raiders, beginning with a blowout 250-24 Hardpoint win from Bocage. Cumberland then went on to earn a 6-0 Search and Destroy victory on Berlin. The Phoenix closed out the match with a 3-0 win on control to sweep the Maroon Tigers.

The Cumberland Overwatch team of Chris Crenshaw, Dominic Rodriguez, Logan Wilson, Matthew Reynolds, Blake Fraley, and Preston Olivier captured a 3-0 win over Southern Illinois University in NECC play. The Phoenix captured a 2-0 victory in a nailbiter on map one Lijang Tower. Going into map two of Hollywood, the Phoenix held SIUE in their spawn and captured the point to take the map two victory. The team carried their momentum into map three of JunkerTown to easily secure a 3-2 victory on the map and, taking the series 3-0.

Cumberland faced a talented Shawnee State team on Friday night in Mid-South play. Cumberland dropped the first map 2-0 on Busan to go down 1-0 in the series to the Bears. The Phoenix played well on the next map but fell in a tightly contested game in escort from Havana 3-2. The final map of the match was Havana in hybrid and the Bears topped the Phoenix 2-1 in the final game of the day to fall 3-0.

The Overwatch team will be live in NECC play on Thursday, Mar. 3, at 6 p.m.