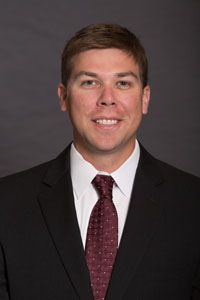 Klay Koester begins his first season as the offensive coordinator and quarterbacks coach at Cumberland University after spending the last five seasons as wide receivers and tight ends coach at his alma mater, Eastern Kentucky.

The Colonels played in the NCAA FCS Playoffs twice in the last four seasons, including 2014 when EKU finished 9-4 overall, averaging 31.2 points per game and over 400 yards per game in total offense.

He has also served as the kickoff return coordinator during his second tenure at EKU, with the Colonels ranking 12th nationally in kickoff return yards in 2014 and 13th in 2010. Jeremy Caldwell was the No. 2 kick returner in the country in 2010 at 33.7 yards per return.

Koester coached one year at McMurry University in Abilene, Texas, under head coach Hal Mumme. Marcus Franklin and Delfonte Diamond were both selected All-Conference for the War Hawks during his one season as wide receivers coach and kickoff return coordinator.

He began his coaching career as a student assistant at EKU from 2005-06, helping with quarterbacks and wide receivers, including signaling plays and coordinating summer 7-on-7 summer leagues as well as assisting with on-campus recruiting.

Koester then moved into a graduate assistant role with the wide receivers and quarterbacks in 2007 and 2008, where he helped the Colonels win back-to-back OVC Championships. He assisted the offensive coordinator with the pass game for that week’s game and signaled plays.