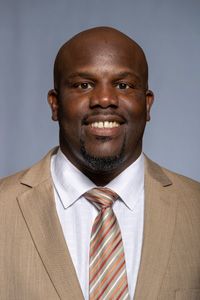 Jerrell Cogmon begins his second year as the B-Backs coach for the Phoenix.

During his playing career, Cogmon played at Bethune-Cookman University in Daytona, Fla. where he was a three-year starter and a three-time Mid-Eastern Athletic Conference selection. In 1996, he was the team defensive MVP and was voted a team captain. As a Junior, he led all linebackers with interceptions with a total of 5, then as a Senior he led the team in tackles and sacks. He is still statistically one of the best linebackers to play at Bethune-Cookman.

Cogmon’s coaching experiences began in 2000 where he held numerous titles from offensive and defensive coordinator to head coach. He has coached at both the High School and College levels. His most recent coaching endeavors have been at Stratford High School in Nashville, Tenn. where he began as a defensive coordinator in 2014 and was promoted to the head coach position in 2017.

Cogmon’s coaching has landed him numerous awards such as a member of the Coaching staff of the year in 2000, he was nominated for Assistant Coach of the Year in 2001, and his defense was rated top 5 in the most competitive region in the state according to USA TODAY.

Cogman earned his bachelor of Science in Specific Learning Disabilities/Varying Exceptionalities from Bethune-Cookman University. He then proceeded to get his Master's of Science in Management and Education Administration from Nova Southeastern University and is currently pursuing his Doctoral Degree at Walden University.

Cogman has been married to his wife Romana for the past 21 years and they have two children-- Jayla and Janae.