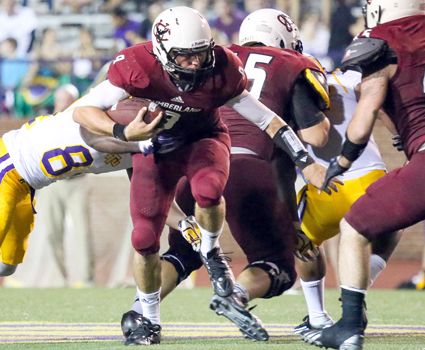 PHILIPPI, W.Va. – Cumberland quarterback Broc Loveless rushed for 152 yards and a touchdown, and Fredrel Cross added 110 on the ground with a pair of scores as the No. 23-ranked Bulldogs defeated Alderson Broaddus, 41-17 in the final game of the regular season Saturday at Alderson Broaddus Stadium.

The Bulldogs (7-4) finished with 409 yards on the ground and 477 total. The squad capitalized on big plays defensively, as well, recording a pair of interceptions and 6 sacks. Senior Nick Lennox tallied 4.5 sacks on his own.

Alderson Broaddus took its first possession after a three-and-out by the Bulldogs to open the game. The Battlers opened the drive with a 25-yard run, but the drive stalled out. Lining up for a field goal, Cumberland’s Devin Guthrie got a hand on the ball for the block.

Momentum moved in the way of Cumberland for the rest of the first quarter as CU outscored Alderson Broaddus 21-7. The first scoring drive came immediately after the blocked field goal. After a five-yard loss on first down, Broc Loveless broke free down the sideline for a 68-yard carry down to the Battler 10. Fredrel Cross took the next carry 10 yards to pay dirt to give the Bulldogs a 7-0 lead.

Following a punt from the Battlers, CU used an eight-play, 62-yard drive to grab a two score advantage. Loveless found Anthony Woodard for a 16-yard connection in the end zone, extending the lead to 14-0.

Alderson Broaddus responded with a touchdown the following drive to cut the lead in half. Facing 4th-and-4 from the home 45, AB faked the punt as backup quarterback found Malcolm Lee wide open for a 55-yard score.

Cumberland answered in the following drive, marching 62 yards in 10 plays including a 27-yard carry from Cross. Loveless punched the ball in on an eight yard carry.

Another 10 play drive from the Bulldogs in the second quarter, ending in a 1-yard carry from Caleb Blance, marked the lone score in the frame. CU was methodical on the drive, facing third down just twice, both of two or less yards.

In total Cumberland rushed for 270 yards in the first half. Loveless led the charge with 96 yards, while Reed Gurchiek and Cross added 66 and 60, respectively.

The offenses struggled in the third quarter as each team connected on a field goal apiece. Beau Baker’s 36-yarder gave the Bulldogs a 31-7 advantage. Baker would connect on a second field goal from 25 yards with just under five minutes to play in the fourth quarter.

After an AB touchdown on the opening play of the fourth quarter, a 57-yard strike to cut the lead to 31-17, CU again found a way to respond. The answer came in the form of a Fredrel Cross 58-yard carry on 3rd-and-6, and just like that, the lead jumped to three scores again.

Cumberland finishes the season with the most wins among 17 football-playing schools in the state of Tennessee. The Bulldogs have compiled a 30-13 record over that time frame.