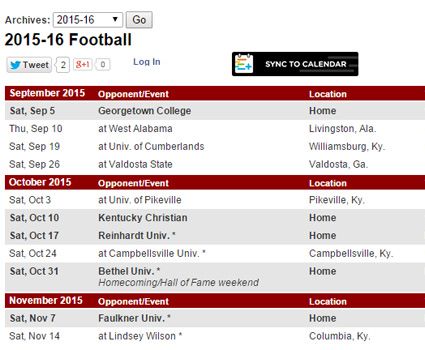 A new feature has also been added for this season called Sync To Calendar, which appears at the top of each sport’s schedule page as well as on the front page at www.GoCumberlandAthletics.com. Hit that button and follow the prompts to add schedules to your calendar for reminders and information on upcoming contests, including links for live stats, video, audio, Facebook and Twitter for the coming 2015-16 academic year.

Volleyball begins the 2015 fall slate for all Cumberland athletics with a 6 p.m. home match on August 26 against Bethel University at the Dallas Floyd Recreation Center. The football team opens the home slate September 5 versus Georgetown College while women’s soccer hosts Olivet Nazarene on Aug. 30 and men’s soccer plays its first home match Sept. 8.