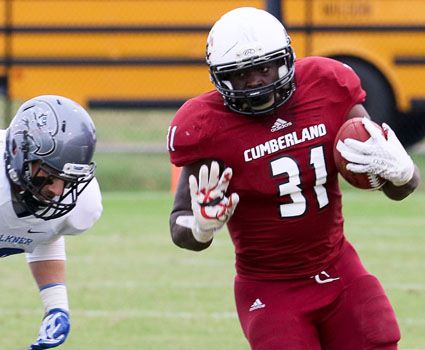 LEBANON, Tenn. – Moses Cornelius rushed 28 times for 144 yards, both career-highs, but Clayton Nicholas passed for 299 yards and three touchdowns and Faulkner used the big play to post a 33-14 victory over Cumberland on Senior Day here Saturday at Nokes-Lasater Field.

A.J. Stevenson caught a 75-yard touchdown pass on the second play of the game and wide receivedr Jonathan McNair tossed a 68-yard TD to Rob Lockhart in the fourth quarter for the final score of the game.

Cornelius and Austin Chaplin each scored from a yard out in the first half, but the Bulldogs (3-7, 0-4 Mid-South West) managed just 107 yards of total offense in the second half.

Justin Snyder finished 20-of-39 passing for 169 yards but three more interceptions, two of which were tipped by Cumberland receivers. The CU defense minimized the damage from the turnovers, allowing just seven points and keeping the Eagles at bay most of the day before the 68-yard touchdown pass with 6:33 remaining put the game away for the Eagles (6-3, 2-3).

Nicholas completed 21-of-43 passes with three touchdowns despite one sack, nine hurries and numerous other hits from the Bulldogs, forcing the freshman to miss one play. Faulkner rushed for just 49 yards, with 28 of that from Trent Miles on the final drive of the game to run out the clock.

Faulkner struck quickly, with Nicholas hitting Stevenson for a 75-yard touchdown on the second play of the game after the Cumberland cornerback fell down.

Joseph Rushin returned the ensuing kickoff 30 yards to the CU46 and the Bulldogs moved to the Faulkner 13 thanks to three rushes for 28 yards by Cornelius. A snap over Snyder’s head pushed the ball back to the 34 and Josh Bates’ 32-yard field goal was blocked by Caleb Taylor.

The next Cumberland drive was stopped on downs when Cornelius stumbled in the backfield on 4th-and-2 from the CU46. Faulkner took over and the CU defense held, but a roughing the kicker penalty gave the Eagles an automatic first down. Four plays later Hunter Kennamer booted a 30-yard field goal and the visitors were ahead, 9-0, with 4:35 left in the opening period.

Cumberland got on track offensively on its next drive and was also helped by a penalty, this one a facemask against Snyder that gave the home team its opening first down of the possession. Snyder hit Brandon Mallory for 17 yards to the Eagles’ 16, with Mallory hurdling a defender during the run.

Chaplin’s catch in the flat got the ball to the one and Cornelius plunged in from there, cutting the deficit to 9-7 just 27 seconds into the second quarter.

Stevenson caught 12 and five-yard passes and two questionable pass interference penalties allowed Faulkner to move down the field on the ensuing possession. Nicholas hit Rob Lockhart over the middle for a 27-yard TD pass and a 16-7 lead.

The Bulldogs answered with another long drive, moving 81 yards on 12 plays, most of that from Cornelius, who rushed four times for 27 yards and also caught a 25-yard pass on the drive. Trevon Jones rushed around left end for 16 yards and Chaplin carried the last two plays for five yards, including a one-yard TD, making it a 16-14 contest with 2:23 before the half.

Faulkner moved quickly down the field before intermission, though, with a 28-yard completion to Shante Rogers and a 15-yard roughing the passer penalty for hitting Nicholas in the head. The drive stalled after the penalty and Kennamer booted a 37-yard field goal for a 19-14 Eagles advantage.

Michael Green returned the kickoff 55 yards for the Faulkner 38, but Snyder’s pass tipped off the hands of Al Thompson and was caught on the ricochet by Keith Turner, ending the half.

Faulkner went into the bag of tricks midway through the final period, with McNair throwing a 68-yard TD pass to Lockhart, who twisted and turned two CU defensive backs the final 30 yards for the score and a 33-14 advantage with 6:33 remaining.