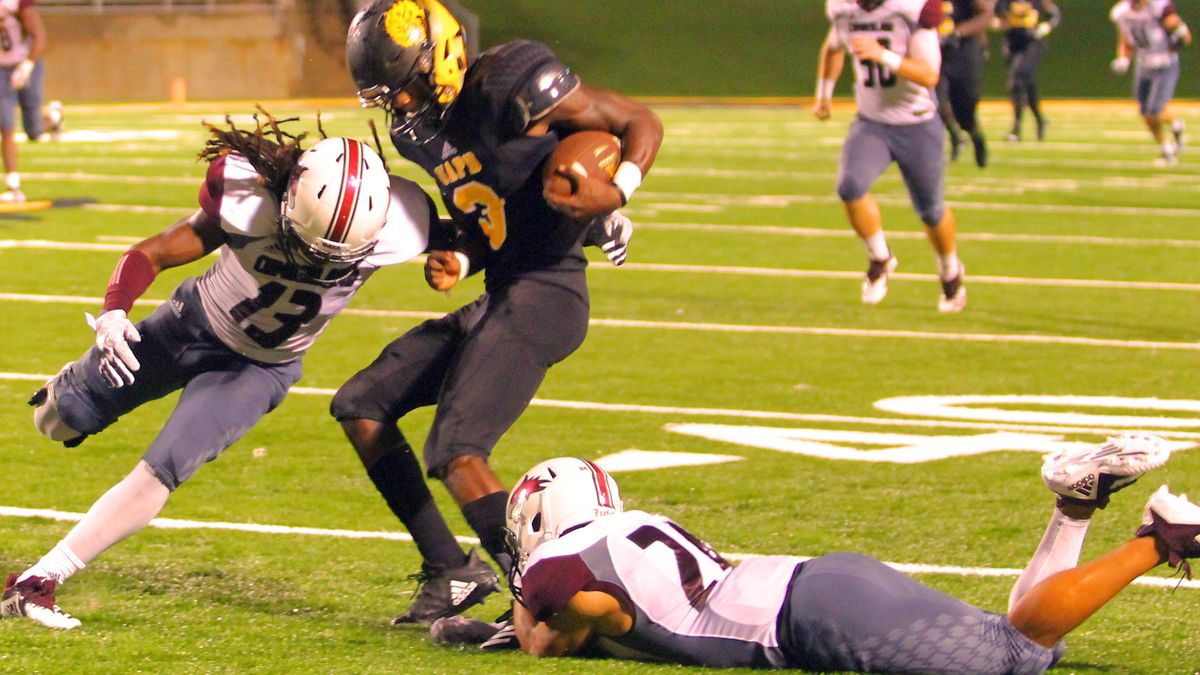 Just after warm-ups were completed, lightning delayed the start of the game by 30 minutes and then an hour. Within that hour torrential rain engulfed the Pine Bluff area, leaving standing water on the artificial turf playing surface at Simmons Bank Field. Flash flood warnings were issued for the area, causing more delays.

After more than two hours, the teams finally returned to the field to stretch and warm-up and kickoff, originally set for 6 p.m., finally took place a little after 8:30. The Golden Lions (1-1) wasted little time, with Shannon Patrick tossing a 66-yard touchdown pass just four plays into the game for a quick 7-0 UAPB advantage.

Cumberland (1-2) put together its best drive of the game on the ensuing possession, moving 36 yards on 13 plays, converting three third downs on the drive. Telvin Rucker and Joseph Rushin both rushed for first downs and Dezmon Huntley hit Denarius Toliver for another conversion.

The teams combined for minus 11 yards on the last four possessions of the opening quarter but that changed when UAPB took over at its own 16 just nine seconds into the second period. The Golden Lions moved 70 yards on 13 plays.

Skyler Perry completed 5-of-7 passes for 57 yards and rushed three times for 15 yards on the drive. UAPB stalled inside the CU20 and Jamie Gillan converted a 31-yard field goal for a 10-0 home team advantage.

Arkansas-Pine Bluff covered 60 yards on seven plays on its next possession, with Patrick completing three passes for 33 yards. Taeyler Porter gained the final 15 yards on three runs, including a five-yard TD.

Tyrin Ralph returned a punt 58 yards for UAPB after a 3-and-put by the Phoenix and Patrick tossed a 40-yard touchdown pass on UAPB’s first play on the following possession. The Golden Lions scored again just before the half, moving 82 yards on five plays in just 33 seconds.

Patrick hit throws for 31 and 19 yards and his 17-yard TD pass to Josh Wilkes made it 38-0 at intermission. UAPB gained 328 yards in the first half, more than Cumberland had allowed in either of the first two games this season, while CU struggled offensively, posting just 95 yards of total offense, including 4-for-11 passing for 21 yards.

Arkansas-Pine Bluff recovered a fumble near midfield and Porter rushed 37 yards through the middle on the second play for a touchdown to open the third quarter. Roger Totten II scored from a yard out late in the third quarter for another UAPB TD and Zack Piwniczka booted a 47-yard field goal with 6:13 remaining for the final points of the contest.

Rucker carried 13 times for 69 yards to lead the Phoenix while Luke Turner added 47 yards on eight carries. Cumberland rushed 46 times for 132 yards in the game.

The Phoenix travel to south Florida next weekend for an 11 a.m. Central Time kickoff at Ave Maria University.